In October 22, 2018, is a field trip to New Lab in 19 Morris Avenue, Brooklyn, NY 11205. New Lab is a Old Big remodel facility located on the Brooklyn Navy Yard. Back in the 1900s during WWI & WWII, this area used to be a factory yard where they build Navy ships to send them to war. Today, this place called New Lab is a facility where all engineering companies join together and produces some advance technology such as A.I, 3D Printing, virtual reality and more. First, they represent a piece of item made from 3D printing that is supposed to be the part of the rocket’s nozzle and showed us a video of testing the item. Then, they introduced the 3D printing which is very big to produce anything lesser than its sizes and showed us some nice items created by the 3D printing. I’ve never seen how a 3D printing actually works until to this day and I was quite amazed when they also introduced one of the produces that they call eco-friendly and it does have some great advantages of benefiting the ecosystem.

Over the last few days, this project was actually one of the most toughest challenges I’ve ever done and I’m actually very glad for putting my effort in this project. I had quite fun, I’ve learned a lot, but not just the animation process but also get to experience the power of photoshop and how’s it like to stay up late up to 8:00 pm to proceed my project. At first, when we all started the animation process, I was very confused and did not know anything about photoshop nor the process of animation. The good side is that I am a fast learner and I had something special in mind before we started and I had it all planned. However, I was expecting some complicated things during my project which is trying to sync all the figure with the music, time consuming, and finding out the piano melody from a suggestion of a partner. I feel so relief and accomplished for my successful project, everything turned out great and good to go. Although, they say that this is just basic animation work and I assuming this is a level for amateurs but I wanted to take a big step forward, break the borderline with my imagination. The more creative I want my animation to be the more complicated the work will be and I accepted it as a challenge. What  I could’ve done better is to make the design better for the animation and I could used one of my short mix song saved on my phone so I could actually work on two songs.

So this link on the top is a minimum of 10 seconds animation that I’ve been working on for the last few days or so and with the element that I especially created for this song, it all turn out great. Before when I started doing the animations, Professor Spevack introduced us some short animation clips of students work from last year and honestly I don’t know why I’m impressed so I though in mind that instead of using the previous figure that I did in phase 2, I can actually redesign the image that for every image will represent all parts of the instrument playing and my challenge was to take these images and try to sync them in the music so the figure can get the feel of the rhythm. 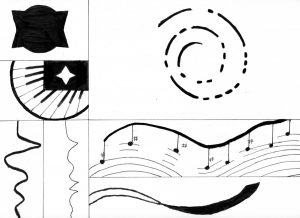 It had taken me more than 2-3  days (around 5 hrs per day) to actually get all the parts set up and sync however with another 1-2 days, when I thought that I’ve finally finish my project, the moment I render the video and click the play button, all parts of the image were slightly un-sync and I had to check it again to see what was the problem. The good side is that all the transformation of every image follows up the rhythm of the song and I only had to move the transformation one sec before or more, add some transformation parts for some images and it took me two tries to get it right.  And finally I’ve completed my project and I was so relief. Unfortunately, this video only plays one song and according to the project, I had to mix two songs and I decided to ignore that part because I’ve made it this far and it would be very stressful for me to go through the whole process again. The name of this song is “Ninelie” by Aimer feat. Chelly, and the genre is J-pop (Japanese pop). It has this very relaxing and smooth rhythm with the amazing breathy vocals. 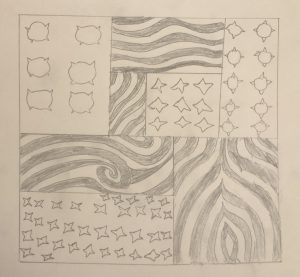 So the song that I choose to make these thumbnails on the image is “Want You” by Rynx feat. Miranda Glory and the genre of this music piece is based on pop/ electronic. Most of the thumbnails have these wobbling scripts and they represent the vocals and/or the bass of the music played and they’re also known as legato figures because it has this very slow and flow rhythm (for some of the wobbly thumbnails).

The top left is a bit unusual  and it is also known as staccato because all angles and lines are connected together and it has this very pointy edged that in music represents a rhythm that all different pieces are connected. These thumbnails are only instruments that are played on the music and hearing each part of the instrument I reimagined how they would look like and redesign it using my perspective image. I understand that the artist is showing signs of excitement and show it’s unique style of music and it the reason it’s one of my favorite songs is for the the amazing vocals and melodies that the artist is using as well as the amazing rhythm and potential on the bass/ percussion part.

The story that I decided to work on is “Here Poverty and Privilege are Neighbors; Income Gaps are a Source of Resentment and Guilt by Janny Scott because the word poverty was the first phrase that my eyes first caught before reading through the stories. Every single day I see many homeless people roaming around the streets and I always wonder how did they ended up into this mess and as a New Yorker, I believe it’s important for me to know about the issues between society and poverty and why are there people falling behind our backs. My expectations though this article will probably be the problem of the the populations and high income tax, it makes sense to put these reasons for the cause of poverty because it could be difficult for people to find available rents homes or apartments and income taxes are very high on these days now. For instances, in New York City, there are millions of buildings and/ or other facilities surrounding the city and most of them are unavailable rent for the cause of the dramatic increase of the population and the income taxes rapidly increasing and for some cannot catch up and they end up bankrupt leading to poverty for themselves. It would also be great what New Yorkers think about other people from different states or foreign people.

“A defining characteristic of New York City is its economic diversity, the juxtaposition of people of disparate circumstances in limited space.”

“The gap between top and bottom is greater in New York than in most cities in the country and people at the extremes often live closer together.”

“And as the population swelled and real estate price soared and crime wanted, the affluent pushed deeper into neighborhoods they had once shunned.”

All of these three passages are stated form the article,”Here, Poverty and Privilege are Neighbor; Income Gaps are a Source of Resentment and Guilt” by Janny Scott and all support each other because in New York City, it’s always a busy city and very crowded with people as the population increase. Therefore,  New York had to restricted the limited space it has left. With all the people currently living in New York City, all streets, houses and buildings are very close to each other even the neighbors do either live extremely close or living together with no choice, considering to the limited space that I’ve talked about earlier. Most New Yorkers would describe New York City very expensive for the real estate price soaring, tight for the building and/ or other facilities being too close to each other and somehow rarely unsafe for all the crime happening around the streets and it could be any day now hearing police sirens suddenly appearing out of nowhere. These passages describes the life of New Yorkers  and knowing that one day after another will never be the same.