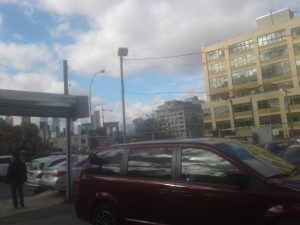 The way I see Juxtaposition is that there is a lot of things going on in a photo. From the very top of the photo, to the very bottom. To the left and right as well. To me the photo shouldn’t be clearly right away. People should have time to look at the photo adjectively and be able to make their own opinions about the photo. They should think about how a photo shows juxtaposition. For an example I will be showing a picture of a place around Fulton street. I took this picture because there are objects in the picture that takes a lot of empty space in the picture. To me the way this photo shows Juxtaposition is the relationship between a dark tone and a light tone and size comparisons. The photo I took a picture of shows multiple cars at the bottom. A large building on the right and a bunch of smaller buildings on the left. The car at the bottom is dark red color and the rest are a grey color. The red pops out because not only is it a different color then the rest of the cars. It’s also the closest to the camera. Making it appear bigger than the other cars by comparison. On the left side of the photo that I notice was that it has more dark and bland colors than the right side. For example, there is a person the is black silhouette of a man on the bottom left and a grey structure above him. The buildings are also fade towards the back and there roughly the same color as all the other buildings. Another thing I notice on the left side was that there were more trees and street lights.

Now on the right side of the picture was that it has a large building that takes up most of the right side. It has much lighter color compared to left side’s darker tone. This building is what really makes this photo stands out the most. All of the other buildings in compassion aren’t as important. There just there to make the larger building more noticeable. Putting more focus on the building. Just like the photo goes from dark to light when going from left to right, the does the same thing going up and down as well. For an example, there are bright and colorful clouds at the top of the photo. And the more you go to the bottom the photo to get darker, shown by the dark red car and the grey buildings. This adds a lot of contrast and depth to the picture. The beautiful sky above and the dark and boring ground below gives you mixes feelings. At first glance you would think that this is just a parking lot. Nothing special about. But you can some interesting things about this picture. Like how previously stated that there is a relationship between dark tone and light tone. Like the sky is blue but the red cars reflect the sky is grey supporting the dark and light comparison.

Even though there are some differences between the left and the right side of the picture, there are some similarities. Like how they both have cars on both sides, a long chain gate that goes across the picture, they both have a bunch of buildings, and how the cars and the buildings line up with each other, for example the red car is the biggest and the most noticeable car compared to the others. The same goes for the building in the back. The other buildings are smaller and more basic looking then the one on the right. This photo gives somewhat of a urban vibe. The rusty guarders and buildings all the way at the back, a bridge. The construction cones, The dying tree in the middle of the picture, moss next to entrance to the left, a dirty puddle next to the car on the left, etc. The second most noticeable thing in this picture is the black silhouette of a man at the bottom left. Why is he there? Nobody knows. It’s so random. It’s like this guy came back here to where he used to live back when he was a kid. Supporting my claim that this gave a urban vibe.