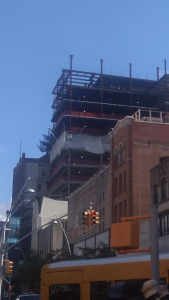 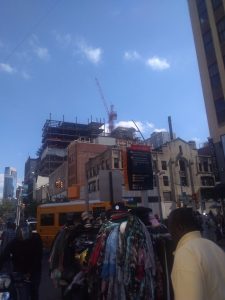 New York City is always under construction, nothing stays the same. Buildings are either torn down and replaced, being remodeled or renovated. You’ve probably walked past a store remembering it used to be something else, surprised at what it is now. The image above represents a juxtaposition of something old and something new. It also juxtaposes the past and present.  New York is always changing, it’s a city that’s always evolving. Every New Yorker has a different map in their heads. In a city that’s in a constant state of change, people have multiple maps.

The building being constructed looks far from being complete, it looks as though the construction workers are working on the framework of the building. While standing in front of the building, you hear cars honking and people talking. The sound that dominates the most are the loud noises coming from the construction site. You can hear the cracking of the hammers as they are slammed down on metal, the drilling sounds from a jackhammer forcing its way through concrete, and the sounds of saws slicing its way through the wood. You see orange and blue sparks in many different parts of the building from the power saws being used to cut through metal. I wonder what this building will become, what it will be used for, and what was there before it was built.

The time in which these buildings were made sets them apart. The old buildings are rusted and the color of the paint is fading off. Some parts of the structure of the building may or may not be weakened. The new building has yet to be finished. Soon this building will have a stronger structure built to last for decades. The building design will be an improvement compared to the buildings surrounding it. The buildings surrounding the one being constructed represent the old. They are all a constant reminder of the past, and what was once there before. With the constant installation of a buildings New York is always changing its image, and the old building s is a reminder of what it once was. The building being constructed represent the new, the future. It symbolizes progress and improvement each design is an improvement of the one last used. This building also encourages people to adapt to change.

I took this image because it reminded me of the article, ” The Way We Live Now”, written by Colson Whitehead. The article talked about how everyone has their own version of New York. Colson writes, ” Never listen to what people tell you about old New York because if you didn’t witness it, it is not a part of your New York …,” That made sense to me because as a Newyorker myself,I know that New York is a city that’s always changing the way it looks. With the constant new additions of buildings and the demolitions of other buildings, New York is always reshaping its image. I also think that everyone has multiple versions of New York, not just one. Some buildings are destroyed or renovated. I’ve seen a small building change from a grocery store to another different grocery store and eventually a Chinese restaurant. Who knows, If  I went there now it would probably be something else.

Although some buildings are destroyed and erased from the map of New York City, each building will forever be remembered in the many maps created in our minds. The buildings that used to stand by the buildings that were once there reminds us of the time when they were. With every new building installed and the building destroyed we adapt to the changes and create a new map. This is the map we will use to get around in this ever-changing city. Just Keep in mind that this map will never be the same.