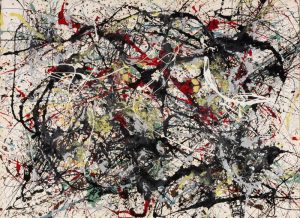 Hello, my name is Veronica.  My major is Communication Designs, and I am specifically in this major for photography. The reason why I chose this painting by a famous New York City artist Jackson Pollock because I love the idea behind it. It’s chaotic with no thoughts or idea. It’s almost like the artist didn’t plan it, it just happen. He wasn’t thinking or contemplating. He allowed his hand to guide him and which that, this master piece as been made. I like how this art shows there’s no rule or order. That the artist didn’t have focus on a subject or object and just simple copy it.

It came from his imagination where something was going to be different. This shows my personality where I am a rebel. I don’t go by society expectations. This kind of imperfection that wasn’t meant to be perfect, but came out to be in a sort of way. My ideas and how I think is kind of what the painting shows what goes inside my head. These lines with no direction or pattern, almost unpredictable. That you never know what to expect, but you know it’s going to be huge. It’s like this explosion of ideas, like when people have a light bulb that lights up.

For photography, I take pictures of architecture and other objects where it will be just some random thing I have encounter. the relationship between the this painting and the pictures I take is that there’s isn’t a rule to follow and gender. I like the idea of a gender less artwork.  In 10 years since it’s more time to think about my future, I’m going to have my own place with a lot of photography equipment. I either will be a traveling photographer because I always wanted to see the world, and why not combine the two things I love and have it as my job, or a freelance photographer where it’s anything I want to take pictures of while telling a story.

As for the painting itself, I chose this particular one because not just of the amazing colors scheme that has been used, but also for the movement of the lines. It doesn’t follow a path, each line is on their own, but also the shapes that is form that is organic and natural than geometric and sharp. It’s almost like with each new line form, they all were made with different emotions which i believe represents me because my emotions ranges and changes by a second so I thought how the movement of it shows that.. Meanwhile, others with a different perspective or point of view may misinterpret that painting as me into artwork, particularly painting by itself, or that the colors are dark, so I am a sad, depressed, or angry person which is all false since the artist himself was an angry man who smoked.

Artistically the artwork speaks me because my favorite is splatter paintings, but I do like paintings in general compare to   any other artwork that I have encounter throughout my life. As for my bio itself, I just gave the simple information on what major  I am in and that’s it, since I know if I keep going on about myself, it will be to long and lose interest so I keep it blank since I also like  to be a mystery to people. There is not much to say now about my avatar and how it relates to me as a designer. However, I do have to say that the artist and me share some similarity, but are mostly opposite from each other. If I had to recreate his work into my own master piece, I will focus on  my mood and what I feel to help direct my hand since the paining will be based off of each feeling as if they are their own person.