My full name is Klever Javier Cobena Ramirez (crazy long i know). I am a Freshmen here at City Tech. I am 18 years old and I am of Ecuadorian and Salvadorian descent. I live in the Bronx (6 line) and I’ve had a passion for visual arts for as long as I can remember. Ever since I could even speak, I used to always tell my parents how much I wanted to be an “art-teeest” as I used to say it. Growing up i became more and more fascinated in the way art was used to decorate the world around me, and how important it was to so many people in being able to express ideas and imagination. I began to draw and paint every single day. I used to carry my mini sketchbook with me everywhere I went. In it i would have such childish but imaginative and crazy drawings, which till this day, I still possess that free style in my work. I used to beg my parents to take me to the MOMA almost every weekend, after my first time visiting it when i was in first grade. I continued to grow more and more inspired, although when i reached high school, I had dropped my passion for it due to an unexpected tragedy in my family. However, i decided to continue to pursue what i have always known and loved, and i decided to make it my major in college and re-ignite that passion I’ve always had. I aspire to be an animator or a concept artist in the future, and pursue making a living out of what i love to do. I can imagine myself in the future creating beautiful and complex works of concept art, that can potentially be brought to life through a video game or a feature film. THAT is what I want to do, and be successful at. A few years from now, when technology advances even more than it already has, i want to see my name in the credits of the newest blockbuster film or the hottest new video game release. Some words that describe me as a person are Timid, Stubborn, and Adventurous. Though I can be hard headed over small things sometimes, I’m pretty likeable and easy to get along with. I’m always the type to be very timid to speak when I’m around new people, but once you get to know me, I could talk about just about anything for daysss. I also love to discover and travel, and get into new things. Some things I’m into are baseball, DC comic heroes, drawing/creating/writing, anime, science fiction, horror and fantasy books, and traveling. I am more specifically a huge fan of the hunger games series,the Dragonball series, and Halo. I’m also really into Music and the performing arts (more specifically Broadway musicals), as i went to a performing arts high school, where I did many amazing things like be a part of huge concerts and shows, and met many famous music artists, performers, and actors. 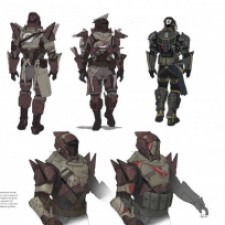 There are many reasons and aspects as to why I chose this Avatar for my profile. My avatar consists of a piece of concept art created by Bungie Studios, for a video game called Destiny. Its almost like a design or blueprint, so to speak. A concept artist created this character and designed him, before creating it digitally through the game. Not only am i a vivid player of the Destiny video game, but the art and character design in the game are simply fascinating to me. The aesthetic care and imagination that went into creating this “world” is mind blowing. Every time I play i can’t help but think of how amazing it would be to one day create such vivid and fantastical worlds and characters, and have them come to life in such a way. I aspire to be the one to create such concept art, after being inspired for so many years through movies, TV shows and other entertainment media.

Though my Avatar to me is a symbol of the passion I wish to pursue, there can be all types of interpretations as to why I chose it. Knowing a lot of people who are fans of the Destiny video game, anyone of those or other individuals could simply assume i just love the game. There could also be inferences that i have a pinpointed passion for just video games, which is not the case at all. Yes, i do love the game, but my main perspective is the art and passion that went into creating every single aspect of that game. Especially the concept art, which like I mentioned before, is something I’m pursuing to do. Through my entire profile, i wish to relay and make clear what I pursue, and how i plan to get there.