In the first slave advertisement it is a reward of $20 to find the slave named Joe. They give a brief description of his outer appearance saying how tall he is (5’4), well-built and that he has no beard. He is also 20 years old. Also they mentioned that he has a scar on his face in order for others to recognize him. The article warns captains to not harbor this slave and if spotted to report it.

In the second slave advertisement it’s not a reward but a captured slave. This slave was arrested for calling himself Caesar and said that he belongs to Colonel Grem of Fort Hudson. In the advisement they said that he is being held in the jail of the Parisher St James. He is 35 years old and lost his right leg and the end of his left foot.

3. When looking at the different documents we came upon an old news article that was reward amount for the slave that escaped and if found the reward on top was the payment for finding them. The wanted news article described the runaway slaves to be between 2035 years of age, both black and male, one was Joe and he had a scar on his face, no beard, well built, and was around 5 feet four inches tall. The article as posted by the state of Louisiana 1835 may 15th. Another article described a man who was jailed for referring himself as Cesar who belong to the colonial green of fort Hudson.  He was 35 years of age and lost his right leg and the end of his left in a big accident that isn’t specified. This article was published may 30th 1835.

5. When reading the “runaway slave profile” Franklin/Schweninger  the story described the runnaway slave to be young men in their teens or twenties and 78% of those were between the ages of 13-29. Rarely was there an older slave runaway but when there was one they were between the ages of 40-50. Most were described as having dark skin, not so well built, and height varied. But when seen in the newspaper article the two men described were between 20-40, well-built and unlike the ones described in the “runaway slave profile” the ones in the news article were injured in different ways. One had a scar on his face, and the other had no leg/ foot.

The reality of connecting the acts of the “slaves” in Beloved to the descriptions given in the advertisements and even just connecting it to the actions taken by the “owners” is startling. The thought that these articles represented another human being is one that i still have problems accepting. For example in the case of Sethe she ran away without taking anything to help disguised herself. If her owner had created an ad for her its description would have been spot on until she gave birth and got the coat from the man and his son to carry her newborn child in. In the first advertisement we have an offered reward for the return or capture of a slave and a proclamation that warns ship captains to not harbor the slave whose name was Joe. Comparing these two things a fictitious account of a slave to that of a real advertisement sheds a light onto an issue that should be remembered and teach a new generation about where they were and how far they have come. In Beloved we learn the story of Sethe who has run away and is on the run for quite some time trying to make it to safety. She goes through many trials and tribulations before making it to Baby Suggs house her mother-in-law. This as it pertains to the ads is basically that she had somewhere to go to and someone that could help her when she got there. The people mentioned in these ads probably had no one and would have been on their own after arriving to safety. In retrospect I think both the story and these ads are part of history that should never be forgotten because it is what helps us to realize that we are an advancing people who are better off due to our experiences. I mean better as a collective whole and not just individually.

The size of the rewards are very small, they are just ads from the newspapers. The ads include from document 6; a $20.00 reward for a runaway slave named Joe, who doesn’t have a beard but has a scar on the face, about 20 years old, who is also 5’4 and well built. In document 5, describes a man named Caesar who is about 35 years old. He lost his right leg and the end of his left foot. During these times which is rounded to about the time of 1835. The slave owners have given good descriptions of their runaways and it seems like they are a value to them, since they want them back. 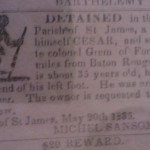 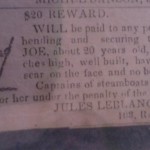 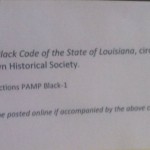 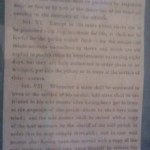