this art work shows one of the moments in Beloved by Toni Morrison that if it would not have happened it would change the story’s outcome dramatically. the moment depicted in the drawing is when Sethe, Denver and Paul D return from a good day at the carnival. Denver had begun to accept Paul D more or less and Paul D had a sense of family together. this could be a start of a new life, he had banished the baby ghost from the house, denver had begun to accept him and he had promise of a steady job. they were walking together as depicted in the drawing and their shadows are holding hands symbolizing a start of a family bond or unity, but that all changed when they saw Beloved on the side of the road near the stump. I chose to do a drawing because i like to do things visually. i am a visual learner and i am a graphic designer. i wanted to visualize and make into a illustration of what i was reading and how i was picturing it. what was going through my mind and how i was visualizing it as i was reading beloved. 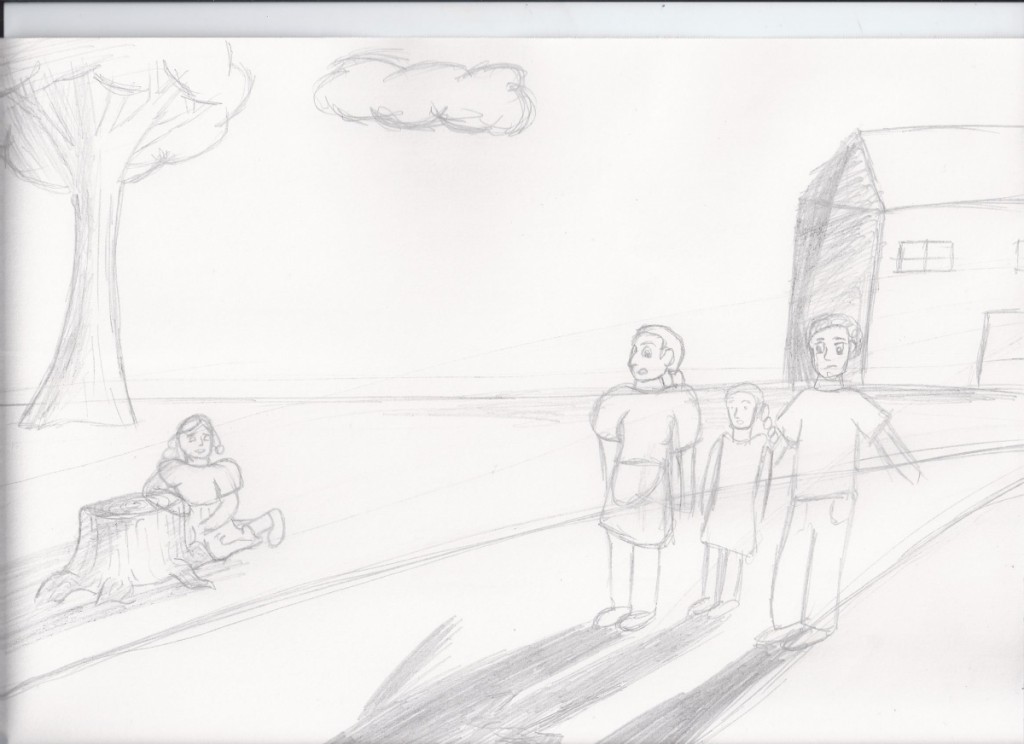 “Paul D made a few acquaintances; spoke to them about what work he might
find. Sethe returned the smiles she got. Denver was swaying with delight. And
on the way home, although leading them now, the shadows of three people still
held hands.
A FULLY DRESSED woman walked out of the water. She barely gained the dry
bank of the stream before she sat down and leaned against a mulberry tree. All
day and all night she sat there, her head resting on the trunk in a position
abandoned enough to crack the brim in her straw hat. Everything hurt but her
lungs most of all.
Sopping wet and breathing shallow she spent those hours trying to
negotiate the weight of her eyelids. The day breeze blew her dress dry; the
night wind wrinkled it. Nobody saw her emerge or came accidentally by. If they
had, chances are they would have hesitated before approaching her. Not because
she was wet, or dozing or had what sounded like asthma, but because amid all
that she was smiling……
“You from around here?” Sethe asked her.
She shook her head no and reached down to take off her shoes.
She pulled her dress up to the knees and rolled down her stockings.
When the hosiery was tucked into the shoes, Sethe saw that her feet were
like her hands, soft and new. She must have hitched a wagon ride, thought
Sethe. Probably one of those West Virginia girls looking for something to beat
a life of tobacco and sorghum. Sethe bent to pick up the shoes.
“What might your name be?” asked Paul D.
“Beloved,” she said, and her voice was so low and rough each one looked
at the other two. They heard the voice first–later the name.
“Beloved. You use a last name, Beloved?” Paul D asked her.
“Last?” She seemed puzzled. Then “No,” and she spelled it for them,
slowly as though the letters were being formed as she spoke them.
Sethe dropped the shoes; Denver sat down and Paul D smiled.
He recognized the careful enunciation of letters by those, like himself,
who could not read but had memorized the letters of their name. He was about to
ask who her people were but thought better of it. A young coloredwoman drifting
was drifting from ruin. He had been in Rochester four years ago and seen five
women arriving with fourteen female children. All their men–brothers, uncles,
fathers, husbands, sons–had been picked off one by one by one. They had a
single piece of paper directing them to a preacher on DeVore Street.
The War had been over four or five years then, but nobody white or black
seemed to know it. Odd clusters and strays of Negroes wandered the back roads
and cowpaths from Schenectady to Jackson.
Dazed but insistent, they searched each other out for word of a cousin,
an aunt, a friend who once said, “Call on me. Anytime you get near Chicago,
just call on me.” Some of them were running from family that could not support
them, some to family; some were running from dead crops, dead kin, life
threats, and took-over land. Boys younger than Buglar and Howard;
configurations and blends of families of women and children, while elsewhere,
solitary, hunted and hunting for, were men, men, men. Forbidden public
transportation, chased by debt and filthy “talking sheets,” they followed
secondary routes, scanned the horizon for signs and counted heavily on each
other. Silent, except for social courtesies, when they met one another they
neither described nor asked about the sorrow that drove them from one place to
another. The whites didn’t bear speaking on. Everybody knew.
So he did not press the young woman with the broken hat about where from
or how come.” (Morrison pg 28) (online version)

i think a significant part in the story where is starts picking up to climax is where they first meet beloved and a few sentences before denver was actually starting to get used to pual d’s presence, but all of that changes when beloved shows up

Visiting the Brooklyn Historical Society was a complete new experience for me because ive never went to a place where real primary sources were archived throughout the years and be able to use in research. its like a time machine and being able to peer into the past and see some of the past and how it was. it has also changed how i can do research and use primary sources to back up my thesis, or support an argument, or enhance a research paper. it has also changed how i view and read the book beloved and any other piece of literature that is in that time period and about slavery such as the “runaway slave profile” by Franklin/Schwninger it gave some examples and descriptions on how the slave owners put slave ads on newspapers and how they described them,whether they were dark skin, mulatto, etc and any other unique features that could identify the person in the ad. Even though they gave descriptions and how they did it and what the ads looked like it does not compare to actually physically seeing and and reading it for yourself what the ads looked like and what they contained. for example the caricature of a slave next to the ad to signify that it was a slave ad. many different things ive learned and experienced. it has changed how i look at primary sources and where to find them. i hope to return to the BHS in the future and take advantage of the primary sources

This picture called “View of North side of 65th st showed me how Brooklyn might have looked like in the story of, “only the dead know Brooklyn” give me a visual perception of the setting of the story where he might of gone to. the picture shows buildings and cars parked infront of the buildings. Perhaps those buildings are still there to this very day if we go visit that place may look virtually unchanged maybe different cars and more modern things but essentially the same thing.

This is the first time i have ever visited or even heard of the Brooklyn historical society. it was an interesting experience, i did not know what to expect. it sounded like a secret organization like the freemasons but it had interesting things and amazing architecture and interior design. it was like going back in time to the 1800’s or early 1900’s. also this is the first time i learn about more places in brooklyn ive never really explored brookyn like that ive never been other places other than coney island and until now downtown brooklyn when i first started in city tech