I found this definition at https://www.merriam-webster.com/dictionary/ardent

i found this word in A hunger artist “and the joy of life streamed with such ardent passion from his throat that for the onlookers it was not easy to stand the shock of it.”

the definition really helps because it shows the warmth of support and joy that he got. He shows how shocked he way and how amazing it was and how he couldn’t stand the shock of it. The word gives it more feel.

I found his definition at https://www.merriam-webster.com/dictionary/apparatus

i found this word in the Hunge Artist “ A large circus with its enormous traffic in replacing and recruiting men, animals, and apparatus can always find a use for people at any time, even for a hunger artist, provided of course that he does not ask too much, and in this particular case anyhow it was not only the artist who was taken on but his famous and long- known name as well”

vigil – (noun) the act of keeping awake at times when sleep is customary; also : a period of wakefulness

i found this definition at https://www.merriam-webster.com/dictionary/vigil

I found this word in the Text the hunger artist.

Of course there were people who argued that this breakfast was an unfair attempt to bribe the watchers, but that was going rather too far, and when they were invited to take on a night’s vigil without a breakfast, merely for the sake of the cause, they made themselves scarce, although they stuck stubbornly to their suspicions.“

Formality, noun: an established form or procedure that is required or conventional.

We first read this word in The Hunger Artist by Franz Kafka. Its used in reference to an unnecessary action that is performed at each of the artists productions, which in this case was a volunteer making sure that the artist was not sneaking food.

“Apart from the changing groups of spectators there were also constant observers chosen by the public—strangely enough they were usually butchers—who, always three at a time, were given the task of observing the hunger artist day and night, so that he didn’t get something to eat in some secret manner. It was, however, merely a formality, introduced to reassure the masses, for those who understood knew well enough that during the period of fasting the hunger artist would never, under any circumstances, have eaten the slightest thing, not even if compelled by force. The honour of his art forbade it.”

Morsel – a small piece of food

I have encounter this word, while reading the “Hunger Artist” on page 1, on the second paragraph, it said “This was nothing but a formality, instituted to reassure the masses, for the initiates knew well enough that during his fast the artist would never in any circumstances, not even under forcible compulsion, swallow the smallest morsel of food; the honor of his profession forbade it. Not every watcher, of course, was capable of understanding this, there were often groups of night watchers who were very lax in carrying out their duties and deliberately hudled together in a retired corner to play cards with great absorption, obviously intending to give the hunger artist the chance of a little refreshment, which they supposed he could draw from some private hoard.” After understanding the definition of this word, it means to eat a small quantity of food. In this picture she eating a small amount of food. 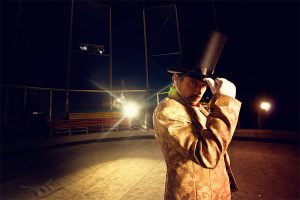 – the promoter, manager, or conductor of an opera or concert company.

I found this definition on https://www.merriam-webster.com/dictionary/impresario

I found this word in The Hunger artist by Franz Kafka

“ The impresario came forward without a word—the music made talking impossible—raised his arms over the hunger artist, as if inviting heaven to look upon its work here on the straw, this unfortunate martyr (something the hunger artist certainly was, only in a completely different sense), grabbed the hunger artist around his thin waist, in the process wanting with his exaggerated caution to make people believe that here he had to deal with something fragile, and handed him over—not without secretly shaking him a little, so that the hunger artist’s legs and upper body swung back and forth uncontrollably—to the women, who had in the meantime turned as pale as death. ”

i has no idea was impresario meant so reading this I didn’t totally understand who this man was and why exactly he was doing what he was but now that I know the definition I get why he was there and why he did was he did. This word is a great vocabulary substitute because it’s not commonly used.

No, it is not possible to fast for that long and expect to be alive for all of it especially with out water. Any real person cannot survive without food for 3 weeks, so instead what is used is a suspension of belief. What a suspension of belief is when a writer introduces something that can be a little believable and makes it interesting, then it would make the readers forget about reality and just focus on the story. In the version of Cinderella that I read which was “The Little Red Fish And the Golden Clog”. There where many occasions that wasn’t believable at all like a fish that can talk and toxics that can make a person beautiful, but what made it ok was the emotions of Cinderella and how she was being treated a version of suspension of belief. A another example, is a super hero show called the Flash the main character was hit by lighting next to random chemicals. In real life a person would die by the chemicals and the lighting, but it would be entertaining to see a human get super speed and it kind of makes sense. As the watcher you do not know what chemicals that are used and with the way how science is now it is possible. The fact that the chemicals could of fuse with the lighting and in return it gave him powers could be excused.

A Hunger Artist by Franz Kafka is written from a Third Person (Omniscient) point a view because we are able to distinguish how more than one character feels or thinks. For example, speaking for the hunger artist, “He had looked forward with delight to the crowd pouring around him, until he became convinced only too quickly-and even the most stubborn, almost deliberate self-deception could not hold out against the experience-that, judging by their intentions, most of these people were, time and again without exception, only visiting the menagerie”

When one of the girls had helped carry the Hunger Artist “lay against one of the women, who appealed for help with flustered breath, for she had not imagined her post of honor would be like this”

This story is Third Person point of view because the main character isn’t telling his own story. There are no use of the words “I, I’m, me, my, etc.”. Someone else is telling his story. These are all examples of Omniscient Third Person point of view because they provide insight on more than one character; their intentions, thoughts, and reactions. When reading this story I was very confused as to why a guy who starves himself was considered an art. Regardless, I found it amusing how it pained the artist to be around people who misinterpreted his art, but how that very scrutiny is what kept his career going. He thrived off the attention of others. He saddened as time passed stuck in the same cycle of being misunderstood and the need of acknowledgment.

As we have now addressed all of the readings in this section of our syllabus, we can finish any remaining conversations and begin our preparation for the midterm exam. Posts due on Tuesday at 12:00pm and comments for Wednesday at 10am can reflect on the materials we have covered. Here are some thoughts for these posts:

For Wednesday’s class, we’ll spend a little time doing a peer review for Project #1. I have asked everyone to bring a draft (in whatever shape it’s in) of Part 1, and an outline (including a thesis statement) of Part 2. The goal will be to share ideas with others writing about the same story to get feedback about how to structure the comparison.

We’ll also have a lively review for the midterm exam, where we will brainstorm questions that will be on the midterm. Come prepared: bring your texts, re-read them, mark them up more, and be ready to think about connections and themes.

Compulsion (Noun) ->>>> the state of being forced to do something.

I found this word from “A Hunger Artist” by Franz Kafka

This was nothing but a formality, instigated to reassure the masses, for the initiates knew well enough that during his fast the artist would never in any circumstances, not even under forcible compulsion, swallow the smallest morsel of food;

This word was used to describe that the artist would not (even if forced to do so) take a small piece of food into his mouth. I was able to understand the meaning of this quote even before looking up the word, by using the key phrases around the word like (forcible) , but still this is one of the few times I encountered this word.