It’s almost over. My last project will be creating an inviting design for families with children with special needs.

It’s really been a great ride. I’m about to hit my 100 hours and I’m so excited but it’s bittersweet. These people have been nothing other than nice to me and I really appreciate that they’ve taken the time to mentor me all the while giving me design freedom.

I’ve learned so many things about advertisement and opinions. Some people like a certain look while others don’t. I’ve felt what it feels like to work on your own in a real office while also working as a team and it’s been amazing. I hope what I’ve learned being in this internship will help me in the near future and career path.

Last time I spoke about the General Flier I was working on.

So I came up with these two designs. 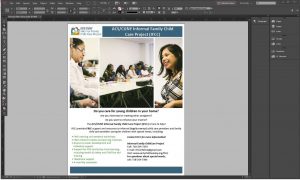 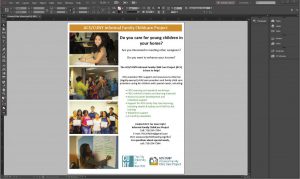 Angelica liked the first two, while Geomara and Andrea like the first one more, they said it was so good that they only wanted me to update the text!

I’m finished with the November newsletter and the outcome was really nice. I liked the sleek, clean look that I came out with and so has my boss. The next project IFCC has wanted me to do is create a general flier that represents the company. They wanted me to use “business-like” colors all the while be welcoming and friendly.

Today, my boss also asked me to go to the print room and pick up some prints they sent to the printer. Turns out it was the fliers I made!!! I can’t believe I’ve actually gotten my work printed. And to top it all off it’s sent out to the mailing list of the company, which is about 995!

It’s been the usual lately. I get to the internship at 9 on both days and I get out by 2pm. I forgot to mention in the previous posts that I have my own desk. There are days when it’s fairly quiet and then there are days that we talk about our favorite shows(my boss loves Game of Thrones and the Walking Dead). One of the other women who works in my office is Margaret. She’s in charge of the Special Needs section of the organization. She basically organizes classes and registers people who are interested in being in those classes. Lately, she said that her section is always being pushed when she needs something advertised and has to use the basic template. This is the Flier I created advertising their upcoming events; 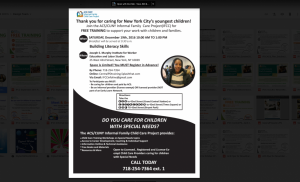 But she is really excited that I’m an in-house designer because this way they don’t have to wait on the Freelancer they usually hire.(I don’t know is this is a good thing or bad?)

I had to miss a day because it was New York Comic Con, so this week I’m making up the hours by just sitting on my desk and catching up with my supervisor on what projects I’ll be working on for the month of November. She explains to me that I’ll be in charge of redesigning a whole new newsletter for the Fall Series. And that they really want to incorporate playfulness and childplay. She usually gives me the final draft of the articles and it’s my job to design everything. My bosses are pretty straight forward, they don’t mind what I do as long as I use their own stock photos(which they take when they hold special events or classes) and that everything is aligned. 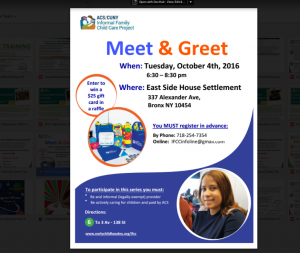 I also talked to Andrea who is one of my bosses and I realized that both of my bosses(Geomara and Andrea) are really into the well being of the human body. During this week I had a really bad cold and they offered hot tea, napkins and a lot of well wishes.

IFCC is so used to creating their fliers, brochures, newsletters with Adobe Acrobat that I couldn’t take it. It doesn’t have the same flexibility as Photoshop, Illustrator, or InDesign. So I took the reins into my own hands and I’ve been using the regular Adobe programs so far. My time management had really increased as I’ve been working here. The programs I’m used to have given the work I’ve created a touch of my own. And I’m so excited about that!  I’ve been getting projects done more quickly. The office life is pretty quiet. We usually all get plugged into our music while we work. I usually ask for feedback as soon as I’m done with an idea and we have email chats about what works and what doesn’t. Here is a flier I did for their event. 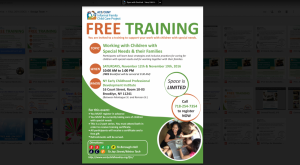 This week the project coordinator wasn’t there and I had finished all of my work for the week so I decided to update my resume and give it a whole new redesign. It used to be two pages but now it’s one. And honestly, I think I’ll jazz up my portfolio while I work on it too.

The really nice ladies offered me coffee today. Like they actually shared some k-cups and asked if I needed anything. Then told me about some really good lunch places around Court Street.

This week, Angelica wanted me to redesign their newsletter for the month of September. The one they had used for the summer was an okay layout, but it had all this static going on the page. She said it was okay if I play around with the typography and redesigned the layouts of the pages. I decided to use some colors that would pop out to the readers.

It’s my first day at internship. There’s four other women in the office. Their names are Angelica(who hired me) Geomara, Andrea, and Margaret. I work closely with Angelica because she is the one in charge of the non-profit organization.

They’ve been super nice so far. They didn’t have any upcoming projects this week, so Geomara helped me set up an email account under the company’s server, gave me a tour of the building(oh and I checked!! There really is no number 13th floor in it!) She introduced me to this kind old lady who was in charge of giving out building keys and IDs. I know that IFCC also shares the building with a bunch of lawyers.

They also said I could bring my lunch into the office or if I felt more comfortable eating in the lounge on the 4th floor, that would be find too.

Honestly, I’ve never applied to so many places in my life at the same time. At one point I became so scared that I wasn’t going to get a call back that I went and looked at every internship that was in my range for travel and sent them my resume and portfolio.

I had an offer from a very kind woman who worked from home at her own agency but it was way too far. Her place was almost near Coney Island!!!

I had an interview with ClickDaily but they didn’t want me so.. I moved onto the next and it went pretty well. At first I was really nervous that when I went to the building where the interview was being held at, I told the guard I was having an interview. And he smiled and wished me good luck. As I went inside the elevator I saw the buttons and it said the building had 39 floors!!

Honestly I’ve never been that high in my life except when on an airplane.

The interview was MUCH longer than ClickDaily’s. The interviewer seemed really charismatic and actually cared about my portfolio.

The woman who interviewed me was named Angelica and she said to email her with a reference and Professor Nicolau’s email. I was so excited that I almost dropped my phone when I got the email the next day that I had gotten the job!!

Today was the first day of my internship class and it went pretty well. Professor Nicolau was really thorough when it came to how much you need an internship to pass the course. And I completely understand. I’m just pretty scared because I’ve barely worked three different jobs since I was 14 and wasn’t used to being in a new place. At all. Today I will work on my resume and reorganize my portfolio because God only knows I really want to get an internship.

I’ve looked at all the contacts Professor Nicolau has given us and I’m pretty excited and anxious at the same time. I hope I get one.