A group of ~25 students from several departments and organizations within NYCCT / CUNY considered that a visit to a place where they could see technicians, engineers and scientists to work would enlarge their vision in their field and also inspire them to pursue a higher degree in engineering, physics and applied sciences. So their professors thought about it and concluded that one of the largest and most advanced science center to visit in New York state is the Brookhaven National Laboratories(BNL) 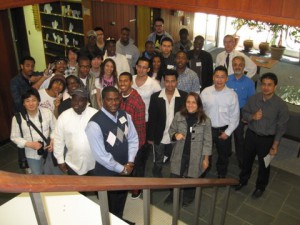 So they set out on this venture early morning on April 30, 2010.  The first lab visited was the Center for Functional Nanomaterials(CFN). CFN at Brookhaven National Laboratory provides state-of-the-art capabilities for the fabrication and study of nanoscalematerials, with an emphasis on atomic-level tailoring to achieve desired properties and functions. 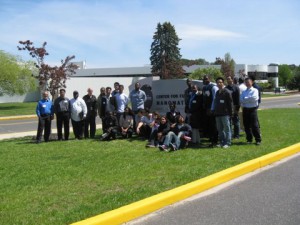 The CFN is a science-based user facility, simultaneously developing strong scientific programs while offering broad access to its capabilities and collaboration through an active user program. For high-energy physicists performing experiments at an electron accelerator, synchrotron radiation is a nuisance which causes a loss of particle energy. But condensed-matter physicists realized that this was exactly what was needed to investigate electrons surrounding the atomic nucleus and the position of atoms in molecules. So, in the early days, the two branches of physics worked together in so-called “parasitic” operation, where synchrotron light illuminated the condensed-matter physicists’ experiments while particle physicists used the electron beam 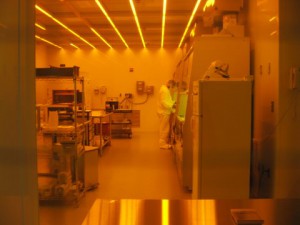 Inside a Nanofunctional Material Laboratory

The overarching scientific theme of the CFN is the development and understanding of nanoscalematerials that address the Nations’ challenges in energy security, consistent with the Department of Energy mission.

Following this lab we went to the National Synchotron Light Source (NSLS). In 1945, the synchrotron was proposed as the latest accelerator for high-energy physics, designed to push particles, in this case electrons, to higher energies than could a cyclotron, the particle accelerator of the day. An accelerator takes stationary charged particles, such as electrons, and drives them to velocities near the speed of light. In being forced by magnets to travel around a circular storage ring, charged particles tangentially emit electromagnetic radiation and, consequently, lose energy. This energy is emitted in the form of light and is known as synchrotron radiation. 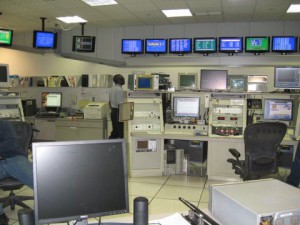 The Control Center in NSLS Lab

The General Electric (GE) Laboratory in Schenectady built the world’s second synchrotron, and it was with this machine in 1947 that synchrotron radiation was first observed. Radiation by orbiting electrons in synchrotrons was predicted by, among others, John Blewett, then a physicist for GE who went on to become one of Brookhaven’s most influential accelerator physicists, working on both the Cosmotron and the Alternating Gradient Synchrotron.

The next stop was at the New York Blue Super Computer 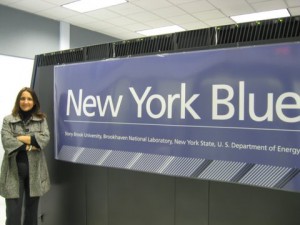 New York Blue/L is an 18 rack IBM Blue Gene/L massively parallel supercomputer located at Brookhaven National Laboratory (BNL) in Upton, Long Island, New York. It is the centerpiece of the New York Center for Computational Sciences (NYCCS), a cooperative effort between BNL and Stony Brook University that will also involve universities throughout the state of New York. 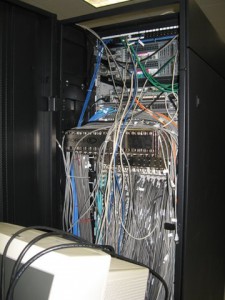 y (a total of 36864 processors and 18.4 TB of memory). The racks are arranged as six rows of three racks each.In addition to New York Blue/L, there is New York Blue/P which consists of two racks of the Blue Gene/P series. Each BG/P rack contains 1024 850 MHz quad-processor nodes with each node having 2GB of memory.

“The main focus of our visit consisted of the National Synchrotron Light source and the New York Blue supercomputer. I was stunned that when one of the physicists was describing the NSLS he mentioned the right-hand rule method to determine the direction of electrons when it comes to velocity, magnetic field and force. When I learned this method in class I thought it was just a dumbed down method to help students. I was also surprised at the fact that no matter how advanced and scientific something is, it can still be covered in aluminum foil like a baked potato to keep the temperature like the NSLS…

I learned a lot from our field trip and was delighted when Professor Vladutescu asked the troubleshooting engineer technicians their educational background and most had associates in electrical engineering. Working at BNL is definitely something to shoot for and I look forward to applying for their summer internship program. BNL is like a Disney world for the mind.”

“…..Another thing impressed me in this visit was the education background of the technicians. When we were in the control center of the Synchrotron Light source, we learned that four of the five technicians working there have the associate degrees in engineering and another one has the bachelor’s degree, but at the same time we also learned that they have much related experience before working in this laboratory. This showed us that both the education and experience contribute the future of our career after we graduate. I hope that on some day I can have a professional job like them.”

For more on this field trip check here