Hello, today is the day that I present my culmination project, Rising Threat to faculty. I’m a little nervous but I’ve been practicing as well as troubleshooting the game a few days.

Here are a few things that I added since the October update:

Overall I’m happy with what I have currently, but I see a few things that I would like to improve as well as things I forgot to add such as control instructions (how did I forget). I will most likely continue working on this after I present today.

With only 2 weeks away from presentation, I’m happy to say that my project should be completed by next week which includes the full VR experience for Rising Threat.

Despite the VRTK conundrum, SteamVR worked pretty well and the project now has object interactivity.

Here’s a quick list of things added since the last update:

There are some things I would like to add such as Text within the world reminding the player which year they are in, Credits, small patches of vegetation, and improving the audio experience.

Here are some images:

After finally finishing the house model through Blender, the next step was to import the fbx file to Unity. Which was very easy and the model looked nice in Unity.

The next step was to add materials to the model as well as assets such as furniture.

Here are some images after the adding materials and assets. I deactivated the ceiling just to make it easier to take pictures from the top. 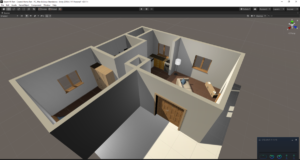 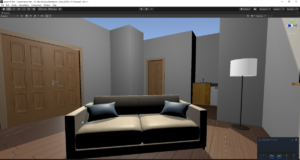 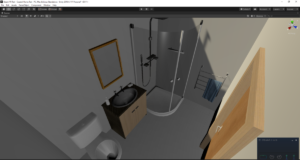 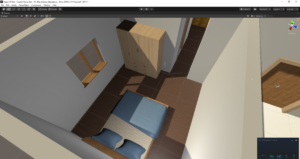 Here’s the assets that I used for the furniture as well as some materials from the Unity Asset Store.

The next step was to start implementing VR elements to the scene which was working well. However after the October 8th , there was an update to the Oculus Integration which messed up my progress. (Many compiler errors after the update). I tried to fix it and noticed the problem resided on the Oculus Integration, VRTK worked fine, however adding the Oculus integration gave me lots of errors sadly.

With VR being in part of my project, I looked for alternatives and decided on SteamVR. I remember being introduced to me in another class not didn’t get to use it. So far so good, there’s many differences between VRTK and SteamVR but they also share the same idea.

i tried uploading a small video but Openlab didn’t let me, here’s a link to it through Google Drive instead.

As for my next steps,

I’ll try to figure the VR interactions, I know that there’s an example given by SteamVR which I’ll have to experiment with.

Sounds will need to be implemented which I have some already collected, just need to create audio game objects in the scene.

Finally, creating the world outside the house such as the coastline and the horizon.

Next updates will be more common starting next week.

Have a good one

This is one of the many updates I’ll be posting regarding my culmination project, Rising Threat.

One part of my project is to create a model of a coastal home. Using  real coastal house plan as reference to get an idea on the scale, I will use blender to create the model.

Blender has a very cool add0on for free named, Archipack. This add-on allows me to create walls, doors, and windows with ease.

The picture below shows me using the house plan as reference to create walls. 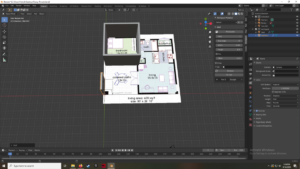 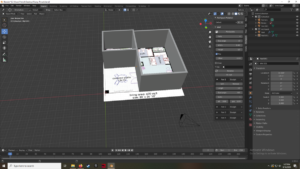 Here are some tutorials that I watched to learn about Archipack which helped me a lot.

VRTK is a set of tools to ease the production of VR games. Some of tools that they provide are assets, VR simulator for people without a headset, their own scripts for different purposes, and much more.

3D beginner: Complete Project is a beginner tutorial to create a stealth game. All assets are provided  for free such as environment, animations, characters, and scripts.

I’ll be combining these tools using Unity and creating a small puzzle game in which the player tries to find a key within the level to open a door. Using VRTK, I’ll be able to make objects interactable and have certain behaviors when placed in a specific area. Another goal that I have is to create triggers that the player will activate by passing through them which will cause for different scary sounds to occur.

As for my experience with Unity and VRTK, I’ve previously used them for another class and I thought it would be nice to continue to learn and rediscover things with VRTK. Furthermore, I got an Oculus Rift which made me want to use VRTK more and I’ll probably create something in my culmination project next semester.

One thing that I will need to keep in mind is documenting my work. However, I have some screenshots of my first prototype of the project. The idea was to try making the project first before recording my process.

Here are some below: 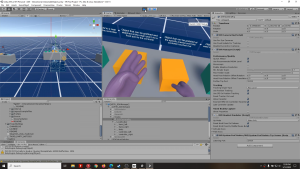 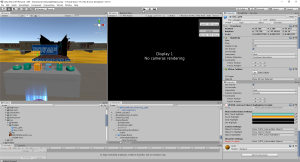 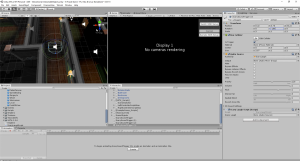 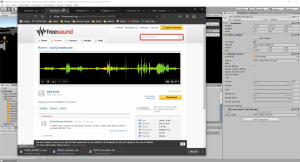 I used freesound.org to get sound effects for my triggers. I highly suggest this website: https://freesound.org/

For the final project, I was also tasked on creating a 10-20 minute tutorial. My video ended up being quite long as I covered from collecting the resources such as 3D beginner complete assets, VRTK, and showing to implement both to a new Unity project. As well as using the level asset provided and creating sound triggers throughout the level. Finally, I went over making a key interactable using VRTK scripts and making a grab point for the key. This is all in the first video. The second video will cover creating a snapzone that the key will interact with. It will also show me cleaning up the scene and adding colliders to the level’s walls and objects so that the player can’t walk pass them.

Last mention, sorry for the audio levels as well as my voice, was feeling under the weather because of allergy’s.

Part 1 of my tutorial: https://www.youtube.com/watch?v=72f2yu70OPk&feature=youtu.be

Part 2 of my tutorial: Still editing

Here is one of the objects that’ll try to use photos and convert it to a 3D model using Agisoft Metashape. 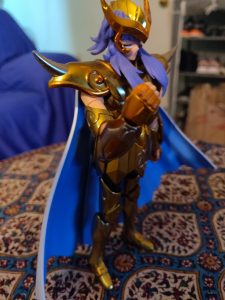 After taking 41 images and adding them to Metashape. I started to build the dense cloud, this is the result… 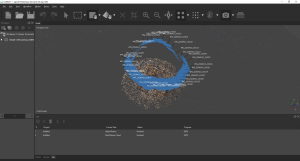 It didn’t work. I believe it could have been for the reflections on the object. I tried again with new pictures, however it didn’t work.

As for my second object, I used my dog’s toy. 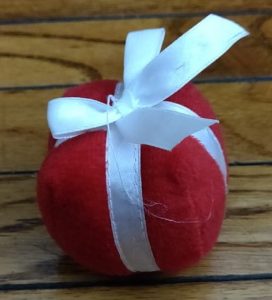 Did the same steps as before and got this… 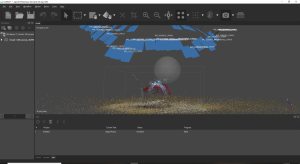 It didn’t work once again.

I’ll try other locations in my apartment to take photos, I’ll keep this post updated.

My first version/attempt on creating my vr chat room didn’t go well as I didn’t know what to create.

Here’s my second attempt on creating a VR chat room. It stills needs work such as scaling on some of the objects, materials need to added to the furniture, and an outside area that can’t be reached to simulate not being able to go outside.

The idea is the mix of a jail cell and my own home as we are currently on lockdown due to Covid-19.

Things that’ll be done by next week:

I ended up using Tafi avatar creator. It was very simple to use, it’s very similar to character creators you see on other games. However, your customization options are very limited, most clothing options require real life money to use.

I tried using Maximo using several humanoid models that were in the T-pose, but I always got an error form Maximo. I’ll try to find more 3d models and try to get Maximo to work. 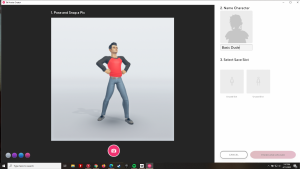 Hello, this is my personal room/world that I made using Probuilder.

Overall, I liked using probuilder when it came to making arches which I used to make small tunnels connecting my living room and small park area. It was a bit tricky my first time using it, however the more I made walls and floors, the more I understood it. As for the furniture and nature assets, I used the unity asset store and decorated the place.

I may have gone overboard as I needed to make one room, but I enjoyed this assignment.

As I mentioned in the title this is still a work in progress:

Adding materials to the tunnels, and park area.

Here are some screenshots:

Finished my vr chat room. I used models from sketchfab to decorate my room, unity’s asset store barely had nay models that caught my interest. I used sketchfab and unity plugin to ease the progress of getting models.

Sketchfab for unity 1.1.1 plugin helped me a lot. (Highly recommend)

Here are some screenshots below: 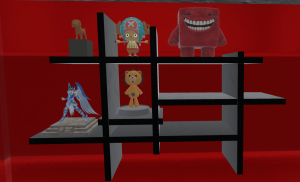 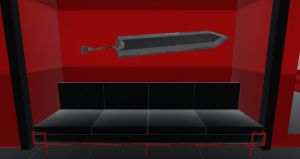 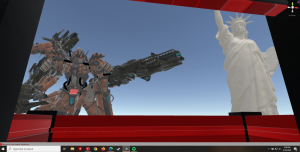 So far I’m enjoying this assignment. The tutorial’s commentator explains things very well. I’ve played around with the materials and changed their colors.

Here’s my progress so far, not done yet: