Skip to the content
ENG3407 Gothic Literature and Culture, Fall 2020

For the first picture (which I did not take because I was not able to go) I chose Grace Church 802 Broadway New York, New York. To me this was gothic because of the pointed features and glass windows. It is layered with those features (especially the points) and the color is gloomy. In addition to the pointed arches and ornates there’s also curved and arched windows and other designs (lanset). The highest ornate also has a design that looks like a net which reminds me of feeling trapped.
The second picture for the architectural uncanny I chose this under part of a bridge. Although it is very beautiful and accented with the growing vines and branches on the side, being under (or even on) a bridge is sort of terrifying for me personally. Even though I know these bridges are built to last, the idea of something that great and big collapsing is terrifying. It is unwelcoming and cold to me to be under a bridge of ny size but especially something that mighty.

The Reims Cathedral represents the architectural uncanny because it looks very dark and quite marvelous at the same time. It is a church and it has a lot of different spires. There didn’t need to be this many spires or this many decorations, but the circular windows make it look very interesting and beautiful as well.

The second picture is my church that’s right by my where I live. I consider this gothic because it looks more like a castle especially in the daytime. It has the tainted windows and the stained windows that seem to glow when the sun hits it. It is an old church and has the castle or rook pieces sitting on the top.

I captured both of these photographs exploring the city a while ago. The first photograph is the exterior and the second is the ceiling inside the St. Patrick’s Cathedral located on 5th Ave. I find that the cathedral is an example of Gothic architecture because of its gray stone color, pointed finials, a sort of pointy ceiling, glass tinted and pointy windows.

I’ve chosen St. Patrick’s Cathedral because it always grabbed my attention every time I go around that area. The structure of the building in general is described as gothic because of its different aspects, which generally include its shape and structure. Many pointy and sharp edges mostly pointing above.

I’ve chosen the Queensboro Bridge as my second image because of the old fashioned structure with pointy edges and color tone. The beams and overall design of this bridge give a sense of gothic and not modern.

In the first image, it is a picture of a church near me and I consider this Gothic architect. Some reasons why I think this is Gothic is because the main colors of this building are green and brown which gives it a dark vibe and the church has grey bricks surrounding it, the roofs have pointed arches and are in the shape of triangles. The windows are stained-glass windows. In the second picture, it is my sister’s backyard and I consider this Gothic because it is dark and a little scary. There are two garages that both go up in triangles. There is a big tree in the middle of both with no leaves on it.

These are building which can be seen in my neighborhood the first is the armory in kingsbridge heights which I noticed had some gothic architectural features like its pointed tip and growing tree leaves on the building all give a gothic impression and leave you wondering whats in but at the same time not wanting to go your self,Also it had a few lancet shaped building to add to it. The second building is from Lehman college which is near kingsbridge and it has the the use o tracery and different carving around it which gothic architecture uses alot and pointed spikes at the top though few

For the Manhattan Bridge, I pick this specifically because some parts of the Structure does show Vidler’s Uncanny of architecture. At the side of the Manhattan Bridge, it’s gothic because it has pointy arches and that does show an example of a gothic architecture. As for the last two pictures but different angles of the Trinity church that is located at 89 Broadway, New York, there are many characteristic that shows that this church is a gothic architecture. For example, there are a lot of curving windows, pointy arches, and carvings. There are also tracery and spiral ornate which is also part of a gothic characteristic of an architecture. The gothic church was build in 1839–1846 by Richard Upjohn and it is a gothic revival.

The second picture is of a church in my neighborhood named Sacred Heart. I find this building Gothic because of its constructions, it has pointed arches and columns that emphasize verticality and the gray stone color it’s built of. It also has arched ceilings and stained glass windows in the lancet shape. The first picture is a bridge in my neighborhood that connects Washington Heights to HighBridge. It is gothic because of its grey color stone. 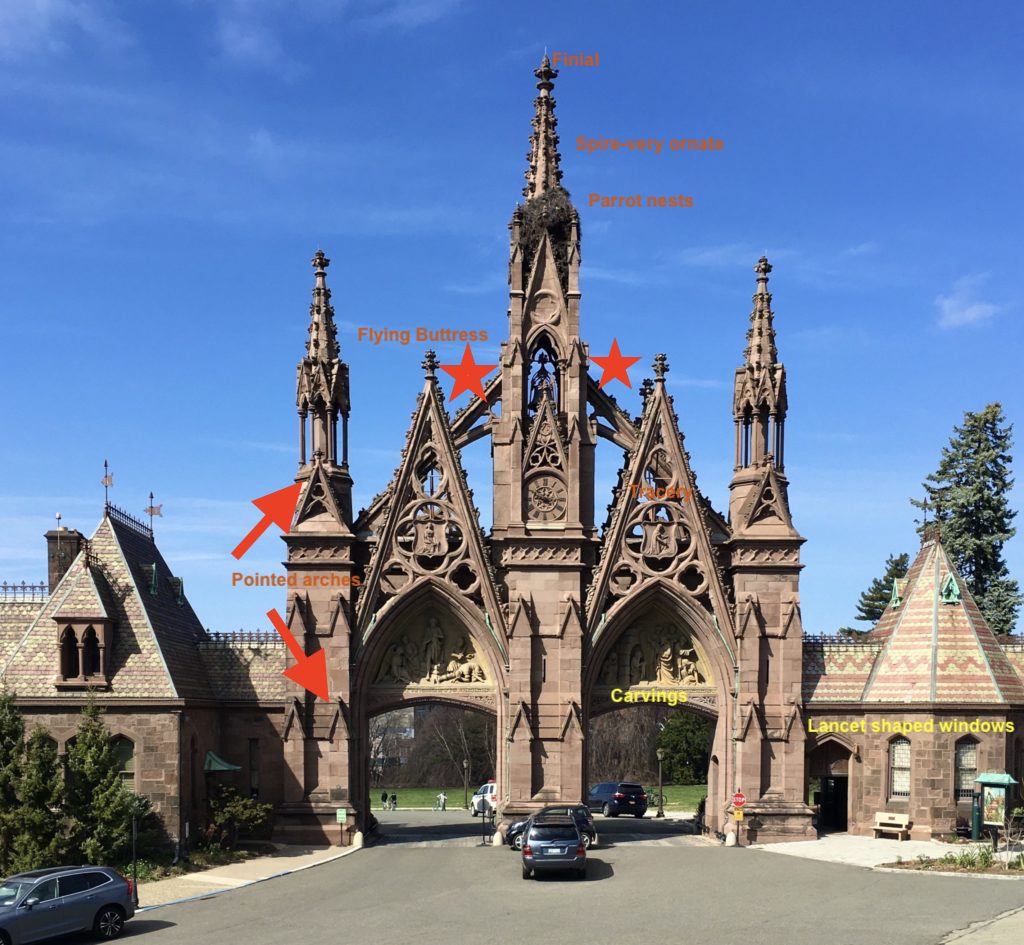 At the corner of 5th Avenue and 25th Street in the Greenwood neighborhood (or extreme south Park Slope or extreme north Sunset Park) is the monumental gate to Green-Wood Cemetery. Designed by Richard Upjohn, the style of the gate (and guard offices) is called Gothic Revival—as opposed to medieval gothic style. Work was begun in 1861 and completed in 1865. The reason it took so long was due to the time-consuming work of carving the brownstone from Belleville, New Jersey. Limestone from Nova Scotia, Canada, was used in the panels that represent the scenes of death and resurrection from New Testament stories including Lazarus, the Widow’s Son, and Jesus’s Resurrection. John M. Moffitt was the sculpture of these panels. The gate was designated as a New York City Landmark in 1966. An interesting side-note is that the gate is home to a large colony of Monk Parrots that escaped from the Kennedy airport in the 1960s. Their call is very loud and is described as “raucous and harsh.”

I’ve highlighted some of the gothic features of this gate.

This class is Online and Synchronous