This week we completed a lot of steps of the Hell Bunny hardware part of the project. First, I soldered the entire circuit together, creating the most reliable connection and eliminating the breadboard. I divided this task into the following steps:

1. Solder the LEDs together adding a 1K resistor and long (labeled)  jumper wires;

2. Install the LEDs inside the Bunny’s head and secure them sewing two small pieces of foam;

3. Test the LEDs when installed by connecting jumpers to the appropriate pins on the Wave Shield and running the sketch;

4. Solder long jumper wires to the PIR sensor, label them and test them after installation;

6. Solder all ground wires together (LEDs, 2 servos and PIR sensor grounds) and test the system;

7. Solder all voltage wires together (PIR sensor and 2 servos voltages) and test the system;

8. Solder all remaining wires to the Wave Shield according to the code and test the system.

I started with the LEDs and soldered them as follows: 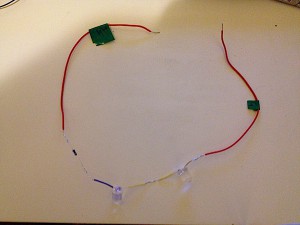 The connection seemed to be good, and I decided to put them inside the Bunny’s head. I cut two small holes in the eyes, inserted the LEDs and here the nightmare began. When inserting the LEDs, one wire came out, so I had to solder it again. During the next installation attempt another wire came out. And then again, and again, and again… I ended up soldering these wires together about 20 times, and finally managed to install them without breaking the connection.

Then I moved to soldering jumpers to the PIR. It was hard (because unfortunately I don’t have the third arm), but not so hard as LEDs. After that I moved to servos, and here the nightmare number 2 began. I spent about 7 or 8 hours trying different approaches to secure the servos inside the Bunny’s soft head. I ended up using a piece of foam with two holes for two servos and a lot of sewing involved.

Then I soldered all grounds together, making one common ground wire, and after that did the same for all the voltages. Here is the video showing the Bunny’s test before the last step. In this video wires are inserted (but not soldered) into the proper pins on the Wave Shield.

As we can see, the entire system, including both servo motors, is working. I moved to the last step and soldered all the wires to the Wave Shield as follows: Common Ground – to the GND pin; common Voltage – to the 5V pin; PIR signal – to pin 6; 1st servo – to pin 7; 2nd servo – to pin 9, LEDs – to the Analog pin 4 (=digital 18). Then I tested the Bunny again… and the system wasn’t working properly. First of all, the audio was playing in a loop, without the sensor involved. Also, only one servo was working, and another servo was only making strange noises, but not rotating. These conditions lasted for about 5 minutes, then the ‘noisy’ servo produced a very loud sound (it sounded like motor acceleration) and then kind of locked itself down. It was a very bad sign, and after I checked it out, it wasn’t working anymore. But surprisingly, everything else was now working properly: PIR was triggering motion and activating the system. I was so exhausted and afraid to lose everything,  that decided not to delve into the Bunny’s head again, at least for now.

Tuesday I brought the Bunny in class, and Jorge and Frank developed a system to put all guts inside the Bunny in a nice way, eliminating any short circuit possibility and providing an easy access to the battery and to the Wave Shield. 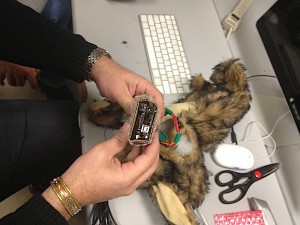 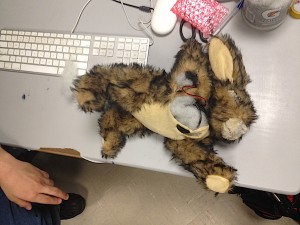 So, as of this writing, we have one bad news and one good news. The bad news is that we lost one servo, the good news is that, besides this, we’re almost done. We only need to sew some velcro tape and some cloth to the Bunny and to gather documentation for the final presentation.

Here is a small ‘promo video’ for our bunny made during Thursday class: