Another day has passed in the city of lights. Today, the class visited the Montparnasse Tower, which is the only skyscraper within Paris’s perimeter. From the Adagio Aparthotel, the duration of the trip was only 15 minutes. We took the Metro 13 to Montparnasse and when we exited the station, the tower was less than a five minute walk. The staff at the Montparnasse Tower were attentive, efficient and informative! Our tour guide was the director of marketing and sales. After a brief introduction of the tower, we were able to visit the upper observatory and take pictures. The Montparnasse Tower has the best view of Paris, and overlooks 50-80 landmarks! The view was absolutely stunning; buildings and landmarks reached back as far as the eye could see. The skyscraper has an impressive 58 floors and an upper observatory that has a 360 degree panoramic view of Paris. 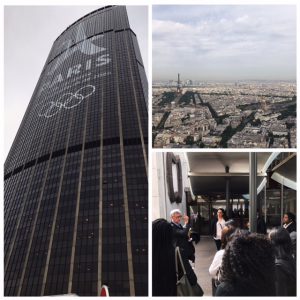 Some photos from Montparnasse Tower; views from the observatory and listening to the tour guide 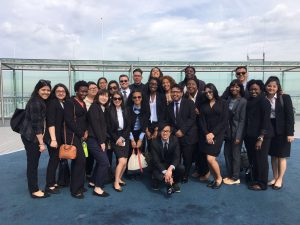 After taking photos and spotting landmarks that I had already gone to, I went to Black Pinky which is a Pan Asian restaurant located at 30 Rue De La Gaite. The food was mouth watering and filling; I ordered the Bo Kho which is a Southeastern Asian cuisine that includes vegetables and beef that has been simmered for four hours. The beef was extremely tender and the flavors of the broth complimented the dish well. The meal left me feeling satisfied and gluttonous for more. To my dismay, we had eaten so well that we did not realize that time had passed so quick! Maybe this is the reason why Parisians are given up to two hours for lunch. We rushed to our second stop, which was a walking tour led by Aliyyaa, Nagisa, and Angela at Jardin des Plantes. 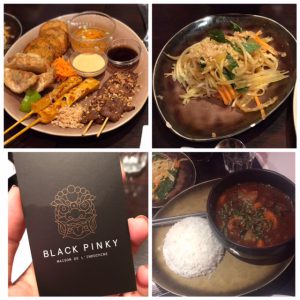 The Jardin des Plantes is located at the last stop of the Metro 10, Gare d’Austerlitz. Aliyyaa presented first by explaining the transportation to get to the park, Nagisa described the park and the surrounding places within the park, and Angela presented the things to do around the park. The finishing touches of the presentation was Aliyyaa showing the class the various flowers in the garden that had strong scents. There were roses that smelled sweet and some others that smelled like baby powder. Overall, the presentation was well researched and I felt that they did an exceptional job! Bon travail! 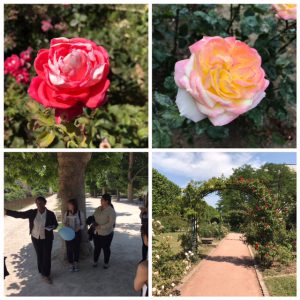 Top left and right: Flowers in the garden
Bottom left: The group presenting.
Bottom right: Archway leading to the garden

The last stop of the day was Hotel Le Boutet. To get to the hotel, we had to take the metro 8 to Faidherbe-Chaligny. Hotel Le Boutet is the first five star boutique hotel on the Eastern side of Paris. They offer a swimming pool, fitness center, and breakfast for an additional charge. What was impressive about this hotel tour was the fact that all the rooms that we visited did not look alike. Two of the suites were designed by graduated students at the local Architecture school, which I felt was an impeccable way to include the community with hospitality. The design of the rooms were intimate, delicate, and unique. Overall, I felt that the hotel’s target demographics was towards business guests and couples. But it would not be suitable for children since most of the rooms were very small. 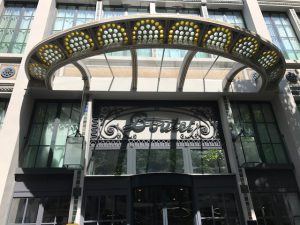 The entrance to Hotel Le Boutet

From the Montparnasse Tower to Hotel Le Boutet, today was filled with adventures and laughter. By the time the clock made its’ way to 5:00pm, we had dragged our tired feet to our rooms for rest and relaxation. Although we may be tired, our excitement and anxiousness for the impending day is apparent. For now, Au revoir!