I took this picture because this bridge pictured here is of the formerly known as the Triborough Bridge on Astoria Blvd. The bridge was rightfully named so because it connects the boroughs of Queens, Manhattan and the Bronx. The bridge has been opened since 1936. 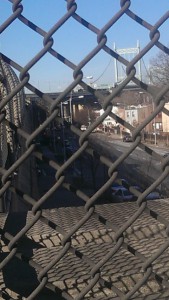 On November 19, 2008, the Triborough Bridge was officially renamed after Robert F. Kennedy at the request of the Kennedy family. Forty years had since passed when the New York United States Senator and former U.S. Attorney General had been assassinated during his campaign for president during the 1968 presidential bid.

I have lovefor the Kennedy’s  I sympathize for the loss of lives in their family; I would not know how to deal with their family losses. This bridge is on Astoria Blvd and 29th street under the L of Astoria Blvd, N train station stop. 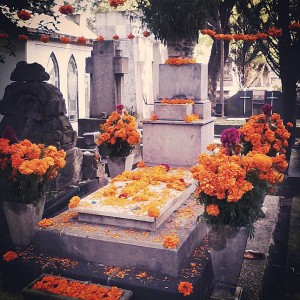 I am of Mexican culture which means we celebrate that which is called El dia de los muertos it is similar in its tradition with All Saints Day. It is a yearly tradition which is on November 1st and 2nd. My family tradition in Mexico is by decorating his tomb with a flower named “Flor de Muertos” which means Flowers of the Dead it has a distinct scent not sweet but rather tart, tangy. We believe that on this very day our dead loved ones are allowed to walk through the gates of this realm and enjoy the treats, food and beverage which they enjoyed when they walked among us.

This picture was taken in Mexico, Dia de los Muertos 2014, my family was the first one at the cemetery this year.I personally love the tradition. It is nice to think we can walk the paths we once did and know that we no longer are a part of that realm but now of another. Also, we do not leave any photograph of our loved one for we fear that on their visiting night they will see their mortal body and never leave to our mortal thus forcing them to roam among us in pain, anger and resentment of their death.

Below is what we did at home for him being that we live an apartment and my living room is not too large. We also ran out of tequila so we opted for some rum I hope he doesn’t mind we did include his favorite fruit which was apple and Mexican bread and candies my grandfather had a sweet tooth. 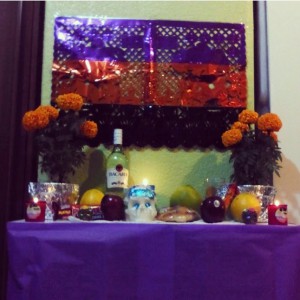 My family in Mexico however is able to do the real deal below is the picture I took last year, I really wish I was there. 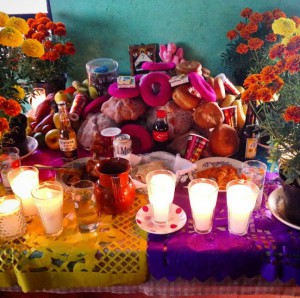 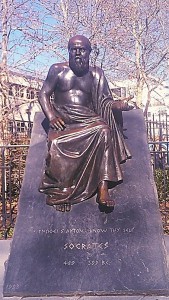 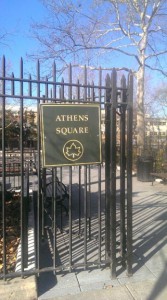 I grew up in Astoria, Queens NY. I have never moved in my life nor do I know what it feels like to pack things in a box, label boxes or anything pertaining to moving. I don’t know if this is a blessing or a curse. I went to Public School 17 Queens here in Astoria, Queens NY which was next to Athens Square Park on 30th Avenue and 27th Street. As a child I would play freeze tag, manhunt, green light red light, double-dutch and jump rope. I find it very interesting and stimulating that the park would bring tribute to Socrates the man famous for his questioning teaching method along with his strong-minded hunt for veracity, he thus sparked the anger of his fellow Athenians and was found guilty of impiety and of corrupting the city’s youth. His killing deeply changed ideas about what it meant and took to be courageous and heroic since he died only for his refusal to abandon his principles.

Another commemoration is the one below of Aristotle. Aristotle was a student of Plato. When he turned 18 years old, he moved to Athens to be further study at Plato’s Academy, where he stayed about 15 years. Aristotle was also a historian he would observe and record data and would analyze the marine life. His observations and interpretations were lifetimes ahead of his time. 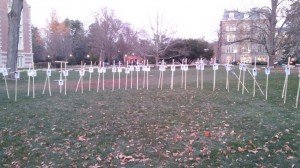 This photograph was taken at Vassar College which is in Poughkeepsie, upstate New York as a campus vigil. I had to take the Metro North to the last stop which was Poughkeepsie the travel time was 1hr ½ which followed by a $7 cab drive. Vassar College is a private now coeducational liberal arts college in the town of Poughkeepsie, New York. The college was originally founded as a women’s college in 1861 by Matthew Vassar, but the school became a coeducational institution in 1969. 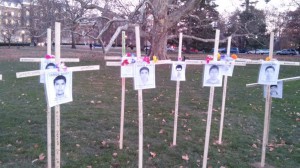 This picture captures the 43 Mexican student teachers missing since September 26th, 2014. The students were from a teacher training college in a town named Ayotzinapa they traveled to Iguala, a city in southern Mexico after participating in a demonstration to promote teachers’ rights seeking to raise funds for education. Iguala’s mayor José Luis Abarca Velázquez, and his wife, María de los Ángeles Pineda Villa were behind the order to local police which had ties to the drug cartel to stop the students; they demanded the police to detain them at all costs and by any means necessary which resulted in six people found shot dead while 43 of the teacher students were never seen again.

This moved me tremendously, mainly because we lost people whom cared to make a difference to the future which are the kids of this world. On November 20th, 2014 here in NYC protests were made in support for families of these teacher students. Although I could not participate because I had to go to work, I made sure to grab my black eyeliner pen and draw the number 43 on my left side of my face. I walked proudly out of my home that morning; I was also approached by 4 people that asked me what it meant as I proceeded to explain to them the way Mexico was terrorizing its own civilians 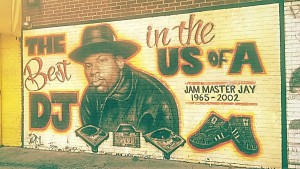 The rap group Run-D.M.C. was formed in the Hollis section of Queens, New York in the early 1980s, I am from Astoria, Queens never moved in my life and far from Hollis but still in the borough of Queens, my love to my borough and music led me to travel to 205th Street and Hollis Ave., Queens to see the mural wall painted of this hip-hop pioneer as well as the street sign which was renamed in his name as a commemoration of his importance in music. DJ Jam Master Jay, whose real name was Jason Mizell, along with Run (Joseph Simmons), and D.M.C. (Darryl McDaniels), formed part of the pioneering hip-hop group Run-DMC- the group is accredited to this days by all types of musicians and public with being the first rap artists to cross into mainstream popularity and were also the first hip hop group to have sold gold (1984’s Run-DMC), platinum (1985’s King of Rock), and multi-platinum (1986’s Raising Hell) albums.  Other achievements under their belt include being the first hip-hop group with a Rolling Stone Magazine cover and the first hip hop group to have their video played on MTV. 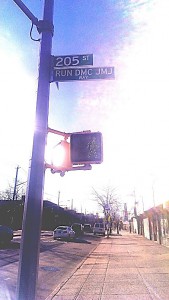 Regrettably, Mizell is the latest of hip-hop’s top stars to die in violence, after Tupac Shakur, who was gunned down in September 1996 in Las Vegas, and The Notorious BIG (Christoper Wallace), who was shot and killed in Los Angeles in March 1997. Crimes which have always been speculated to be a result of an East Coast/West Coast rap war in the 90’s. I then was only in Jr. High School 6th grade to be precise. But I remember it because the JRHS I went to was surrounded by the projects (Astoria Projects, Queensbridge Projects and Ravenswood Projects) introducing me to hip-hop. The most curious thing to me was the fact that Run DMC songs were never about violence or drugs unlike those of Tupac Shakur and BIG. The group promoted education and unity. DJ Jam Master Jay, a member of the groundbreaking hip-hop group Run-DMC, was shot in the head and killed on October 30th, 2002 in a recording studio in the New York borough of Queens. Jam Master Jay, was one of two men gunned down inside the studio at 7:30 p.m. A New York City Police Department report said that Jason Mizell, 37, died of a gunshot wound to the head. It said that he died on the scene and that another man, Urieco Rincon, 25, was shot in the leg and taken to Mary Immaculate Hospital in Queens. He was survived by is survived by his wife, three sons, mother, brother and sister. To this very year, 2014 no arrests had been made and authorities continue to investigate the shooting.