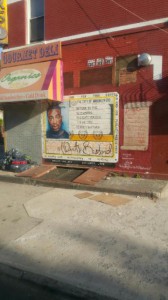 Taken by me, on May 10, 2015
at the corner of Putnam Street and Franklin Avenue,
Bedford-Stuyvesant, Brooklyn, NY

Little about Ol’ Dirty Bastard or “Dirty” by Biography.com:

Russell Tyrone Jones Aka Ol’ Dirty Bastard, or ODB, was born in the Fort Greene section of Brooklyn, New York, on November 15, 1968. Having had a rough-and-tumble youth, Jones and his cousins Robert Diggs and Gary Grice formed a hip-hop group that incorporated symbolism from the martial arts films that they loved.The nine-member group was named the Wu-Tang Clan and went on to be one of the most successful hip-hop acts of the ’90s. Having a variety of MCs with distinctive aliases (Diggs became RZA, for instance, handling production duties), Wu-Tang spun off an array of solo acts from its debut album Enter the Wu-Tang (36 Chambers).Jones took on the moniker Ol’ Dirty Bastard, with the reported implication that there was no sire to his particular brand of rhyming. Also known as ODB, the rapper developed a crazed, free-flowing style that incorporated singing and warbling.

Off the successful launch of Wu-Tang, ODB released his debut solo album, Return to the 36 Chambers. It reached the Top 10 of Billboard’s main albums chart and featured the singles “Shimmy Shimmy Ya” and “Brooklyn Zoo.”ODB was also known for his shout-out rhymes on the intro and bridge to the remix of Mariah Carey’s 1995 hit “Fantasy”; he later had another hit collaborating on “Ghetto Supastar (That Is What You Are),” with rapper Pras and singer Mýa from the soundtrack of the film Bulworth (1998). The song reached the Top 10 on the R&B chart and Top 20 on the pop chart.Starting in the fall of 1997, however, Jones faced a number of charges.

He was arrested in November for not paying child support for the three children he had with his wife Icelene. The following year, he was shot in the back during a robbery, though the wound was not severe. More arrests followed over the ensuing months, including charges of sneaker theft, missed court dates, public threats of violence to others, traffic violations and drug possession. While Jones’ media antics were often the butt of jokes, there was a terrible, real cost.By the summer of 1999, it was clear that Jones had an addiction to drugs, and he admitted himself into a rehab facility in New York. Around this time, in September 1999, he released the album “Niggaa Please”, which also reached the Billboard Top 10. 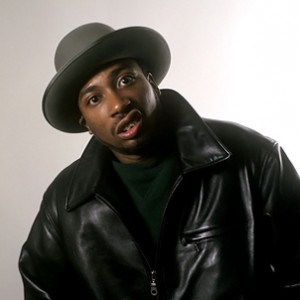 Here is my memory and reflection with Dirty:

Despite the images and publication created by media, he was a very sweet and humble guy in his private life. I had a change to do background vocals for Wu-Tang Clan affiliated artist. When I was chilling with them in studio in Bedstuy, Brooklyn, he showed up in the studio several times. I was not really sure if he got some cash on him at that time, because he was one of the N***as in the game, who spend all of his money they earned right after they got it in their pocket. In late 90’s the rap industry was all about gangsta. And recording and music companies were taking advantage of those talented rappers, because they know these boys in the street were talented but did not know any knowledge about the flow of the money in the industry. Dirty was one of them. He spent all the money on cards, champagnes, girls, and drugs. He was really representing the gangstas in the industry. by the way, when he first saw me in the studio he said to me “Hey how you doing, pretty Chinese lady?” I did not know he was infamous Ol’ diry Bastard, so I said to him, “I am not Chinese, but I am Japanese.” He was very embraced and sincerely apologized to me. And he said, “Wow Japanese female rapper, cool.” “Let me hear how you spit.” Again, I had to correct him that I am a singer, and not a rapper. Whenever he came to the studio, he always buy me food and drink to make sure I am alright. And sometimes he offered me some marijuana, which I always politely refuse to be offered.

Here is an anecdote I found on the web. Accordion to biography.jrank.org, the author said:
“The Wu-Tang Clan issued a limited-edition single called “Protect Ya Neck” in 1992, and news of their innovative style spread from college radio stations to major labels. Enter the Wu-Tang: 36 Chambers appeared the following year, with ODB preparing the way for the group’s contract with the Loud label by offering an out-of-control version of “Somewhere Over the Rainbow” before a group of executives from Loud’s conglomerate distributor, RCA/BMG. ODB showed a flair for attracting attention to the group; he once drove to a welfare office in a limousine to collect food stamps, trailed by invited camera operators from the cable-television music.

This story tells how he was humble and crazy in a good manner. He was very naive and pure, and did not know anything about society, he was used by music industry, and his producer Rza, who is living like a king in his luxury house in Bergen County, New Jersey, which was built from sucking up all the money from all the members and affiliates from the rest of Wu-Tang family.
When I heard he passed away, I had to cry. He introduced me to the world of ghetto fabulous, and law of Brooklyn streets. He introduced me to the best soul food restaurant in Crown Heights, Brooklyn. And he left me with all good and unforgettable memories and fantastic songs.

My favorite join from ODB
Courtesy of Brooklyn Zoo

Dirty, I will remember you for the rest of my life!