As a an advocate for LGBT people with mental illness, I was very thrilled to see that Citytech provides a course, ENG 3403 Section D578, which students read, study, analyze and discuss about James Baldwin’s work. 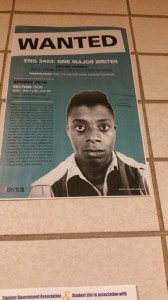 Bio.com states that Baldwin was born in Harlem, New York. His mother Emma Bardis Jones divorced his father due to drug abuse when her son was just a baby. She then married preacher David Baldwin. The family were poor and a young Baldwin spent most of his childhood looking after his younger siblings.

He showed a prodigious interest in writing from an early age, attending Frederick Douglass Junior High School and then De Witt Clinton High School, from which he graduated in 1942. Baldwin became a Pentecostal preacher in 1938, at the age of 14, but gave this up at the age of 16 before winning the prestigious Julius Rosenwald Fellowship for his contributions to publications such as ‘The Nation’ and ‘Partisan Review’ in 1944.

Just before winning this prize, Baldwin lost his step-father and gained his eighth sibling on the same day – 29 July 1943. He then moved to Greenwich Village, a New York neighbourhood popular with writers and artists where he formed a friendship with Richard Wright. Through Wright, he was able to land a scholarship in 1945, giving him funding to have his work published.

After 1948, and the publication of his first major essay, ‘The Harlem Ghetto’, he divided his time between New York, Paris and Istanbul.

Baldwin drew heavily on his own life experience for his first novel, the modern classic ‘Go Tell It on the Mountain’ (1953).He turned to writing plays after this with ‘Amen Corner’ being released in 1954. It looked at the phenomenon of the Pentecostal religion. This play went on to be produced at Howard University in 1955 and staged in Broadway during the mid-1960s.

His second, ‘Giovanni’s Room’ (1956), detailing issues of race and sexuality, was closely followed by his first book of non-fiction, ‘Notes of a Native Son’ (1956). Baldwin published what is widely held to be his best novel, ‘Another Country’, in 1962, developing his themes concerning the identity-forming matrices of race, class and gender.

Baldwin’s later novels are widely held to be lesser, more one-dimensional works, such as ‘Tell Me How Long the Train’s Been Gone'(1968), ‘If Beale Street Could Talk’ (1974) and ‘Just Above My Head’ (1979). However, while the polemic nature of his writing was seen to diminish his fiction, it strongly informed his role as social commentator.

Collections such as ‘The Fire Next Time’ (1963) secured his position as one of the foremost essayists of his generation, as well as earning him a place on the Advisory Board to the Commission for Racial Equality (1964-66), and a prominent role within the civil rights movement.

Between 1984 and 1987, he held several lectureships in US universities, including a professorship as the University of Massachusetts-Amherst. James Baldwin died in Paris on 1 December 1987 from stomach cancer, at the age of 63.

When Baldwin returned from France in 1962, he visited the south of America and began a tour of lectures about the civil rights movement gaining traction at the time. He positioned himself in between Malcolm X and Martin Luther King Jr.

He joined author Lorraine Hansberry and actors Harry Belafonte and Marlon Brando as one of the most prominent and high-profile civil rights figures in America.
Baldwin has had a strong impact on writers of all backgrounds thanks to his defiant position as part of a minority.

In 1992, Hampshire College in Amherst, Massachusetts, where Baldwin once taught, launched the James Baldwin Scholars program, which helps young people in the urban area engage with literature.

Fellow black writer Toni Morrison has collected a two-volume Library of America edition of Baldwin’s stories and essays and the United States Postal Service has honoured him with a first-class postage stamp featuring his profile.

Baldwin died on 1 December 1987 at the age of 63 at his home in St Paul de Vence, France, from stomach cancer. He was buried in New York.

MY REFLECTION ON JAMES BALDWIN

James Baldwin was definitely a star during Harlem Renaissances.  When I first read his novel, Giovanni’s Room, I saw and imagined that the author should be very sensitive person.  Later find out that he was a LGBT person.

I have to give him a credit for being open about his sexual orientation and his believes during that era.

I now know African American were not allow\ed to vote til the year of 1965.  I must have to imagine there must be an obstacle for somebody like James, who is not only a people of color, but also gay.

To the best of my knowledge, gayness was listed as a mental sickness until 80’s in
American Psychological Associations (APA) standard.  Moreover, NY State Court did not recognize same sex marriage til in 21 st Century.

Probably in his day, there should not have been any name for “gay” existed.

I must have taken a lot of effort and courage to be out and be outspoken about what he was, weather or not, people would accept him as he was, as well as the sensitivities and preciseness of his words in his novels.

James, you will be dearly remembered, honey.