In the twenty-first century as since, well, forever, we’ve always tried to have the most convenient route possible. Many times we try to find the quickest route imaginable because we want to get to our destination for whatever reason, work, class, etc.,. When we plan a trip or vacation somewhere we don’t necessarily look for the most ‘beautiful’ or ‘longest’ route possible because it’s just not something we normally do or think of.

As we go on with our days we seem to have lost the touch of exploration, similar to Will Self, whom walked from JFK International Airport to his hotel room at the Crowne Plaza Hotel in Manhattan. That is exploration.

I’ve created a mere alternative route upon leaving the Borough Hall (2, 3, 4 & 5 trains) orCourt Street (R) stations. Ideally it would take about 15-20 minutes give-or-take from the station to City Tech. Most of us likely get off from the metro and head as fast as we can straight along the street we face. This is likely Remsen Street or Joralemon Street and then turning into either Jay or Adam Street. The proposed route I’ve created takes you, the walker straight to Court Street itself and headed northward for the Manhattan Bridge.

Walk straight along Court Street and as you walk, you can pause and admire the architectural design of the Borough Hall building right outside. Though it is not used much, it is still a sight worth admiring. The Borough Hall building and surrounding buildings lets you take in what Brooklyn looked like back in 1800s before Brooklyn became part of what we now know as New York City. The area surrounding the Borough Hall building is Brooklyn’s own smaller skyline in front of the skyscrapers in Lower Manhattan to the west. When Court Street becomes a curved road, walk onto the pavement on Cadman Plaza and proceed to the centre where the trees leave an open space. Take a breather and take a moment to take in the surroundings. Look south along Court Street and you will notice the stark difference in how the streets look. Court Street would appear to be a modernised view of Brooklyn meanwhile the street to the left would appear to be a bit more old fashioned. Borough Hall is the centre piece of this juxtaposition of what you can call past and present. Continuing to walk northward you’ll see a fountain and listen to the sound of the water as it flows from the fountain, assuming it’s sunny or at least not sleeting or raining. To the north end of Cadman Plaza, is the Korean War Veteran’s Park which is accessible by continuing to walk straight ahead through the tree line. It’s almost as though strolling through Central Park is all the same. This area is designated as a memorial for the fallen in the Korean War of 1950-1953. Depending on how you may feel, it’s courteous to pay respects to the fallen. Being in there can bring a sense of peace and tranquility. It’s quite calm being so close to the street where cars hustle and bustle to get somewhere.

Upon reaching Tillary Street. It can be a bit decisive, continue or turn east toward Jay Street and to City Tech which is right next to where you’d likely be standing. Deciding to continue northward leads to the Brooklyn War Memorial. It is designated for men and women whom served in World War II and whom were from Brooklyn themselves. Similar to the Korean War Veteran’s Park it brings a sense of peace being there. The trees and the grass can help with feeling closer to nature. Perhaps even more so than at Central Park! A suggestion would be to take another breather and to perhaps sit in a bench nearby, enjoy the breeze a bit and take in the sights that you’ve witnessed through this route. A brief look into the historical point of view that is the area around Borough Hall.

It may be time to go to City Tech, simply turning east toward Cadman Plaza East and crossing through the extension of trees and grass will place you back onto Adam Street. City Tech is a block south along Adam Street and will be easily spotted upon reaching Tillary Street and then turning into Jay Street which is recognisable by the large sign and by a playground across the street.

Cadman Plaza is by no means Times Square or Union Square, however it too has it’s own respective sights to see. The area around City Tech is a great place to see and to get a glimpse of what Brooklyn was like in the 1800s, perhaps not identical or even close to mimicking it but you can get a sense of how much this borough has changed over the years and how it has developed into what it is today. Happy walking and enjoy!

One method for writing sentences is to diagram them using a chart. The chart shows the sentence but almost in a puzzle like form. This was formerly used to teach new users of the English language but has since been tossed out and is not recognised by the Common Core. English teachers also agree and say that diagramming sentences does nothing to teach but how to make diagrams. Whether or not it is actually practical can be debated but one thing is for sure. It’s a unique way to write sentences.

Today is November 5th, 2014. Project number three was given to us in mid October, by far this was the most painstakingly difficult one when it came to painting. It took me a good two hours I think to complete it. The Digital collage was by far the in comparison and in complexity. Though I am not an expert in the use of Photoshop, I learned a great deal at how to use it compared to the compute class I had back in high school. I don’t consider myself the best designer or collage maker but I think in this project I was able to develop myself more. I liked this project much better than the last one because I enjoyed doing this one.

On September 22nd, 2014 our class took a trip to the Centre for Book Arts and the Rubin Museum. I think we were in the Lower East Side in Manhattan, though I’m not exactly sure. The trip was a very nice experience because we got to see what we’ve begun learning in class such as  ambiguity.

The Centre for Book Arts was fascinating as I’ve now seen how books are put together. Though it’s own exhibit was smaller, there were some interesting things to see such as what looked like a sculpture of a woman’s dress. As a joke I remember thinking to myself, “it looks like a giant Oreo stacked up”. During the speech about book binding I saw how much complicated it was to print things onto paper and I don’t think I would’ve had the patience to go through every individual letter just to write something into a poster. It made me grateful to printing from an ink printer and how easy it is now  than it was in the past. 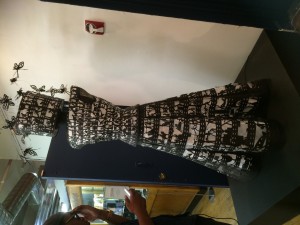 I’m not sure what to make of this, but it reminds me of a woman in a dress.

The Rubin Museum is another story. Though a bit of a walk from the Centre for Book Arts, it too had great pieces of artwork to show. The museum had a variety of paintings that were… phallic shaped and in detail. A little unusual in my opinion but nonetheless very nicely done. Very stable as well, and no ambiguity to question of. Other than the phallic shaped paintings, I saw a particular one that showed what looked like a sci-fi prop. It was standing on its own legs and it liked like it could walk if given the means. Outside of the art, the building itself is very nicely built and designed especially the lobby.

I enjoyed this trip and I look forward to more trips like this in the near future. 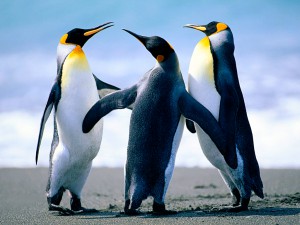 This is a temporary placeholder.

This is a temporary placeholder…