So, project #1 was very fun to do. Yes, it did take time cutting and to paste, but at the end it was a beautiful piece. In class, we did our critiques, and each person had to critique at least two people’s work. When they critiqued my work, I felt both accomplished, but also could have done better. I felt this way because i accomplished everything our professor wanted us to do. Peers liked my worked, it was neat, and very understandable. In the other hand, i critiqued my own work, which is a good thing to do, and I thought maybe i could have done a little better, but overall I think i did pretty good. I liked everyone’s work in general, but since this was a critique, it was time to be honest (evil laugh). Some were hard to understand which were ambiguous  and which were stable.  Others had to economize more so we could understand it better. The cutting was okay, but there were some that was pretty…. scary . hahaha. Just kidding, but it was a great critique from everyone and of course thanks to our professors and mentor. Great Job everyone ! 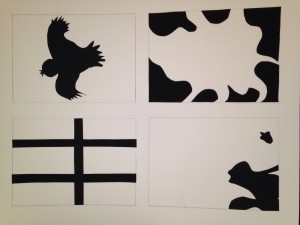 This project was a little frustrating to do because I had other things going on. So I finished this last night around 12pm. Took me an hour or so to do it . This morning I finished up some minor touches. But , it was interesting and very creative project to do.

Its vertical ! The picture for some reason made it horizontal !

Today, September 15, we discussed a majority of different things that had to do with our first project. We talked about the next few things we need to do for our final work due Wednesday. Our professor posted the guidelines for the thing we had to do. It’s a bit overwhelming, but it will help us do things in such a way that the way we see it will be interpreted in many ways. What we have to do next is pick 2 stable and 2 ambiguous drawing that we already have and to cut out ONLY the black part of that drawing but in black paper. Then you paste these shapes onto the 14×17 Bristol pad with the measurements of 5×7. While discussing about our next steps, we also had a group critique of our Inked work we had to do over the weekend. All of them were amazing, and some just had to do some adjustments. We talked about the purpose of Economy and Community within this project and how an image could be or stable and more ambiguous. At the end, our professor explained how to use an Xacto knife, so that we don’t have to cut our fingers. So careful everyone ! We mostly discussed and worked in groups today, and all we have to do now is follow the guidelines that is on her website and complete our final work that is DUE WEDNESDAY ! 🙂 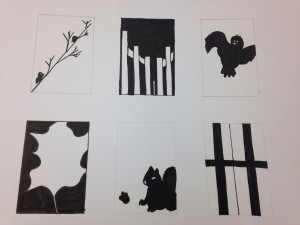 Took me 2 hours for guidelines and inking. 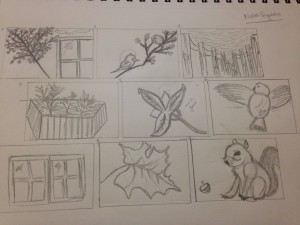 These are some of the things I see right through my window frame .

I usually don’t look through my window and see what’s going on outside , but I come to realize that sometimes I should. So, I did ! I started to visualize what I see right through my window frame, and I found some interesting things that never catches my eye. I see a semi-tall tree right in front of my neighbor’s house which faces me. This tree has been there since the day I was born, and during the Spring time it blossoms beautiful small flowers. Not only do I see the tree, but I see the sky above it, which really makes my morning. It has  these weird multi-colors, that you seem like your in a different planet. It could become like this pink to purple color, and sometimes its this green and blue color. The clouds becomes weird looking shapes that blends in with the colors. These colors remind me a lot of galaxies in space. Sometimes, on that tree, I see birds that like to rest under the shadows of the leaves, and my neighbor throws bread so that they can eat. I think that is samaritan when it comes to animals, because they need food just like we do. Through this window frame it give me a aesthetic pleasure, because with my visualization and my imagination I see art.