Before we begin to discuss the impact and effects social media has upon attention and participation structures, and the psychological being of an individual please take the time to watch the video above.

5..4..3..2..1.. You are back! Welcome. Let me start by saying if I could get away with just posting this video I would because it provides information that I have found through research and the ‘Signed Off’ experiment. Social media has turned us against our own selves. We have become so invested that we forget what we truly want, need, or expect ourselves. We based these things on what we see online. We base our entire lives online, but it would only seem logical now that most of us live there mentally and emotionally—physically we haven’t gotten there as yet (can you imagine the move?). Social media has hijacked the way we see life and turned it into a form of marketing which is as most things are connected to capitalism, but there is more to this than I ever thought. When I first set out to do this experiment I never once intended for it to turn out this way. Never did I think I would be so repulsed by my findings yet still have the guts to continue to engage and I guess that’s the trap. We know how much these social networking sites have affected us but we are so addicted, attached, nurtured, and invested that we cannot detach. The act of doing this almost seems impossible and culturally abnormal.

Within recent years, from the moment a child is born they have an online presence. Mothers have started to post their bundles of joy from the moment of conception. According to, Today.com 2, Millennial moms have created personal accounts for their children even before their first birthday. These children grow up with a social networking presence and are more used to these networks than they are with the slides in the playground. Again the question that is to be asked is how does this affect these children? How does this constantly, consuming, daily routine change us and affect us not only on a cognitive level but also on a psychological level?

From, ‘Signed Off’, I can say that one of the very first effect I noticed in myself was the constant worry. I found myself worrying about the information I was missing out on, the deletion of a post I wouldn’t be lucky to see, and all the content that would surface and I would not be a part of. In Joshua Becker’s article, “7 Important Reasons to Unplug and Find Space”3 he mentions how the Fear of Missing out or FOMO 4 which have now been recognized as psychological disorder. Social media and this sickened attachment has led to users both young and old to become psychologically corrupted. As users we feel the need to constantly be attached and engaged. As I continued with the experiment, I worried constantly about what I was missing even though I adjusted to the strange new way I was engaging with the world. In several blog posts from ‘Signed Off’ Digital Diary component I write about this ongoing agitation and feeling of worry which took me over and led me to become somewhat lost with the process of detachment. 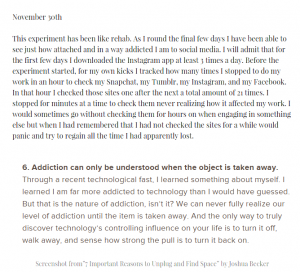 The worry led to feelings of loneliness, anger, and a sensation of emptiness. I also felt an overwhelming sense of anxiety and pressure to want to connect due to temptation of access being so available. My mind sometimes became preoccupied and overwhelmed with this consumption and not in the sense that I was worried that this was typical behavior but worried in the sense that it when I needed to have this interaction. These are some symptoms of addiction. Becker went onto explain how it is only after having technology or a byproduct such as social media taken away does it result in the person realizing the addiction.

As the worry, anxiety, fear, and addiction symptoms subsided what raised was a great deal of attachment issues. In Anthony Turner’s, “Generation Z: Technology and Social Interest” 5, he explains how this generation has formed a “digital bond”. This bond has gone beyond the device and into the apps and social sites creates as an affordance of these technologies and now we are all facing the prices. We are dependent, attached, and quite frankly consumed by both the thought and process of social media. 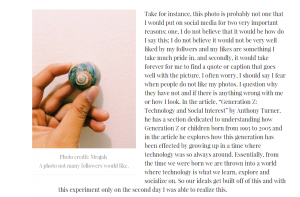 Excerpt from “Why Dont you Like Me?” from SignedOffBlog

With the attachment bond came the gratification. Social media
has over the years given users the biggest way to find acceptance. With a media industry so stagnated with the idea of perfection as in the use of Photoshop and other media distorting tools to create perfect sculpted bodies the ability to receive praise on ones photos has allowed for self-esteem building and the ability to be uplifted. This gratification has left to the over modification of self-presentation. Users amplify their identities to fit in or to be seen as Instagram or Facebook worthy.

With that said, this affordance has come the constraint that now users are turning to these social sites to find gratification for every act they commit. They seek gratification immediately according to Turner and this immediate sense of gratification had led to never ending downtime. 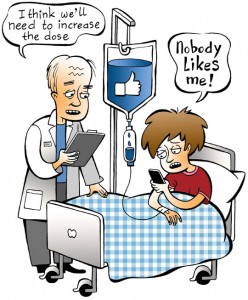 Other social technologies such as read receipts on iMessages has only further enraged this. Immediate connection was once a powerful thing but due to social media it has ravished a generation from not knowing how and when to turn off or power down themselves or their devices. This gratification has also been a key part to the rise and expansion of online participatory culture and the model for structures. The persistent need to actively share and become involved has ruined the ability for moral and ethical judgement. The internet and social media has become bugged with the overload of violent, raunchy, over-sexualized content but due to its nature of instant sharing and now gratification this could only be expect.

As face-to-face contact has declined tremendously in aspects of human growth, development, even relationships over the years. In Lori Ann Wagner’s, “When Your Smartphone Is Too Smart for Your Own Good: How Social Media Alters Human Relationship”, she explains humans as being “Innately Social Creatures” (114)6. She then goes onto explain how social media has changed our interactions due to it being a mediated means of communication. 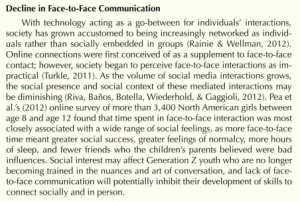 These lessened interactions have made us timid, lack social skills, and common etiquette . We have also inturn lost the ability to interpret emotions without the use of emoticons due to lessened interactions and face-to-face contact. This decline in face-to-face communication according to Turner, “potentially inhibit the developmental skills of skills to connect socially and in person”(109)7. This decline has also led to longer hours on devices which lessens sleeping hours and a lessened range of emotions which make it harder for them to deal with conflicts in an interpersonal environment. This is leads to the rise of cyberbullying. Children have been raised in mediated environments so when conflicts arise in person they tend not to know how to deal with them. They are their bravest selves behind screens; these screens also house potentially damaging information. They use this knowledge to their advantage because it is the only way they know how to deal with conflict.

With a bountiful of these social media sites being microblogging communities their content has become minimized as well. Vine for instant has shortened the video limit to a whopping 6 seconds. Although, this has increased creativity, it has lessened attention spans. Longer videos are no longer desired. The shorter, more compact, and concise a video is the easier it is to process and find information. Generation Z ‘views information’, according to Turner, Wagner, and even Becker. This means that we no longer read for content but search for it. This limits our common sense, creativity, and original thought. For New media writing however it is proving effective. 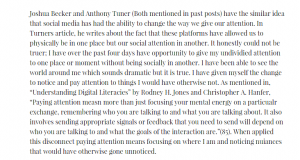 Due to the nature of the type of writing readers are allowed the new affordances of shorter more concise writing which divert attention with the use of hyperlinks, numerous add, photos, and videos. New media writing as a result of social media has become the growing trend in which all writings are based off of. As much of ‘Signed Off’ revolves around understanding how attention structures have been affected, I can attest that through the experiment was I able to see just how diminished my attention span has become. Social media presents shorter information which makes for quicker reads and more browsing. With the disconnect I was able to rewind some of that training and force myself into paying attention to longer timed videos as well as pushing myself to read for information and not search for it.

With all this said and done, I hope that from beginning to end you have been able to see how much social media has redefined and rewired attention and participatory structures as well as  the impact it has on the psychological being. Social media has revolutionized our way of communication but with it has come the ability for us to forget who we are—humans. We live in a world modeled by face-to-face interaction and stimulation; mediated communications can only enable us to do so much in the world. This new way of communication is changing how we write, think, and interact. A disconnect once in a while prevents us from forgetting who we truly are and what we are capable of. It is important to remember that it was due to personal connections that lead to the development of these technologies. We once craved longer time spent with one another, so let us not forget each other now that we have the means to connect more frequently and instantly. Let us use the technology to mold relationships, participation, and growth. Let us use New media writing and composition to bridge the path between virtual and reality living. Let us remember that ourselves online in this new media spaces are reflection and extensions of ourselves and not the other way around.

2|Dubin, Alesandra. (2014, Oct 18th). Have a social media account for your baby? 40 percent of millennial moms do. Retrieved from Today.com: http://www.today.com/parents/have-social-media-account-your-baby-40-percent-millennial-moms-1D80224937