What a week! I was feeling stressed out last week about not getting an internship. Professor Pellicciotta and Professor Goetz helped me find one. I got a copy of the employer’s list and began sending out my resume immediately. I applied to NYSPIRG, Uniworld Group, Firefly Design, New American Chamber of Commerce, Calling All Graphics and others that were from another site. I received a response back from a company called Vibe Inn, a small music business that promotes new and upcoming artists and wanted to set up a telephone interview. After I confirmed this interview, another company, Marla Gotay from Calling All Graphics contacted me. I spoke to the owner via email and received the internship. At first, I was like “Wow, no interview?” I guess my portfolio was enough. So I cancelled the interview with Vibe Inn and informed them of receiving an internship. I’ll admit, I was preparing myself for this type of work being part of the music industry which was something I wasn’t sure of if wanted to get back into that type of field. After my confirmation with Calling All Graphics, other companies started replying back to me. I was shocked and wasn’t expecting a quick turnaround. Then I was feeling like maybe I shouldn’t have responded back so quickly. I was just too eager and didn’t want to waste any time. There was one company that I was hoping to receive a response back from and that was Uniworld Group, Inc. The company was based more on the community, arts and entertainment. I felt that maybe this was a place I can see myself receiving some growth from learning more about their company. Then I received a response back and was told they were going to contact me next week to discuss more. I wasn’t sure on how to reply back because I already confirmed with Calling All Graphics and to start on Thursday. Decisions, decisions, decisions. Sigh! I weighed my options and had to turn them down :0(. It wasn’t a guarantee that I would get the internship and didn’t want to waste any more time into not completing my hours. I did send Uniworld Group Inc. a reply back and hoping for a future position after I graduate. 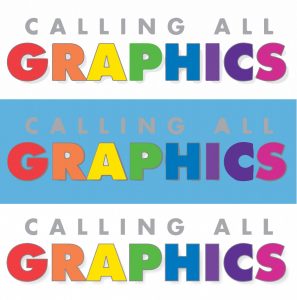 My first day at Calling All Graphics felt different since I have not worked for someone in so long. I arrived at 9 am to begin working. It was a nice little setup in a room. Mrs. Gotay has been doing her business for over 30 years and still going on strong. She does a lot of work for restaurants and other places creating menus, window signs, logos, posters and more. She also has an organization in theatre. We were working on ID cards for a deli. The ID cards are those little cards you see displayed on top of sandwiches and salads that are in the front to identify what kind of items they prepare. It wasn’t too bad. The next project I worked on was a sign for a food stand Kiosk. The client wanted some lettering designs to be placed on the back with the food items they sell. It was cool to just play around with some text and arrange them in different orders. The last project was a window sign for a deli store. This was just a large photo with their logo and lunch specials. It was interesting to see that Mrs. Gotay not only goes by the content the client wants but she also comes up with some catchy titles for the client that will draw the customers in. I used to think you just give them what they asked for but I see that she also engages in helping her clients as well with their content of what to say. Overall the first day wasn’t bad. This type of work I am familiar with because my first graphic design job was working for a company making signs and circulars for supermarkets like Keyfood, C-Town, Associated and more just to name a few.