The execution of Central Park is considered a green gem. Personally, I feel that NYC would lose its identity without this 840 acre park. A park that re directs you into its own world. I should start by saying the construction of the Belvedere  Castle in the park is remarkable. The castle serves as an observation point. You’re able to view the East side of the park and enjoy the pond in front of it. The small castle transports you to a royal feeling. It gives a sense of fiction and fairy tale and what other better way than to provide an escape from the hustle and bustle the city has to offer.

The park also had exotic animals before Robert Moses came and created the zoo layout we all know today. But I find this a rather interesting action. A park in the middle of city allows exposes visitors to exotic animals. This is another example of feeling away from the city. People are meant to focus on the animals present and forget where they’re at and that’s the whole purpose Frederick Law Olmstead and designer Calvert Vaux envisioned when executing the park.

The parks landscape welcomes its guests its almost as if the landscape subconsciously speaks to us.  Many people gather around and just enjoy being able to sit, run or picnic in a large green open space such as Sheep Meadow. Also as they connect with the environment by the strawberry fields. When you surpass an entry point you’re able to see a long row of benches curving with the walkway. This effect allows the chairs to communicate with us almost as if we could feel battling each other for you attention. Providing plenty of space to sit comfortably.  The park has it’s ingenious moments where it provides venture, almost as if you were going from one world to another such as tunnels and archways blended in with landscape. Central Park has so much to offer and so much to describe.

Though, my best words to summarize it would be living in a fairytale and a place that’s poetic and resonates with the heart and it’s emotions. 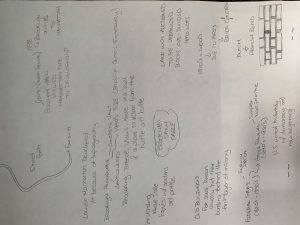 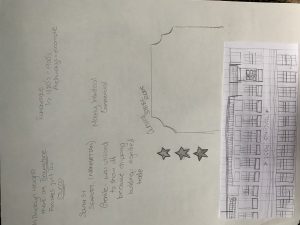 Manhattan’s and Brooklyn’s streets cape were created differently, one of the reasons why? Is because of topography. They each had a different layout. Meanwhile, Manhattan mostly had flat lands to build and grow, Brooklyn had hills to deal with; a topography that wasn’t stable. This meant that Brooklyn took a little more time to develop because of the physics and dynamics it required to grow. Once Manhattan began to boost it’s economy with trade in the 20th century. Manhattan was known for its workforce and a rapid pace environment. This allowed the neighborhood of Brooklyn Heights to be an escape from the hustle and bustle of the city.

Brooklyn in the other hand became a safe haven for people who wanted to live in some sort of quietness and peace. Although, Brooklyn wasn’t quite developed at the time yet it served as a great place to have views of the city. Also, the streets of Brooklyn when the Brooklyn Borough Hall was constructed; the streets were developed to look at Manhattan. This was a notion of welcoming the people coming from the ferry that transported people from the Manhattan to Brooklyn since that was the main way of connection and transportation between the two pieces of land.  Now, Brooklyn’s format of streets are limited to the fact that Brooklyn had various districts at the time and each section created their own layout of a grid. This is why we see discontinued streets nowadays. Eventually, when Brooklyn became an official borough and all six districts became one, they had to compose all streets to unite with each other and this created the a dis uniformed mesh.

Meanwhile, Manhattan had the perfect grid with rectangular lots for future builds and progress. It was almost considered perfect.

A foundation or a principle when it comes to the further development of a society in this case a city is to have in mind the future and the potential it could have. Therefore, that’s exactly the thought process that occurred while developing Manhattan. One of the key factors in the design of Manhattan’s urban development was and is the grid. The way the grid was constructed allowed for skyscrapers to be constructed for a future reference. The lots created by the grid enhanced flexibility and this allowed for optimization of land use. This allows us to understand the reasoning of why NYC is such a high-profile end city where the cost of living reaches heights and sacrifice to meet. Since a grid is obviously in a rectilinear format, this means that the rural areas that didn’t follow this rectilinear form in the 19th century eventually would morph into something rectangular or squared to integrate with the grid. As Manhattan progressed in architectural growth; they mainly focused on industrial and commercial buildings. The area was going through a boost in their economy where people/owners felt the need to somehow show off with the architecture used.

One of the distinct differences we may notice about Brooklyn’s architecture in their neighborhoods such as: Brooklyn Heights, Carroll Gardens and Bay Ridge is the Dutch influence. We can see influences highly in churches and civic buildings around the borough. One great characteristic is the symmetrical profile always being focused on the center of the building; interiors are more ornamented than the exteriors. A key factor the grid development in Brooklyn is that Brooklyn was composed by six towns and each of them developed their own system allowing room for error misconception once Brooklyn became the county we know today. This is also one of the major differences Brooklyn from Manhattan since Manhattan had a steady and effective system while in Brooklyn you may how an Avenue goes on for so long and then gets cut off by another street instead of being nearly infinite as in Manhattan. Breuckelen which was the name the Dutch had at the time had water bodies above ground that we no longer are capable of seeing from a plan view since all the water streams we re-directed and re-constructed to work and be effective underground.

Write a brief paragraph about this Course site and explain what visitors will find here.