According to the “Case 7: Ambitious project Manager”, the PM did what he was asked to do. He was only following directions to keep the budget at $50 million. Unfortunately, the PM wasn’t successful even though the PM did the right thing because after he lost his project engineer, he wasn’t able to hire a new engineer with any experience due to the budget of the project and he also did not receive any supervisor’s help. Therefore the OIC distanced himself so that he wouldn’t be held responsible about the project.

The owner wants to save money for the project he/she wants to do by not hiring a GC, what are the pros and the cons, what risk has the owner assumed by making this decision?

All in all, after reading and analyzing case 7 I have come in conclusion that it isn’t the Project Manager (PM) fault. I have my reason as to why I defend him. The project bid was at $51,000,000 million dollars and the only person who can negotiate the bid price is the Architect. The Architect has the responsibility to negotiate or came to an agreement if he wants the project bid to be high or low, he decides. I also think that the Project Manager (PM) was treated unfairly because in the case it states that “during one year of construction, the PM lost his project engineer and was not allowed to replace him with any experienced help”. Other things that happened along was that “he had to hire from outside” and “he also did not receive any home office supervisory help”. The thing that was strange and odd was that “the Officer in Charge (OIC) would meet him for lunch once a month at a remote site”. These reasons have led me to agree and conclude that it isn’t the Project Manager (PM) fault that the project bid has gone up to $51 million and I think that the Project Manager (PM) was treated unfair during this whole issue.

One of the main problem in this case is communication, the project was bid lump sum at $50 M, but then there was a $1 M big error. The PM lost his project engineer and was not allowed to replace him with any experienced help. He did what was right trying to hire someone from outside and get the work done as soon as possible because he didn’t receive any supervision or support from the GC and the Architect.

The Architect didn’t do his job well, he didn’t supervise properly and the PM took most of the blame. At the end, trying to get the job done so cheap, fast and without a proper supervision can cause a lot of problems in the future.

Communication was a big problem is this case study. The PM was trying to get the job done, with no help from the Architect or a consultant. The PM took most of the blame, when there should have not been a bid error because there is always a proposal. The Architect have to review and then approve it before anything gets started.

The Architect distance himself because he probably did not wanted to be part of a poor group project with errors.  The Owner did not wanted to pay a PM who is experience because a new PM would be a lot cheaper because they are just trying to get a job even if they are charging probably 50% less than experience PM.

This shows that trying to get the job done fast and cheap could become very expensive towards the end.

Sub-contractors are independent business people he would save money because he doesn’t have to provide insurance for them or pay employment taxes for them. Depending on the owner’s jurisdiction and scope of the project it is also possible for him to save money by being his owner General Contractor, this also depends on the local law.

Some of the cons of not having a General Contractor are. They know the codes, permits that need to be pulled and the process to get the job done as efficiently as possible. GC also understands which components need to be completed and when how to schedule their sub-contractors accordingly.

General contractors can likely get better prices on materials and labor, they already have good relationships with sub-contractors so they’re guaranteed to get better prices on materials and also saving the owner money in the long run; but most importantly a GC work is also warranty for a certain amount of years and also the liability is transferred to the general contractor and not the owner if someone gets hurt on site ( Workers Comp)

Question: What risk has the owner assume? What risks are the designer and contractors assuming through this system? Draw up an organizational Chart depicting this condition and the “standard” condition.

Answer: When there comes a situation like this where the owner makes the decision to hire consultants and their own contractor without the use of the standard method he is creating a situation where many disasters can happen, from miscommunication to liability that can be caused by being disorganized. For example the standard method involves having a general contractor who is incharge of hiring a team, who he is knowledgeable about. But when the owner hires his own consultant he is taking a chance on someone who he may know and have personal ties with, but if something was to go wrong that consultant can pull back at any moment. Also this method can cause the individual contractors to work separately and independently from the others who are working on the project creating a huge chance of miscommunication. 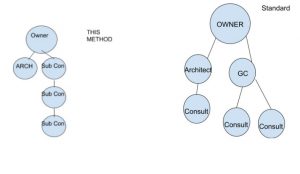 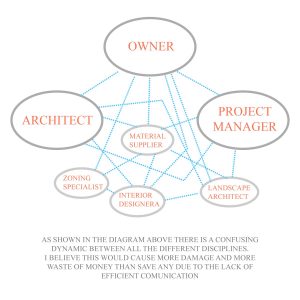 BMishara@citytech.cuny.edu
Office: Voorhees 205/207
Office hours: Tuesdays 10 am-2 pm in V818 and by appointment