Posted on September 28, 2016 by Jon-Anthony Montaz

In the class trip to the exhibit called the Aperture Foundation, it was a great experience that I will never forget. First of all the surroundings in this exhibit was very peaceful. So peaceful that you can actually relax on the couches that they have and enjoy observing the photographs and art that’s on the walls. It was that type of environment where you will see in the library people who at rest working on their laptops, drinking coffee or tea and reading. But in this case instead of books this place was like a library that had different and interesting photos. Many of these photos that were taken around the 1900’s had a message that spoke to our lives. For instance, there’s photos that have messages about love, suffering and from what I remember a playful message. In one of the photos that had a message about love, the picture indicated a couple kissing and in the shadows you would see someone holding a child. In the photo about suffering it showed a group of people surround a man who was either hurt or dead on the ground and it seemed as if someone was holding back the persons mom from getting close to the body. The facial expression from these peoples faces were sorrow, devastated and worried.Now when it came to some images that were a playful theme, one of the images showed these kids doing their own thing, either communicating with each other, laughing, playing or just relaxing.

Since this exhibit was about Mexico, the kind of things, places and people in the photographs were first of all the places looked old and wrecked. It seemed as if the people were suffering from poverty and didn’t have a stable home because of how terrible the condition was. The environment seemed crowded in certain places and some weren’t. For the people that were outside from the looks of their faces shows pain as if they’re striving for a better life for themselves and family. To compare life of the people in Mexico to here is that in Mexico it’s more of a rural area and in NY it’s more urban. However, the way Webb’s approach to photographing Mexico is as stated in one of his quotes crowded, vibrant ever changing place, where “no one” becomes a metaphor for the precarious, the chaotic, and the multitudinous.” In other words Mexico had a few violence taking place that effected the environment and the growth of crime and threats which was very tragic.

One photograph that I loved so much was a photo taken by Tijuana Baja California which was a picture of Jesus and certain pictures around him. The reason why I choose this photograph is because the image of Jesus itself is powerful besides the message it’s trying to give. You may ask what so powerful about this picture of Jesus suffering. The  message behind his suffering makes this so powerful because this suffering He went through was for all of us but yet society today don’t think what He did was relevant because we’re so busy focusing on what’s going on in our life which is allowing us to become blind. We’re focusing on what society is offering us instead of what Jesus offered us. Which was His blood. As you can see above Jesus, you see images of Santa clause which represents fairytales or make believe stories, a picture of a girls legs which could represent lust and there’s other photos surrounding Jesus but the point that I’m trying to make is we putting all these things before and above Jesus knowing that He paid a price for us so that we can get a second chance in living life the right way and so that we can be saved from sin. This photo makes me feel disappointed because of the foolish decisions we make in life and it makes me feel disappointed because look how society repays Jesus after everything He has done. Society is just ungrateful from my understanding. 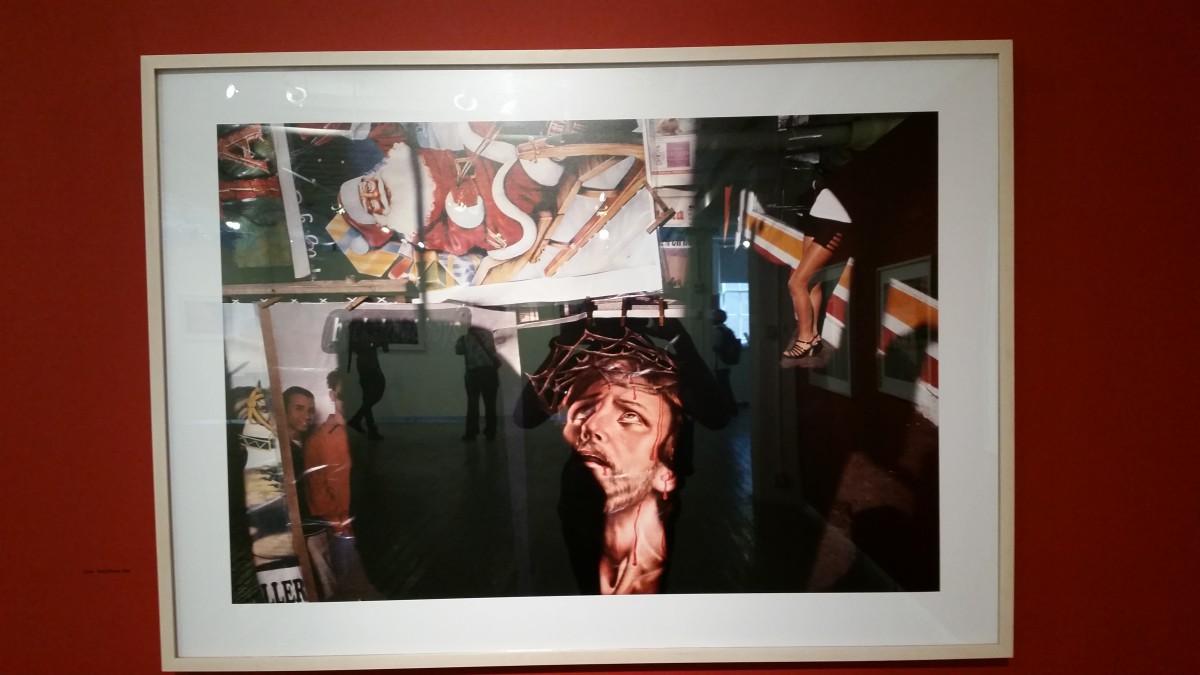 This entry was posted in HW-Exhibit Review. Bookmark the permalink.