In Project 2 Of English 1101 we had to take a 10-15 minute walk passed city tech. Our goal was to use our senses and observe  an overlapping New York. We would post about the location we chose and why did we choose it. Prior to the project we read ” City Limits” by Colson Whitehead and got an idea on how to explain our topics in our writing.One of the goals was to compare and contrast Different and overlapping New Yorks and the people that live there and how they are affected by it. I wrote about the overlap between commercial buildings and personals stores like Groceries or even little apartments far off next to the Brooklyn Bridge. I thoroughly enjoyed getting to know this area more and the type of people who live here. I am new to the busy side of Brooklyn so this project made me feel more welcomed around here.Because I got more familiar, I was enlightened. I was Taught where the nearest Barnes and Noble is located and I learned directions towards different subway stations to lead me to City Tech just in case I am stuck In Traffic, However I think I need more improvement on how I describe my surroundings and senses.But since I have acquired these life skills , I know I have gained something from this adventurous project. The additional support I had was friends and I going through the busy streets and spotting anything of interest to help us along the project and also the reading of City Limits and how a overlapping New York look like. 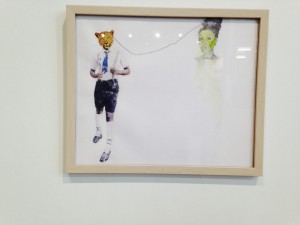 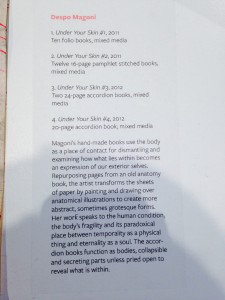 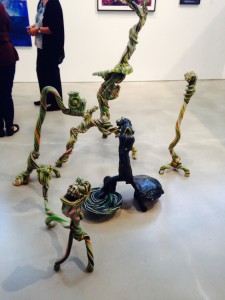 In this field trip we walked down Brooklyn to visit the Bric Museum. This museum had a lot of media art like Music recording and experiment arts.I personally Believe this was the best field trip. The Art work really struck me on a spiritual or inner self kind of way. I took my time around and read a lot and the two works  that stuck out to me was the pictures above. The reason why I like it so much because it shows the struggling journey that people go through in order to find themselves. It conveys that we go through trial and error just to find something that we already have. The sound box that we all tried interests me on how our body functions Mentally and Physically. When one of our senses go down like our sight, the other raises like our sense of hearing. When this happens we become more involved with this sense, and inside the outhouse it was playing sounds of nature  which really relaxed me. I completely understood the Idea of this experiment. I would love to have more trips/ Experiments like this in the future.

The Boston Photographs really peaked my interest because it has a lot to do with morality and ethic views. In Senior year of High School I took a Moral Philosophy class and I believe it helped me further understand what is going on within this Article, because I took this class it led me to believe that this is a Open-ended argument debating if publishing pictures of a women falling to her death is considered a ‘good thing’. Graphic pictures are usually not shown in the newspaper because it can be considered too violent or unpleasant. I sense a type of guilt found in this piece because the Photographer did not expect this to happen and the events resulting from it.This catastrophe resulted in the concerns of ” Life in the ghetto ” stated in page sixty. ” They dramatized the need to check on the safety of fire escapes”.

I believe that the pictures does show a rather unpleasant view but in one way it does make people more alert about fires and safety hazards. It is a mixture of feelings and opinions. One reason to oppose is the privacy of someone who passed away, Family members or friends who rightfully angry would obviously take action and cause more chaos. 1000 words could describe a picture , especially a picture like this. In times today it is also the same issue about our privacy as media and social networks increase. 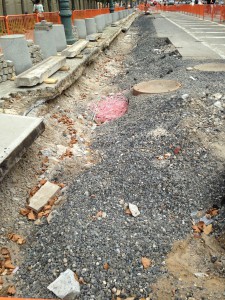 The Location of my Walk is 15 minutes away from City Tech. I began my walk by proceeding left through the crowds. For about 5 minutes through the journey I began to have more space on the sidewalk and I noticed that things seem to be quite less busy. I knew that I was going somewhere different. Soon I came across a park inhabited by lots of chirping birds and a lot of visual greenery. It was more tuned to nature the area i was in, but there was more to the area as I continue to walk down and see that its not all about business and more about stores. There was lots of cafes and food places. I seen a lot of construction like in the photograph above. I thought that this was a perfect example of my goal that i was trying to achieve by observing the everlasting change of New York city. I smelled a lot of Hot dog stands and heard a lot of cars honking and people arguing. I would really like to see this place in the night due to this area being a mixture of busy and relaxed, I wanna see how this certain area in particular fits into the saying of New York being the city that never sleeps.

Our first project in English class was to introduce via openlab. I found this very easy because the main goal was to describe ourselves. We also had to comment on others work to critique them and help them improve it through guidelines. I learned that I can be very detailed when it comes to describing anything.

What I acquired during this class is that this project is a big introduction to the other projects, or this is how I feel this project is meant to be. Also to help us get more acquainted with one another. I am proud on how comfortable I felt when it came to describing who I am and how precise and efficient my advice can be when helping others when it came to setting up their bio and and project overall. One of the things i should work on is how to organize my information better because the reader can be lost if i don’t. I have additional support throughout class time because I learn better through verbal communication. Also at times I would have poor management time due to my other homework and I tend to forget to go on my computer from time to time. For my later project I shall be using my phone more often to operate Openlab. Since now I have my first experience in my first project of English I am now really confident in the future works.