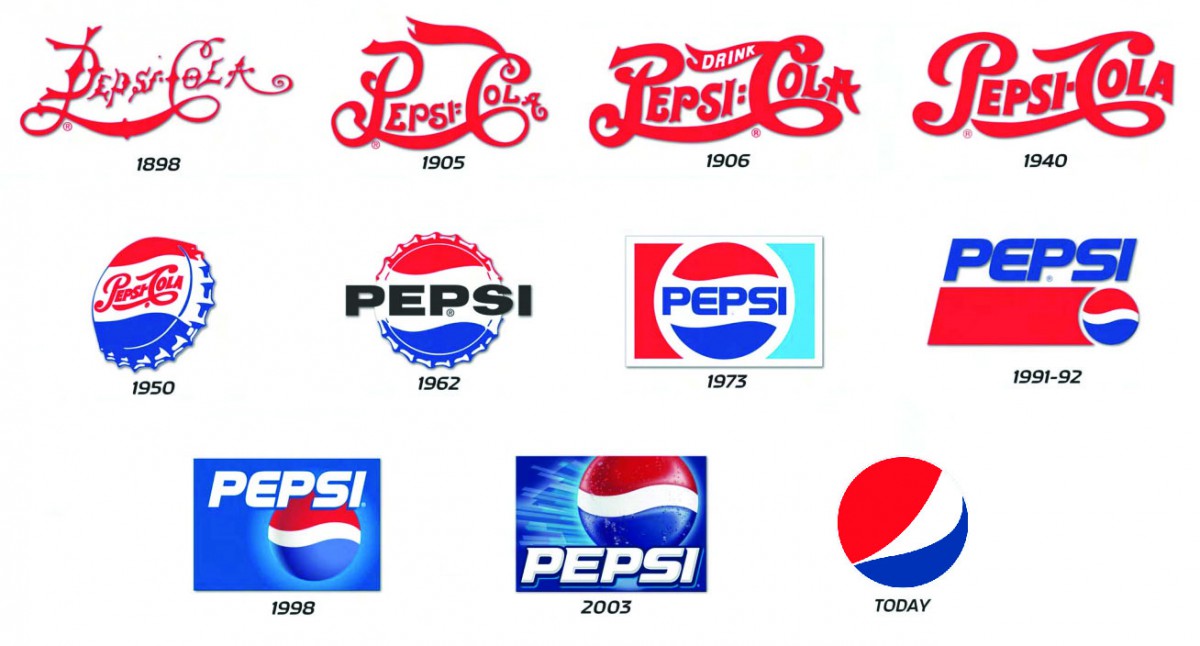 The logo I have chosen is the Pepsi logo. I picked this because Pepsi is a major company in the beverages department. The company was founded in 1898. As you can see above, the logo from 1898 to now, the company made many changes throughout the decades. Even though there is a lot, the concept only has change once. The first four logos had the name of the brand in a curvy horizontal direction. Until the 1950s, is when the concept changed with a ball with a red, white and blue color scheme that we know today while keeping the swirl motion like its predecessor.
Before Pepsi made its way into the market, it was called “Brad’s Drink”. The name was based on the man who made the drink in his house. However, he wanted to reach a broader audience and felt like the name was not as appealing as, what later is called, “Pepsi-Cola”. The name was made to describe the 2 main ingredients of the cola. The 2 main ingredients were Pepsin and kola nuts.
The first logo was made by Caleb Bradham. After the brands renaming, the logo was made and trademarked in 1903. The logo had the name “Pepsi-Cola” in red colored fonts. The style appears with thin type and hard edges. This makes it almost illegible if you were to put it in something small like an 8 fl oz. bottle. While the updated logo in 1905 has no edges and thick type. It would be placed in a light background, in which, makes it very legible with red being a strong color. The thickness in the type helps with that as well. The logo updated a year later with additions. The word “Drink” was added on to the ribbon-like end of the capital C in “Cola”. The logo is slightly wider while still maintaining a mono-red color scheme. This remained to be Pepsi’s logo for a few decades until 1940. The word “Drink” is removed along with the serifs for more simplicity. It was the first logo to rid the serifs that remained ever since the first logo back in 1898. The P and C still have the curves as they did at first. When war was around, Pepsi wanted to contribute with support in a patriotic logo. This is where the red, white and blue colors started to come into play to lead to the logo we know of today. The round shape was to go along with the bottle cap. The copy for the logo remained unchanged. In 1962, the logo removed the word “Cola” completely and replaced all type into san serif to fit in modern times.
For logos ahead, the red, white, and blue globe for Pepsi would represent the brand and stand out from its competitors, such as, Coca-Cola. Coca-Cola is a direct competitor in the cola soda industry. It had big marketing campaigns. One being the “Share-a-Coke” campaign in 2014. Pepsi had many different and small agencies highlighting their brand while using recycled ideas, “Joy of Pepsi”. Another promotion Pepsi has done is for the Chinese at the 2008 Olympics with red cans which represents the Chinese flag. Promotion is important for branding and logos help make it memorable.
Branding is important to make a successful business. What better show of branding from a brand logo? It attracts customers in subconscious ways. It brings attention to other competitors in the same industry. This is what makes companies change or tweek their logos from time and time again. Pepsi is no exception to this. The logos that have tweeks for the first few and then a big change later on makes it so their brand stands out; in this case, Coca-Cola. The color red is used in both of these brands, so it leaves the name being different. Also the cursive style in both logos’ copy are very similar. Visual appeal is important for companies with their brand. It gives the consumers something to remember whenever they buy the product. Pepsi’s logo decision benefited them with standing out from their arch-enemy, Coca-Cola.
Logos make or break brands. It is important to understand what makes your product different from other competitors no matter how marginal. Pepsi has done a decent job, in my opinion, when comes down to that when they added blue into their color palette and the big globe. They no longer appear to be the exact same company to Coca-Cola; like a younger inferior sibling. The campaigns they had throughout the decades helped with that as well. I prefer the Pepsi logo over Coca-Cola’s because the changes made them remarkable different with something so simple as the globe. I also prefer drinking Pepsi over Coca-Cola.

Danesi, Marcel. Why It Sells : Decoding the Meanings of Brand Names, Logos, Ads, and Other Marketing and Advertising Ploys. Lanham: Rowman & Littlefield, 2008. Print.

Zmuda, Natalie. “What Went into the Updated Pepsi Logo; Experts Estimate Cost to Roll out New Look in the Hundreds of Millions.(News).” Advertising Age 79.40 (2008): 6. Web.

Outside the Library Database

Hey there! My name is Mark Criollo. I am in the Communication Design – Graphic Design Major because I have a passion for creative especially in drawing to be more specific. Which is why I believe this module is suitable to my interest. I have also taken some illustration classes on the side throughout my 4 years to sharpen my traditional art. My goal is to graduate my 4 years and then to attend a graduate design program in pursuit of my Masters.