The person that I chose to do my research on is named Irma Stern. She was a painter and sculptor who traveled to Africa. She painted landscapes and people to capture their expression at that moment. Sadly she is no longer with us anymore but, her art will always be there to remind us of someone as inspiring as Irma Stern was. Irma Stern was born on October 2nd, 1894 in Schweizer-Reneke to German Jewish parents. She died on August 23rd, 1966 in Cape Town, South Africa. In her early years, Stern and her family traveled frequently between Berlin, the popular capital of Germany at that time. Stern moved to Berlin to study art during World War 1. She would travel to Africa throughout her life, collecting artifacts and looking for new experiences and subject matter for her paintings. 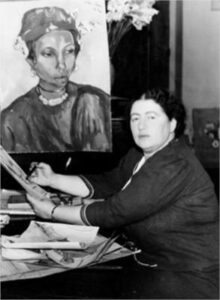 Stern began her formal art studies at the Weimar Academy in 1913 and later moved to Berlin to study under Martin Brandenburg who introduced her to the neo-impressionist techniques and theories. The neo-impressionism technique was used by Georges Seurat, Paul Signac, and their followers’ painting using tiny adjacent dabs of primary colors to create the effect of light. Stern decided to terminate her formal studies in 1916 after Brandenbury rejected ‘The Eternal Child’ – the painting she considered her first independent work. The painting was a picture of a little girl with braided hair, and a red dress with some design on it, the girl looks a little bit sad and weary this makes a little bit sense because it was happening during World War 1, and Stern wanted to capture people’s emotions in her painting. 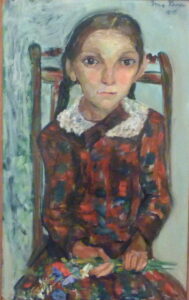 The painting was an image that inspired her to express her emotional response to the suffering and agony of war in her personal style, marking the turning point of her career. In 1916 Stern had her first solo show with the help of German painter Max Pechestein. Irma Stern married Dr. Johannes Prinz, her former tutor, in 1926, and acquired ‘The firs’ ( now the Irma Stern museum ) in 1927. She did other paintings of children and African American people when she was in South Africa. 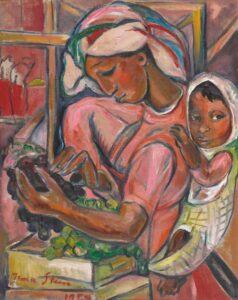 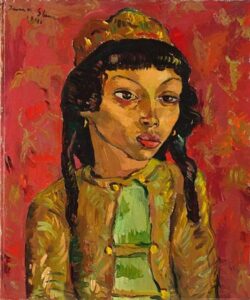 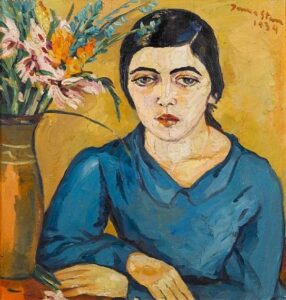 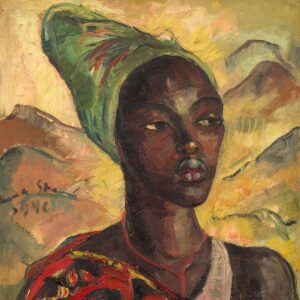 Stern didn’t only paint portraits she also painted landscapes. Each landscape painting shows a scene that tells a story, and it makes you feel like you’re with her at that time she was painting the picture. She still used neo-impressionism to makes landscape paintings. Which does make a pop to the orange in this beach scene. 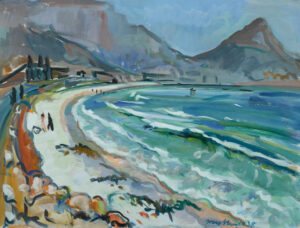 A piece from the Nassau Museum of Art’s Virtual Exhibit “Blue” that I found very interesting was the piece called The Huxley Guide to Switzerland by Christopher Winter. The piece is 35.5×27.5 in which is a very big piece that was created in 2011. He used Acrylic paint on a canvas. In the piece, you can mainly see that he used the color blue and white there were some hints of green and pinks that were used. I chose this piece because I liked how he made the boy and girl look like they were flying over water because under the boy and girl you can see the reflection of their shoes, and you can also see the reflections of the mountains. I feel like the virtual experience would differ from physically going to the museum and experiencing it there for your self because the atmosphere around the painting would be different than visually. 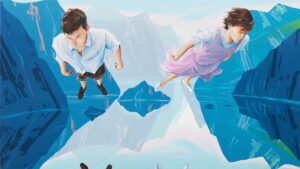 The next piece I chose from the museum is by Landon Metz. The art piece doesn’t have a name. It is a painting, dye on canvas in two parts. The size of the painting is 50×40 in. I chose this piece because it looks like the painting can go on forever and it would take a long time to copy exactly the same lines on two different canvases which shows that he probably took a long time to finish this painting. I also don’t see many people use a navy blue and white color on a piece much, we mostly see blue or light blue so this painting was a bit different. 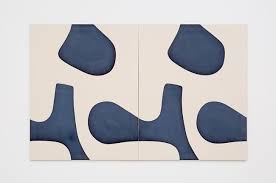 Last but not least the final piece that I chose was Hiroshige Fine Evening on the Coast woodblock (Prussian blue, 1830). It is 14 1/2x 9 ¾ in. I chose this piece because it reminds me so much of painting I see around my parent’s friend’s house where they have many of these types of pieces hanging around their walls. Some have mountains and others are of flowers and animals with Asian writing on the side. I choose this piece because it gave me familiarity. 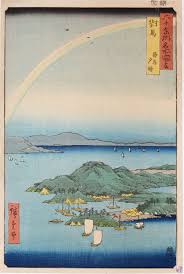 1) The first quote I got inspiration from the song “You don’t know how it feels” by Tom Petty. Where when he was driving down the road the billboards passes by with lyrics so I decided to mimic it. 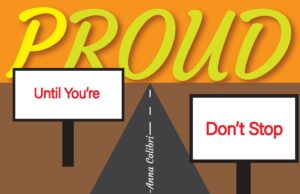 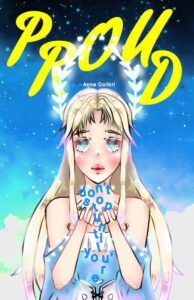 3) The third one I tried to make it seem like the word “proud” is an obstacle and the other words are trying to get through it, and the “until you’re” is still going which means they know that they can do better. 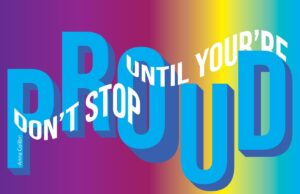 For our class trip, we went to the Brooklyn Museum and visited JR Chronicles as one of the exhibits. JR’s exhibit took up all of the first floor of the museum. That ran across the walls where you may have broken your neck from looking up because his work ran from average height all the way to the second floor. Many of JR’s work is people’s work as in you, your self is the artist, and you take the photos all JR is going to do is print them out large and have them placed all over the place. JR also put other photos together into one enormous photo that looks like he took it in one go.

One of the displays that caught my attention was a video that JR put together. Where he recorded many people protesting for their beliefs, and he put them to 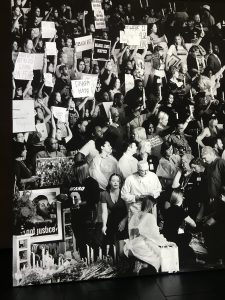 gether in one big video and in slow-motion. Which seems like they all were there at the same time doing this. But when JR showed us the process he took to make this big picture. It just fascinated me. How he was able to take multiple people and take many photos of them, then putting it all together seems like they were all there at once doing it. This is just amazing, and it just makes you stand there looking at everyone’s reactions.

When I was walking through JR’s work and seeing what he does. Bring his work to life and being surrounded by wall to wall with his work. It made me feel as though I was also part of his work too. That we all are important none of us should be left out. We all have a voice that will be heard. Also seeing that anyone can be an artist/photographer just go out there and make art. Being able to see JR’s work it lightens up anyone to be able to do something to make a change and to let others know issues that the world has.

This is a video that I created for fun. It is images of my character on a game but I also took a song and wrote out the lyrics to the song. As the lyrics pop up on the screen there is both movement on the lyrics and the images. Please click on the link below if you’re interested in the video! 😀 Enjoy your time there 😀 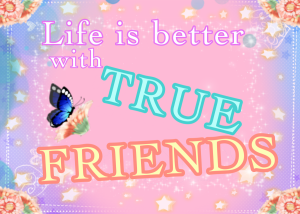 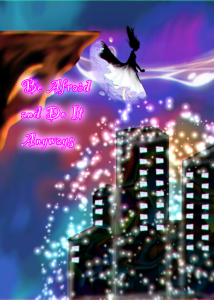 Hello! I am a very shy girl who doesn’t talk that much unless spoken to. I love to draw that is how I express myself. I usually draw anime