Prof. Renata Ferdinand, Coordinator of the Literature Roundtable, has just announced the reading for next semester. It’s Intimate Apparel, a play by Brooklyn-based author Lynn Nottage. You can purchase the play, or read it as an ebook from our college library.

Want to know a little about the play before you read it? Prof. Ferdinand shared this information about it:

“This haunting and hilarious play is the most fulfilling event of the season.” – New York Post

“The language of Intimate Apparel is a thing of beauty, at times approaching poetry…The play is a story about citizens grabbing for the same crust of bread, occasionally pulling nourishment from one another’s mouths. It is a parable about sweet dreams and honeyed words that, in an instant, can turn sour.” —Los Angeles Times

THE STORY: The time is 1905, the place New York City, where Esther, a black seamstress, lives in a boarding house for women and sews intimate apparel for clients who range from wealthy white patrons to prostitutes. Her skills and discretion are much in demand, and she has managed to stuff a goodly sum of money into her quilt over the years. One by one, the other denizens of the boarding house marry and move away, but Esther remains, lonely and longing for a husband and a future. Her plan is to find the right man and use the money she’s saved to open a beauty parlor where black women will be treated as royally as the white women she sews for. By way of a mutual acquaintance, she begins to receive beautiful letters from a lonesome Caribbean man named George who is working on the Panama Canal. Being illiterate, Esther has one of her patrons respond to the letters, and over time the correspondence becomes increasingly intimate until George persuades her that they should marry, sight unseen. Meanwhile, Esther’s heart seems to lie with the Hasidic shopkeeper from whom she buys cloth, and his heart with her, but the impossibility of the match is obvious to them both, and Esther consents to marry George. When George arrives in New York, however, he turns out not to be the man his letters painted him to be, and he absconds with Esther’s savings, frittering it away on whores and liquor. Deeply wounded by the betrayal, but somehow unbroken, Esther returns to the boarding house determined to use her gifted hands and her sewing machine to refashion her dreams and make them anew from the whole cloth of her life’s experiences.

The date for the roundtable hasn’t been announced yet, but Prof. Ferdinand is planning to have the event coincide with Women’s History Month, so expect it to be in March.

Planning to attend? Why not grab lunch and support City Tech students on your way?! Please read this message from Louisa Garcia, Vice President of the Art Directors Club: 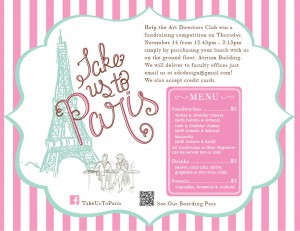 The Art Directors Club will need your help this Thursday, November 14 from 12:45pm – 2:15pm. As most of you know, we are a design club at City Tech that releases the magazine publication, Command + J, as well as host the Meet the PROS speaker series, which features professionals from the design, advertising and illustration field. We have been fundraising diligently for a trip to Paris next April for one week during our spring break.

The Student Government Association has decided to host a fundraising competition and the club that raises the most money between 12:45pm – 2:15pm will win a cash prize of $500. We could really use that money towards our trip because bake selling twice weekly amounts to only about half that cash prize.Here’s how you can help:
We ask that you purchase your lunch with us that day on the Ground Floor of the Atrium Building. If you cannot come to us, we can come to you, just email us at: adcdesignclub@gmail.com, give us your order and we will deliver it to your office.
We even accept credit cards!
Le Menu
~Sandwiches~
Turkey & Cheese (with lettuce & tomato) on a mini-baguette $5
Ham & Cheese (with lettuce & tomato) on a mini-baguette $5
Mozzarella (with basil & tomato) on a mini-baguette $5
All sandwiches can be served either hot or cold
~Sweets~
Cupcakes $1
Brownies $1
Cookies $1
~Drinks~
Bottle of Water $1
Can of Coca Cola $1
Can of Sprite $1
Can of Diet Coca Cola $1
Can of Ginger-ale $1
If you have a special request for a sandwich, let us know the day before and we will prepare it specially for you.
Thank you all so very much.
Best,
Louisa
Louisa Garcia
Vice President
ADC@citytech 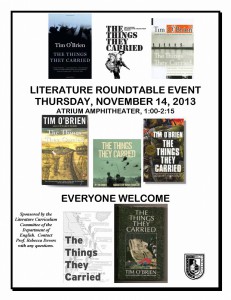 The English Department and the Literature Curriculum Committee invite you to join the conversation about Tim O’Brien’s The Things They Carried this Thursday during Club Hours in the Atrium Amphitheater.