On September 19, we watched a documentary in the class. The name of the film is My Brooklyn, directed by Kelly Anderson and produced by Allison Lirish Dean. This movie mainly focuses on sensitive study of gentrification and how it affected the people negatively. In this blog I will discuss what I felt watching the film and why I think gentrification/zoning is not the bad guy.

The story begins when Anderson moves to Brooklyn straight out of college following her dream of becoming a filmmaker in the 1980’s. She initially came to the place attracted by its cheap rents and diverse culture. But after Bloomberg held the office in 2001, a massive speculative real estate boom was noticed, that was rapidly altering the neighborhoods she called home. From six stories buildings, construction of thirty stories buildings had started. The film shows the rising conflict over the entry of the chain stores and loss of community values. But the real conflict becomes prominent when development officials announce a controversial plan to tear down and remake the Fulton Mall, popular and bustling African-American commercial district near Anderson’s apartment. As the local debate over the Mall’s future intensifies, deep racial divides in the way people view neighborhood change become apparent. All of this pushes Anderson to confront her own role in the process of gentrification, and to investigate the forces behind it more deeply. She thought she was a “gentrifier” because she was a highly educated white woman. I really found this idea a little weird. I found this weird because she was also suffering the same way the other residents of the community were. She was also pushed out of the neighborhood because of rising rents. I think this idea of hers is inspired by the stereotypical concept of white being rich and blacks being poor.

Although she considers herself one of the reasons behind gentrification, I think the main forces behind it were the private corporations in collusion with the city officials. Zoning (Zoning is the way the governments control the physical development of land and the kinds of uses to which each individual property may be put) is not essentially the villain. Zoning laws typically specify the areas in which residential, industrial, recreational or commercial activities may take place. But it might seem to play the role of a culprit when “Follow the money” becomes the priority and the city officials treat the government as a private corporation, the residents as clients and the city itself as a product that needs to be advertised and marketed (as if the city was a new Iphone X!) However, if the developers are making the luxurious buildings and making profit out of it, then that means there are people who are actually buying those posh condos. There is the supply because there is a demand. People are buying these apartments because of course they have money; but more so because that is the new trend. It probably would look “cool” if you could afford to live in that apartment. It’s like you have an iPhone 6 but you want the brand new iphone X, not because your phone doesn’t suffice your needs, but because it’s cool to try a new thing! This is the part from the richer side, but the rest of the community either is forced to move out or upgrade their style of living as well. Like it or not, they are trapped in the gentrification bubble.

Some of the issues raised through this film are: affordable housing, commercial district, zoning, gentrification and displacement, commercial district, redlining, public-private partnerships and dealing with the problems by community activism. Although these concepts are very complicated and overlapping, the director does a brilliant job by the graphical presentation of how the Downtown Brooklyn was planned.

After watching the film and trying to analyze the whole procedure, I think there are certain tools that an individual/community should deploy to address the gentrification issue. Tools like making stricter rent laws, encouraging affordable housing, playing ahead of the game by planning well, getting involved with the local politics and demanding for more transparency of development procedures and mostly by strengthening the community through education. And this is where I think FUREE needs to be mentioned and appreciated. Once we have a strong and united community, a responsible government representative (who will represent the people not the corporation) and hopefully a more humane developer, a balanced gentrification might be attainable.

[Even after finishing the blog, I still wonder where did Mr. Jeff  Garguilo, the owner of the Bagel Guys go?] 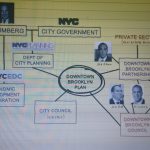