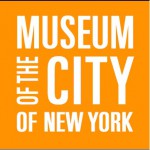 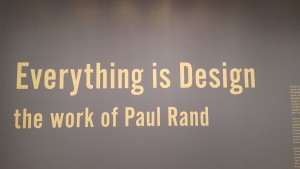 “The grand finale of the exhibition Everything Is Design: The Work of Paul Rand,with designer Kyle Cooper, known as “the Da Vinci of movie title sequences,” shared what he learned from Paul Rand when he was his student at Yale University. The event was held at the The Museum of the City of New York.”

The exhibition itself features more than 150 advertisements, posters, corporate brochures, and books by this master of American design.

This was an event I just could not pass up. Paul Rand is one of my favorite graphic designers. I love the fact that he was able to take the ordinary and make it noteworthy and memorable. He basically changed our perception of “ordinary”. His designs are timeless. The source of this effect lies in the simplicity of his designs. It supports their timelessness and makes them still look fresh.

At the Closing Party, Kyle Cooper spoke about the influence Paul Rand had on him in his work. He is a well-known designer of motion picture title sequences. As he spoke, he showed clips of movie sequences he designed such as:

He spoke about the use of simple symbols and shapes in his works were inspired by his Yale Prof, Paul Rand; his style and simplicity in his designs. Also, his strategy and design thought when creating a film sequence. Like most designers, he makes sketches and interpret those sketches in Photoshop where he changes into storyboards to move to animation.

This was a great experience, since I was not familiar with Kyle Cooper but have definitely seen his work. Hearing his design techniques and how he comes up with his designs for sequences with the influence of Paul Rand was very interesting and taught me a different way to look at designs.

After the talk with Kyle Cooper, there was a reception and opening to the exhibition to the works of Paul Rand. The exhibit is organized into five sections beginning with his Early Life and Career, moving on to Madison Avenue and Books and Publications. The largest section; Creating Corporate America and ends with his Writing and Teaching. 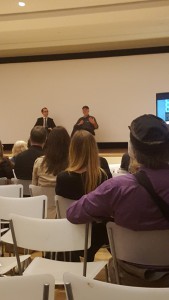 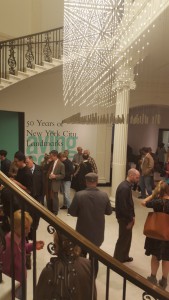 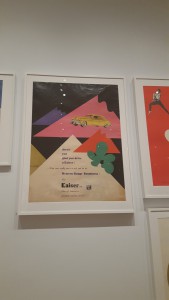 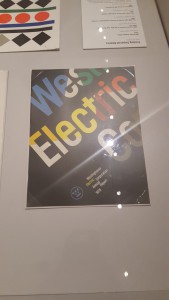 My favorite part of the exhibition was the corporate America, displaying all the timeless logos and branding we are all familiar with today that are decades old but still make an impact and remain unique to this day.

Paul Rand merged text with images, photographs and line-drawings, collages and artwork, which is why I became attracted to his work the most. I relate to this because I see myself creating in the same way, using photography, artwork and design together as one element. His unique style was like his signature, you can always tell a Paul Rand’s design from any other. It separated him from other designers, which is what makes him such an influential icon. What every designer aims to be. Rand’s designs were simply meaningful.

Networking is always important, but what makes it more of a valued and inspirational experience is when you are actually interested in the specific event you are attending. For someone like myself, who is generally shy, it makes it a lot easier to connect with other people who share the same interests. At this event, I was able to connect and switch business cards with a few designers, some of which were students by just engaging in conversations about Rand’s style and Kyle Coopers’ presentation  throughout the exhibition. 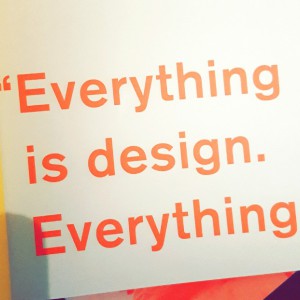