Museum of the City of New York.

Today me and my class went on a field trip to the museum of the city of New York. Some of us went into different exhibits while some others went by themselves to some others.

One of the first things that caught my eye when I went up to the third floor of the museum was the display of populations by race in New York back then. I love learning about different kinds of lore including a lot of lore of New York City and what it was like years ago. The exhibit was called WHO WE ARE: Visualizing New York City by the numbers and it showed interesting visuals, high amounts of data and keys about the inhabitants of New Yorkers. I found this interesting because even back then, there were a lot of people who came from around the world to live in New York such as Asians, Africans, etc. I like to compare back then to now of how we have a big variety in race living in New York. 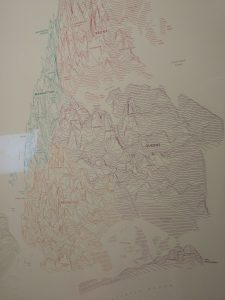 There was an exhibit that also caught my eye when I went to the second floor. The exhibit was mainly about women’s suffrage and which women back in the 1900s couldn’t really do much things or couldn’t afford many things. These were the events that led to each fight after fight in the Civil Rights movement. Causing strikes and chaos in the streets of New York, this was all to lift segregation and make every one including the women equal and have well paying jobs  other rights. 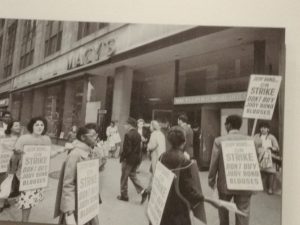 Aaron Douglas was born in Topeka, Kansas on May 26, 1899. He is known for being an African American painter and graphic designer who played a very important role in the Harlem Renaissance of the 1920s and 1930s. He got his education at Topeka High School and the University of Nebraska then started his career in being an illustrator and designer. He first started teaching at Fisk University and he stayed there for 27 years.

Arriving in Harlem in 1925, Douglas quickly became aware and immersed in Harlem’s cultural life. He contributed into making illustrations to the National Urban League’s magazine, and the Crisis that occurred in the time period. A lot of Harlem Renaissance writers prompted requests from him which made him grow in popularity back then. He received his first major commission and that was to illustrate Alain LeRoy Locke’s book, “The New Negro”. He is sometimes referred to as “the father of black American art.”

In 1926, Aaron Douglas married a teacher named Alta Sawyer who was a teacher. The two of them met in 1917 but Sawyer was with somebody else. The couple’s Harlem home became a social Mecca 4 famous people like Langston Hughes and W.E.B Du Bois, along with other powerful African Americans of the early 1900s.

Aaron Douglas was known for creating some of the most exquisite pieces of art you can ever find around. In 1930, he was hired to create a moral for the library at the University he taught. In 1933, Douglas had his first art show and soon after, started his legendary works. It was a series of morals entitled “Aspects of Negro Life” that featured four panels. Each of those panels were depicting the struggles and successes of African American experience. Each Morrow included a mix of Douglass’s influences such as jazz music to abstract art.

in the late 1930s, Douglas return the Fisk University to be an assistant professor and founded the school’s art department. he took his educational responsibilities seriously when he enrolled at Columbia University’s Teachers College in 1941.he spent three years earning a master’s degree in art education and establish the Carl Van Vechten gallery at Fisk and collected some interesting works for his collection. Douglas remain committed to growing and improving as an artist. he received a fellowship from the Julius Rosenwald foundation in 1938, which funded his painting trip to Haiti and several other islands in the Caribbean. Aaron Douglas was and will be known as “The Hero of Harlem”.

This is the interview I had with Salome Mumford. I asked her questions about her life and mostly her journey to coming here.

I just watched Alfred Hitchcock’s North by Northside and I have to say, it’s not that bad. The music was engaging but that’s not the focus here. Hitchcock keeps the title sequence simple and pretty much monotonous. But the real kicker is that is he used text from perspective.  I believe it makes everything interesting and makes us look forward to the film.

My neighborhood may not be the most exciting in the world.  It’s immensely quiet, sometimes in the afternoon kids would go and play basketball and hang out, and parents will just take their kids to the park that’s in our neighborhood and play with them all day after they have come home from work and their children have come from school. You do have to have fun after all. Even better, there are delis all around and a hospital near by. Many people would call it a projects. I for one, will call it a projects as well. A quiet one in fact. Which leads to the type of text I see all around from the places I’ve mentioned.

There are some texts that you see here, for example, this Hospital sign of Ronald Brown. This gives off a vibe of San serif which is one of the most boring Styles up-to-date but interesting at the same time. Mostly clever for some aspects of it.