Under Shadow, Under Moon

Charcoal, sanguine, and white conte crayon on standard letter size printing paper. Coated with workable fixative finish. Dialog from J.R.R. Tolkien’s The Lord of The Rings: Book Three: Return of The King.  During the period this piece was created, the artist was in solitude and became inspired by Norse vikings.

The artist’s poem, and composition, was inspired by the works of Tom Phillips, maker of the Humument, a reinvented book in which all of its pages have been worked over into pieces of art. Phillips created many different poems, messages and sometimes no text was left on the page. The artist used Tolkien’s works as an escape from a reality he called life. He found himself immersed in worlds completely unknown and bewildering to him. Getting lost in these worlds seemed, to the artist, as a way to forget and escape the harsh conditions his world seemed to keep throwing at him. By letting himself emerge into different worlds, he was able to read about and experience, not only hardship, but being able to overcome and accept fate. The artist at the time also was interested in the old traditions of the Norse vikings and their songs of troubled times, that were always sung generation after another. These songs of leaving home, never to return, without a map and without fear really made the artist inspired by their bravery as a race and as a people.

The artist had his assistant print multiple copies of a page from J.R.R Tolkien’s The Lord of The Rings: Book Three: Return of The King and began to outline the poem using scattered words throughout the text. He experimented using different mediums that bound well on the paper. The artist began by using hue in the form of gouche paint, and as well as water color and prismacolor colored pencils. He tried to focus on high or low intensity but soon realized the poem he created was not vibrant and bright in mood. The poem had a darker, deeper tone to it. The artist felt as if the piece needed less hue and more value. He turned over to charcoal to represent these different values in the grey scale. The filling of the paper, using only a stick of charcoal, was a time consuming process and the artist used several different copies of the text trying to get the results that satisfied the poem he outlined previously. This was a very tedious and time consuming effort. He then began to use charcoal to fill in the majority spaces and used a paper bound pointed blending tool to evenly distribute the charcoal along the surface. Then using lines from the poem, he created imagery such as the mountains alongside the moon and the the corpse of a viking in white and sanguine conte crayon. The artist finished the piece by using a spray workable fixative to adhere the charcoal and conte crayons to the letter paper.

The artist’s mindset at the time the composition was created was a very dark one. He was disconnected from the outside world, stuck in his own problems. Friends of the artist might have called him an introvert. This piece was meant to show and display the relationship between what the population sees as real and relevant to itself, and only to itself, and what really happens outside their lives as well as regret. The artist intended to bring light to the fact that regardless of how bad things are going for you, the world won’t stop turning. Most people dwell on their past misfortunes, some even for years, and never get over whatever they did… or didn’t do. That was also the artist’s intention, to show that regrets amount up to nothing because the world outside them will just keep on going. The poem was made short, because things in life shouldn’t be over analyzed, nor should anyone have to read something so long for a point to be made that is so simple.

This project was a very interesting one. I found myself revising my poem multiple times, cutting it down and even starting new ones from scratch. I was amazed by how many different feelings and emotions could be derived and displayed differently on one page using all the same words. I spent about 3-4 hours the first day actually doing the humument work and a few days later about 2 hours typing everything up. I believe that my strong suit was my perseverance through it all. There were many times where I’d get frustrated trying to get a certain outcome from the paper and medium I used and just wanted to give up, but I didn’t and I ended up being very proud and happy with the outcome of my composition. Music helped alot this time around, I usually find it to be a distraction but I felt really peaceful and relaxed when I sat down to paint/color/blend. I wish throughout the semester that the projects were more like this one because I enjoyed this level of discretion and being able to express how I felt in a productive way.

The route I established is a guide from the city tech campus to the Borough Hall station. The route focuses on a quiet, less populated path through downtown Brooklyn. The aesthetics of the walk touched on natural and man made beauty. It conveniently passes by more than one metro station for those who take different lines. Walking this route is about fifteen to twenty minutes total, making it about five to ten minutes longer of travel time to the train. To begin your route, start at the Jay street entrance/exit in the Namm Building. You will make a left turn right after you leave the Namm Building towards the Vorheese Building. This building adorns a large City Tech logo and the entire front face of the building is made of glass similar to a greenhouse. You will keep walking next to the highway until you will reach Sands Street, and then you will turn left on to Adams Street. This is where the view of the famous Brooklyn Bridge and lower Manhattan cityscape is able to be seen just beyond a small construction yard. There will be a round corner that turns into High Street. This is where the High Street subway station is where you can catch the A,C, or E train. Immediately to your left, there will be NYC Housing development buildings that surround a small lawn with a lush garden that reflects fall’s red and orange colors.  You will continue walking straight down until reaching Tillary Street back towards the Namm Building. Continue past the school book store and stop at the corner. Cross right on Tech Place, towards Columbus Park. Walk straight past the old Post Office, that contrasts against all the other court buildings with its tall, gray castle like features. Continue forward until you reach Cadman Plaza, turn left,  and walk through Columbus Park. There will be a large statue of Christopher Columbus standing on a tall pedestal. Surrounding the statue on both sides are benches spanning the whole park. This is where the farmers market usually is as well as the holiday market when the seasons come around. Continue straight down the park and you will reach the Borough Hall station thus concluding the walk 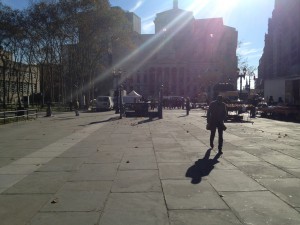 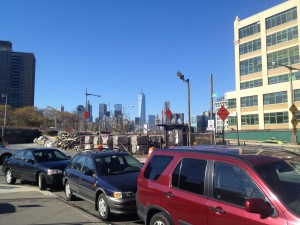 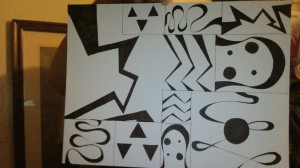 Took about 2 hours to complete 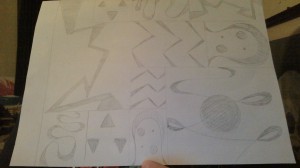 I had a really fun time putting the different patterns together. This is the one I’ve decided to use.

Taking a look out my window, I see nothing but the tops of scaffolding and the broken limbs of dying trees. It’s very hard to get a good perspective on what’s outside, when there’s only a dull ocean of blue paint with the wood shining out from the chips in the poor coat. It’s an awkward position, being low enough that all you can see is the tops of scaffolding, but high enough so the window isn’t covered by the sides of them. I see windows, from the opposing building as well as from the hospital across the street. the windows are bare, mostly, and give off all different types of light. I can see the terraces of far off neighbors, and the AC units of households trying to stay cool. The leaves and bark litter the top of the scaffolding like debris after a bad storm. The occasional animal scurries along, or flies by, but I haven’t seen human foot traffic in a long time. The sky above me is dark.. I work late and I’m up early.. I don’t get the chance to see a great sunrise or sunset. I’m working on thumbnails, but so far have scrapped a lot of potential ideas. Everything in the view from my window is all the same, generic. I’m hoping to find a new perspective, maybe from a different window – away from home.