William C. Durant, the Co-owner of Chevrolet, a car company that sold many cars with a logo in a shape of a bowtie. The Chevrolet logo was in 1913 by William C. Durant. There were many different opinions about the location of where the bowtie logo originated from. One of many assumptions was that the idea of the logo originally came from William C. Durant reading a newspaper when he was on vacation taking place in Virginia. Another assumption that was made about where the logo originated from was from a hotel in Paris. Many thought that Durant the Co-founder of the Chevrolet company got his idea from a design of a wallpaper in the hotel he was staying at.

The image to the left shows the comparison of both logo designs. Whereas the top part is where he really got the bowtie idea from. He saw the design on the wallpapers on the walls of a french hotel and thought it’d be a fascinating idea to use as a design for a car. That was the start of how the Chevy logo came to be. Chevrolet’s logo had many changes throughout the course of 100 years. But one thing that stayed consistent was the shape of the logo which remained a bowtie. There were a total of 10 logo designs for Chevy which meant that they changed their logo design 9 times. After the first logo has been introduced 23 years after Chevy had a new design for their trucks. 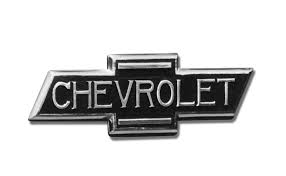