I was really excited to get to working at Mission Magazine, it’s a small fashion media brand in downtown Manhattan run out of the owner’s house, it’s a nonprofit and the company works by putting out online articles and a electronic as well as print magazine every 6 months, with each issue being a different topic then the last, the most recent is titled “Youth”. The company seems to mainly service Europe and America, but I can’t say specifically what the clientele is. Within the company I work as a graphic designer with several others, one who I work along with in my day-to-day, with three others who though with the company work on alternate days.

In an article by Coveteur (Coveteur.com/2017/08/10/karina-givargisoff-founder-mission-magazine/) they go over words which the founder likes to describe the company such as “disruptive” and explains why she went to start the company, specifically that after traumatic deaths in her family she started to reevaluate her life, so she decided to do something more meaningful to herself, “What can I do that’s different?” A second website (wwd.com/business-news/media/mission-fashions-philanthropic-digitally-interactive-magazine-readies-for-launch-10925219/) goes at it from a more product-based angle, where it summarizes what can be found in the first issue, several embedded videos, articles such as the first autistic character on Sesame Street, and pulling some pictures from the article, both articles are from 2017. 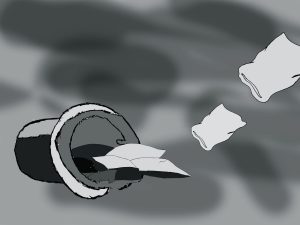 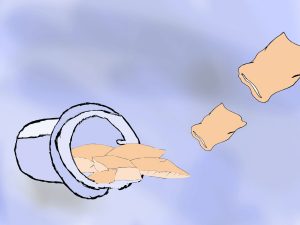 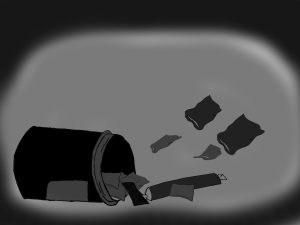 The Greatest Movie Ever Sold is a documentary that revolves around the advertising realm that invisibly pupeteers the world, placing ads on a building, making your favorite hero drive a specific car, so on, it went into some philosophical questions and showed its dangers as well as its strengths, but overall seemed to be about informing the viewer on its impact. The message of the movie by the end of it seemed to be something like, be aware of ads, or “do you want this?”

One area that the movie covered was a Brand’s personality. A brand’s personality is the way that it attempts to come off to the consumer, Nike’s might be ambitious for its emphasis on never giving up and following one’s passion for instance. My brand identity might be seen as Creative yet organized, since I enjoy coming up with different ways to present and do things, but within certain parameters. Brands that have the same personality might be Starbucks, Microsoft, Facebook, Penguin Random House, HarperCollins. and so on.

They used a lot of terminology that doesn’t normally come up either, for example Brand Collateral, which is how a brand is promoted, Co-Promotion, where two brands work together to advertise each other, Sell-Out, which isn’t really an industry term but seems to mean damaging one’s own Brand Identity by becoming more commercial for the sake of popularity, as opposed to Buying-In, which does the same thing without damaging one’s Brand Identity.

One of the things I learned from this movie was the importance of knowing who you want to market yourself to, and what you want to convey to others, it’s the kind of thing that was very important to the brands in the film. Another thing I learned was how important persistence and safety was, in the begining when he was still seen as dangerous or a wild card he got no calls back, but, through persistence he made some break-throughs and as brands saw him as a safe bet, things blew up. The most useful to me though, was the prevalence of ads that I got to learn through his movie, when researchers began to appear talking about how they influence us to buy things.

On the first day of class I remember going through the video with Chip Kidd and learning about the value of doodling, both were very interesting for me. Back in elementary school we used to constantly doodle, we would draw animals or people, and to stop that we had to keep that kind of thing to the arts and crafts class, so that all we did in our other class was simply answer questions and write. Certainly learned a lot, but it gets me thinking, how would I have learned if there was a non-ruled notebook in which I could draw whatever I want?

It’s the kind of free-thinking note-taking that Chip Kidd seems to do with his cover designs, he walked around his apartment block and found the interior designs inspiring for his books, thinking on the fly and then fleshing them out to become something useful. You wouldn’t expect such a high-profile designer to take inspiration from such lowly things, a horizon maybe, or a famous painting, but the elevator?

I remember this was what struck me in that first class and what remained true in each class. Designers are people like me, they doodle, they have artist’s block, they have people that shoot down what they think are great ideas. It doesn’t matter whether they get paid six or two or one figure they never stop being human, and I found that a little inspiring, learning the humanity of these designers that can seem otherworldly with their insane portfolios.

Asking her questions about the field was enlightening, I’d already decided I wanted to work in print but I always think in the back of my mind that I’ll have a professor look at me, give me a funny look, and tell me I’m insane for working in a dying or dead industry, that I’ll never make money by it. It was nice to hear her weigh both sides, the industry wasn’t as strong as before, it was changing, but progress could be made and no field ever really dies. This is one of the reasons that I grew to really enjoy this class, it’s directly useful, not a foray into various projects that I’ll never look back on, it gets to my field and my career, which if I’m smart, will stick with me.

Trendsetters are all around us and are constantly shaping the world. I can’t help but think about all the people that work in fashion spending months coming up with the best new dress for shirt for the runway before a dozen other people try to make their own version. It’s an organic way for any industry to change, ideas inspiring others for it to grow ns change for however long it lasts.

Speaking of the designers that had become Trendsetters in class reminded me of the writer of Frankenstein Mary Shelley, it’s said she really kick started Science-Fiction as a genre, her book being a warning many would say, to the limits of science, and it is true that until recently much of Science-Fiction ends up boiling down to a warning, like 2001 A Space Odyssey or maybe even Passengers. I’m a fan of Science Fiction so it’s the first thing that came to mind for me.

Design wise, there’s a trend that few people talk about,and those are the designs and trends that go on in the world of lettering, before there was the mountain of sans-serif typefaces we have today, we had serif, but that changed when Helvetica came into the picture in 1957  created by the Haas type foundry, when it came out it was the first time people had seen a typeface so clean and simple, most type was geared towards evoking emotion but Helvetica was simple and professional, advertising changed with a now infamous that showcased a photograph featuring a glass of coke with works to the side, a simple ad in today’s standards that in those days shook the  landscape since it was mostly a lot of type and colorful paintings that were done.

Learning about everything we did in class, like the body harm done in order to make striking ads, and how the featured designer kept himself from following trends or having a style in order to be more inventive, taught me that there’s always value in spreading one’s skills and  trying styles, rather then becoming complacent.

I’m a graphic designer and typographer, studying in Communication Design with a focus on Graphic Design.