Since I enjoyed the field trip to the Daily News Offices, attending their Innovation Lab event felt like the natural choice. While the building tour was nice, it was the way that Paul Kim presented his creative team and answered our questions that impressed me the most. He was welcoming, but also honest about the industry of graphic design along with dispelling various assumptions we might have had. The CUNY 100 discount code was the definitely the icing on the cake, so at that point I knew I had to attend. 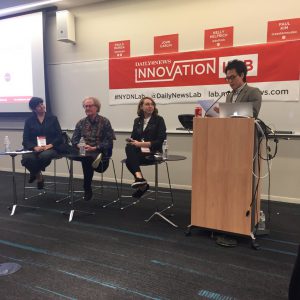 On my way, one of the first things I loved was the fact that the Microsoft building was across from the E train station. The receptionists and security downstairs was extra cordial and the elevators were clean to a superior degree. “Imagine landing a job here? I’d love to work here”, I quietly thought to myself. When I got to the reception lobby, I was greeted to all types refreshments, plush furniture, and various people conversing. The beautiful city view before us completed the package. I immediately sought out familiar faces from the class and began conversations of my own. While we were waiting for the panel portion to begin, I realized that I should be networking with other individuals. A young lady sat down next to me and like out of a movie scene, she surprisingly initiated conversation first about 5 minutes later.

Her name was Ms. Redd and I was delighted to find out that she also majors in graphic design with a focus on illustration. During our conversation we both spoke about our experiences in the world of graphic design along with why we attended today’s event. We had a lot in common, including our love of these ice cold, Brooklyn Brewery IPAs that were available. One of the Daily News staff approached us that the panel portion would begin in 5 minutes. We exchanged contact info and then made our way to the conference room. 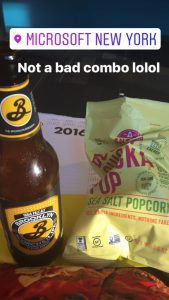 The conference room wasn’t as plush as the reception room, but decent nonetheless. There were about 100 people in attendance along with various Daily News staff, some of which I recognized from our previous field trip. The panel consisted of Kelly Helfrich, John Carlin and Paula Murgia. While the panel lacked people of color, the presence of Kelly and Paula ensured that the discussion wouldn’t only feature a male perspective. Throughout the discussion I took a great deal of notes along with listening attentively for gold nuggets of wisdom. Although I heard a lot of familiar information and opinions being shared, three profound points were made that stood out to me.

The first point came from Kelly and she addressed how everything has become too quick, too simple in today’s technological landscape. Having so much information at the tips of our fingers along with everyone being able to express their opinions anonymously, lead to a new generation where attention spans are lower and products less appreciated. So much is consumed and quickly disposed of, which can be frustrating when one considers the amount of design that goes into these products. This applies especially in the realm of social media and mobile apps.

The second point was from John and he spoke on how wireframes lead to the rapid multiplication of web content. Although wireframes are now considered an industry norm, John recalls a time when many were resistant and skeptical to this new medium. However once wireframes caught on, the amount of content being created for the Internet skyrocketed. This also obviously paved the way for the smart phone revolution and all the seemingly endless apps accessible to consumers. It’s funny how critics sneered at the telephone and considered it to be no more than a toy, but little did they know how it would revolutionize the world. Although wireframes and the telephone are completely different, it’s interesting to see how something can go from being a subject of skepticism to an eventual necessity.

The third point presented by Paula regarding the ethics of design was accompanied by a detailed info graphic. At the center of the graphic is commercial arts and surrounding it are various design spectrums. Paula spoke on how designers are traditionally trained on whether or not a design is powerful, but the ethics of design is a “slippery slope” that constantly needs to be checked. This also related back to Paul Kim’s opening statistic that since the election, fake news syndication has tripled, while mainstream media has split in half. 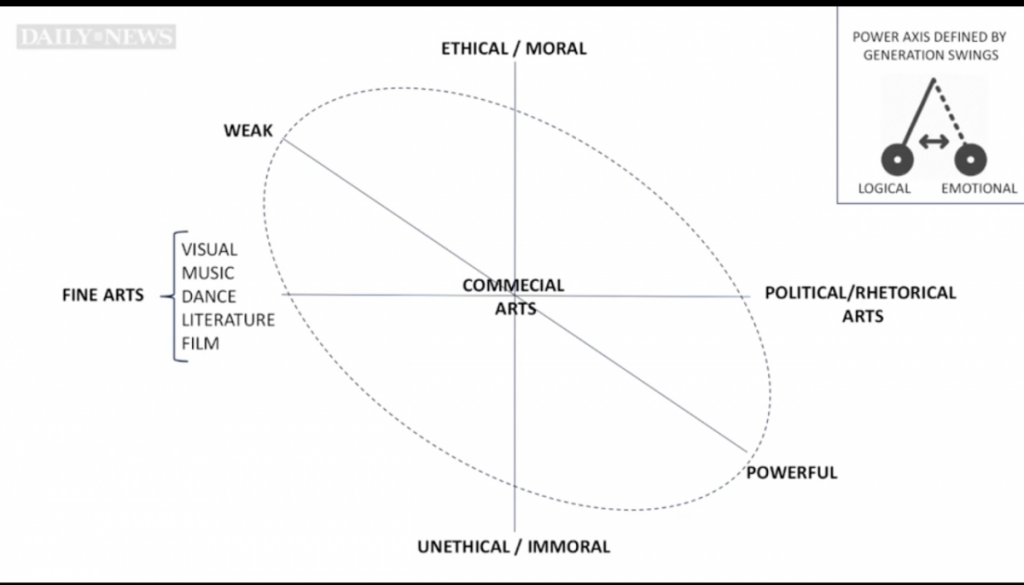 In the closing minutes of the discussion, a Q&A began and one designer asked what advice would they give to new designers coming up. Kelly stated that listening is essential and one the hardest things for her to hone. John built upon her point by saying that listening is important, but its also essential for a designer to trust that you as individual have something to bring to the design process. “Your individual background, your perspective. Believe in how you see the world and what you think is wrong”.

Overall I was very satisfied with this event and I’m considering attending their June one as well. It was good hearing directly from professionals and their take on this ever-changing industry. A lot is learned in the classroom, but far more is learned when we as step out of our comfort zones and attend events like these.