When I was young I believed that the New York Times was the only credible and meaningful paper in the city. My mother, who had me read The Times occasionally, probably influenced this attitude. She always held the paper in high regard and saw it as the paper “educated folks” would read. As the years passed, I became indifferent to newspapers and most print publications in general. The evolution of the Internet and the mobile phone revolution played a big part in that. Although I no longer had the same Times bias I once held, parts of me still saw papers like the Daily News as sort of a joke. However, our field trip to their headquarters opened my eyes to a bigger picture. 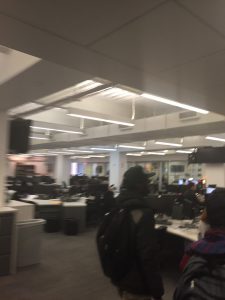 Initially I wasn’t thrilled travelling all the way to the bottom of Manhattan, but ultimately I got over it. I started having flashbacks to my summer internship at One Liberty Plaza along with various memories of early morning travels on the R train. When I finally arrived at the Daily News building, one of the first things that stuck was the fact that they aren’t the only tenants there. I began to wonder if this is the same place where the newspaper is loaded onto trucks and distributed throughout the city. I also began to wonder if their offices are very basic and cramped. Thankfully, the main lobby’s design was the perfect harmony of modern and executive. When we were finally escorted up to the Daily News floor, I began to feel a little overwhelmed seeing so many computers and people working diligently at them. Just as my mind began to shift onto my 6pm class, our tour guide Paul Kim managed to pull me out of the abyss. 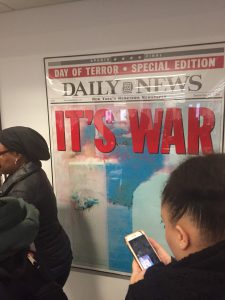 During the tour I saw walls covered with memorable front pages along with various award-winning journalists. While it was cool seeing the history of newspaper, the large conglomeration of media screens in the center of the room stole the show. After the brief tour, we were brought into a luxurious conference room. Paul soon brought in his creative team, which surprisingly was made up of individuals that weren’t much older than me. I was expecting to meet hyper individuals of the Chip Kidd variety, but it was refreshing seeing down to earth folks that also looked like recent graduates. It was definitely a nice change of pace from the typical weathered, unpredictable veterans of the design world. A thorough discussion soon ensured, where in which three major things stuck with me. 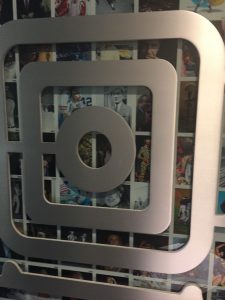 Firstly, Paul Kim stressed that the way a portfolio is displayed isn’t as important as the work in it. While being literate in web design is still a valuable asset, I felt relieved that the era of needing a fully customized website and domain has ended. “Many of people have come to interviews with a PDF or Wix website, and then presented it with an Ipad”, Paul stated. This served as an AHA moment for me and gave me a sense of relief since coding is one of my weaker areas, although I do intend on improving. The next notable concept was when Paul spoke about how the industry is split between Photoshop and Sketch. I had never heard of Sketch nor did I know such a split existed. He mentioned that while Sketch is a lighter program to use, Photoshop is still a more reliable and polished product. After doing some research regarding Sketch, I found that despite being around for several years, the program still has a lot of bugs. Due to this, many feel that Sketch is a “beta product” lacking the same stability Photoshop has. On a positive note, Sketch is a vector-based tool like Adobe Illustrator, which means that designs will look beautiful on all devices/assets.

The most impactful thing that stuck with me was Paul debunking the myth of “School Name Recognition”. The reputation associated with a school might matter in more scholarly fields, but in the world of design it’s all about creative ability. Most of his creative team hailed from NJCU, which Paul stated isn’t exactly a major player in design like Pratt or Parsons. “I might glance at it after looking at a portfolio and say oh okay they went to that school, but ultimately it’s a minor portion of the whole process”. It was great to hear this, especially since City Tech often feels like an underdog amongst other schools when it comes to design. However, it’s what one does with their education and experiences that really matters in the long run.