Origin and etymology of Diet

The word diet first appeared in English in the 13th century. Its original meaning was the same as in modern English, “habitually taken food and drink.” But diet was used in another sense too in the Middle and early modern English periods to mean “way of living.” This is, in fact, the original meaning of diet’s Greek ancestor diaita, which is derived from the verb diaitasthan, meaning “to lead one’s life.” In Greek, diaita, had already come to be used more specifically for a way of living prescribed by a physician, a diet, or other regimen.

When someone is on a diet, most likely the person is eating following a healthy plan. Being on a diet is like eating vegetables and fruits instead of hamburgers and pizza. Many people consider that dieting will make them look better. People use this word when they go to the gym and try to be healthy by eating measured amounts of food. This word is also used when you see someone skinny and then you go and say, “You might be on diet because you look so thin.” Diet also refers to the foods that we regularly eat.

When I was 15 years old, the only way to share a plate of food with others was by eating together. Now the world is changing, and so are we. It is easier to get to others through social media. People with things in common can connect by means of social networking, to share what they like.

The community of young adult instagramers who share every single plate of food that they eat is the one that I am part of. This community focuses on sharing with our followers what we eat, where we eat, and how good or bad it was.

We use Instagram since it is the most convenient platform for all of us. This social networking is designed for posting pictures. We also add hashtags, so it is easier for our followers to find the posts related with food.

For example, when I post a bowl of fruit, I use the hashtags #fruit, #fruits, #foodblogger, #foodphotography, #grapes, #mango, #banana, depending on the fruits that I am eating. We all love food, social media and pictures, and as a result we combined all those things that we like, and turned it into a community project. In our community, we do not use the word “diet” a lot because diet is to control what you eat, and we do not do that. We love food and its varieties, so we do not necessarily eat salad all day on Mondays or only fast food on Tuesdays. No, we vary what we eat in one day. We can eat and post a plate of fruits in the morning, and then a bowl of pasta Alfredo in the evening.

Even though we do not use the hashtag #diet, our followers do when they comment. The reason why they use this hashtag is because they relate diet with a plate of food, and they´re right, but not in all senses. An example of this is a picture that friend posted of a green salad with the hashtags #green #healthy #alwaysgreen #eat.

Immediately, his followers commented that they follow the same #diet. He knew that they misunderstood the post because the followers thought that the hashtag #alwaysgreen meant always on diet. We say that the word diet is used by our followers because every time we post a picture, they go and comment on the post asking “what kind of diet is that?” When it is not a diet.

One day a friend posted a picture of a veggie pizza and one person asked him if he was on a diet and he said no. He just posted it because he was eating that, and that is what we do in our community. The followers sometimes use the word diet to express their thoughts on food, and that is okay because it refers to food. In our community, this word means food eaten for a particular reason, and that is why we do not often use it.

We do not control or measure what we eat. We just buy or prepare food, take a picture of it, post it, and then eat it. You would probably never see a picture shared by me of a plate of food with the hashtag diet on it. This is because I do not follow a diet plan. It is not that my community and I are against diets. We enjoy eating, and we consider that dieting is recommended to be healthy, and also that there are limits on what we can or cannot eat.

All in all, incorporating social media and passion for food, gives as a result the community that I am part of that loves and shares pictures of food, supported by our followers that comment and enjoy what we do. 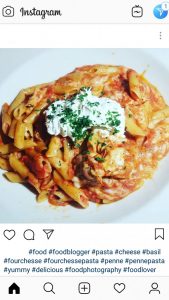 As shown in this picture, we post food. We edit the pictures, so they can look more attractive to the followers. We also include hashtags related with food or what we are eating. The hashtags are part of the image since they describe what is on it, and they help people to find what they are looking for. For example, in this case, I posted a four cheese pasta with basil and added those hashtags, so my followers can type one of them, and this will show up.