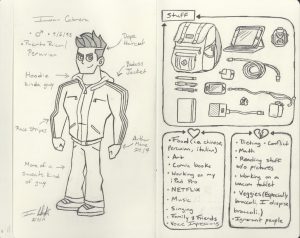 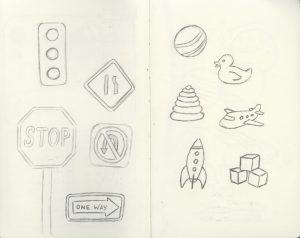 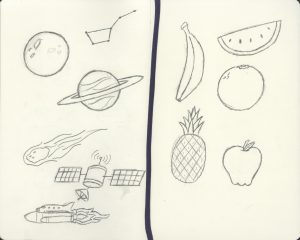 I’m a sophomore going onto my junior seeking new opportunities that the college has to offer. I enjoy art, music, and etc. I’m an artist who enjoys doodling once in a while. When it comes drawing, it’s a piece of my identity. It’s a part that everybody is fond of when they see me working on a new drawing or showing them what I’ve recently done. I’m looking into doing animation or graphic design, or better yet, making a graphic novel as well. I enjoy creating my own comics. Drawing is something I can never get tired of.

Chapter 12 from the textbook talks about this movement that dealt with Art Noveau. Mainly focuses on its origin, then went on to talk about people who’ve contributed to the movement as well. This chapter brought up a few important people that stood out a lot from the chapter. For example, one of those people that were brought up was Frank Lloyd Wright.

People that were a part of the movement were either illustrators, painters, architects & etc. and they were captivated with the movement, giving them a way to express themselves in a way that allows them to grow their creative skills and display their talent in a new different way.

The Art noveau movement originated in France but later increased in popularity and reached different parts of Europe such as Austria and Germany. Both of which were heavily influenced and participated in the art style itself.

Frank Lloyd Wright was an American architect, one who has designed over 1,000 different structures. He believed that the structures should have been designed using harmony along with humanity. It was a philosophy he went by and claimed it as organic architecture.

The Glasgow school had the same idea as F.L.W. during the movement. The school allowed artists, whether male or female, who made pieces that were focused mainly towards religious ideas. The pieces of work that was made were done by using simple lines, flat coloring and many more. The school paid mind to the idea and use of curved lines that go well as a composition.

In class, we talked about the industrial revolution which took place in the 18th and 19th century around 1760 – 1840 in England. Around that time, things in England started to become more advance due to the vast increase in technology.

It made the economy go up due to a population increase and more crops. The increase made machines do more of the work unlike using people or animals to do all the work that was given to them before the machine empire started to rise.

When all of this occurred, the beginning of the Victorian era had started. Around 1837, it began and developed art that shows more of an emotional meaning into it. Later on, due to how delicate each piece was when created needed to be mass produced. In a way that makes each piece interested and appealing to those who see it.

Around then, Photography had been invented and the concept of lithography was the process of only using oil based products and stone base which is also known as stone printing in Greek. Lithography was an art form used for mass production with transferring a drawing from stone to paper. The use of chromatography was effective which helped develop plates of Cyan, Magenta, Yellow & black or what we know as today CMYK. Nowadays, the use of CMYK is mainly when people print documents or papers in general. 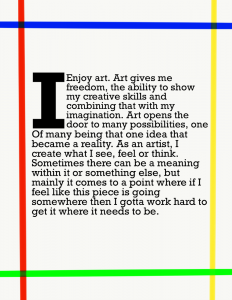 In the second class we had in Art History, we learned more interesting stuff. This time, it takes place in Mesopotamia. For example, Mesopotamia’s visual communications and advancements. It led to the birth of the alphabet in Phoenicia & the Greco-Roman world.
We then learn that Egyptians based their hieroglyphics on the way  how a word sounds and would represent it in a drawing. They were visual symbols that were made to signify syllables and words. The alphabet made sense to those of the ancient civilizations. There’s different types of writing and alphabets such as the Phoenician alphabet, the Greek alphabet, and the Roman alphabet.
The Phoenician alphabet was one of the alphabets that more easy to use compared to all the others. Later on, it was changed to have vowels in it due to not having any. As for the romans, they used it as well thus making the Latin language the language they use.
This session caught my interested, never knew much more in depth of topic. Really does make you think though about how all came to be.

What I learned in class was a variety of things that relate to writing throughout history. Some things that we talked about were cave paintings & understanding different texts such as hieroglyphics. Throughout the class, we saw four videos & learned a lot of new things related to writing.
The first video we saw shows archeologists who found cave paintings that was drawn in the caves 15,000 years ago. They theorized that either cavemen or some early form of humans could have done those paintings. The other video which was the second video shows the top 10 cave paintings.
The top 10 paintings in the video showed unique & fascinating designs. Paintings like the Laas Gaal cave painting & the Magura painting are two examples from the 10 that stood out to me the most due to its intriguing design & use of colors within the paintings. After that, we then saw a video that talks about the Rosetta Stone.
In the video, the guy talks about the stone saying that it was very hard to understand. It took scholars 20 years to finally understand it. The Rosetta Stone consists of 3 different languages, Hieroglyphics, Demotic & Ancient Greek. They make replicas of the stone every couple of years so that people can go see it and touch it. We learned some keywords as well. They were Petroglyphs, Pictographs, Ideographs & Phonograms.
The last thing we saw talked about the Book of the Dead. It’s an ancient Egyptian funerary text that was used around 1550 BCE to 50 BCE. It aided the scribe to obtain immortality. The text was written by the pharoahs.