Skip to primary content
Skip to secondary content
According to the 2012 United States Census Bureau, there are a total of 45,660 eating establishments ranging from full-service restaurants to bars, taverns and nightclubs. My strive is to bring eaters to the best “cheap-eat” restaurants, “street food” street-carts and places ideal for a dinner date.

Hello readers, My name is Husaan Iqbal from the “Robots in Space” blog. I’m guest blogging on Henry Tam’s blog about growing vegetables in Space. Enjoy. 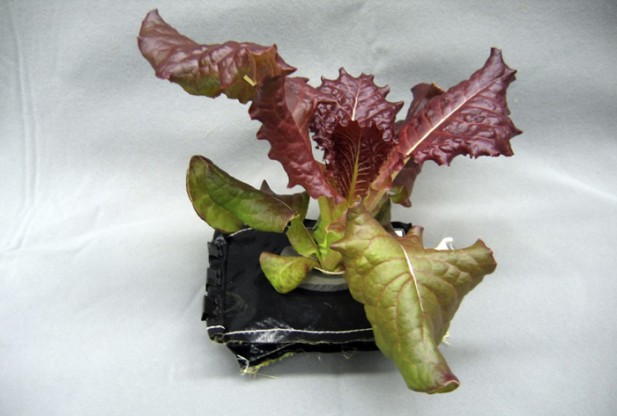 Astronauts will soon have green thumbs in Space when they start growing their own veggies. With the help of a cargo mission from SpaceX, NASA will be sending a Vegetable Production System to the International Space Station in hopes to brighten things up in the kitchen. Two and half tons of veggie cargo will be sent into orbit which will include a growing chamber that uses red, blue, and green LEDs to grow plants. Besides getting culinary benefits from the vegetables, the plants will also recycle water and air. The chamber has an embedded environment control system to provide the ideal temperature and atmosphere to grow vegetables in space. Seeds will be placed in rooting pillows where they will germinate by the help of water and nutrients, which will help researchers study how plants grow in weightless conditions. Space crews have reported having plants around gave a comforting feeling and made them feel less out of touch with Earth. Link

Oh Taisho is a very small, but popular Japanese restaurant located in the growing neighborhood of the East Village of New York City. The East Village is well known for it’s crowded streets and party atmosphere on Friday nights and weekends. This restaurant is often the place of choice when my friends and I are in the area and craving some good Japanese food and sake.

This restaurant offers a variety of famous Japanese dishes including bento boxes, meat skewers and sake shots. The atmosphere of this place is often dimly lit with a nice ambience with table side food preparations straight from the grill. Variety is definitely a big plus here, since there is never a shortage of food that will go bland and boring. Also, this restaurant is open pretty late. The hours of operations are from 5pm to about 4am. This place makes a good place for party goers to grab a bite to eat. 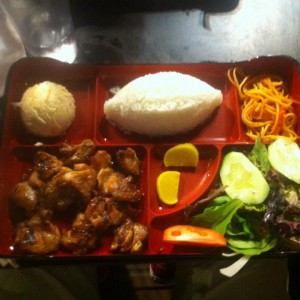 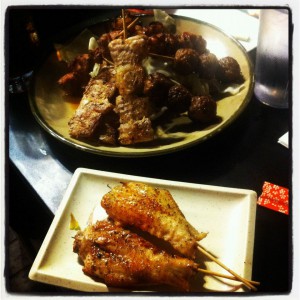 Wait times of up to one to two hours are not uncommon at this place because of the popularity of this restaurant. The chicken teriyaki bento box is my usual everytime I come here. It consists of a small salad, chicken teriyaki chunks,spaghetti, potato salad and pickled ginger. Sounds simple and easy to make right? I remember one time, my friend and I came here for dinner, and my friend ordered a bento box. I ordered a bowl of ramen. It took me about 15 minutes to complete my meal, while his order didn’t even come yet. He ended up cancelling his order.

If I were the owner of this restaurant, I will think about expanding my business to next door. This place is literally a fire hazard with chairs and customers blocking the aisleway to the exit. I would also look to improve on the wait time for the preparation of the dishes.

November 6th 2011. The day I took my first of over one-thousand food photographs on my Facebook page. I can recall this photograph being taken during my friend’s birthday celebration at a cliche American chain restaurant; Applebees. The dish was a partially eaten sauteed shrimp skewers over a messy bed of rice. This was also around the time of when I got my new I-Phone, so as a curious user, I captured a ton of photographs of whatever I could. 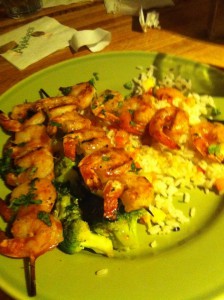 As I went on to take more and more photographs,I uploaded these images to my Facebook page. The 30 or so photographs later drastically increased to hundreds and over one-thousand. In the future, I plan on exceeding this amount and I might even need a second album.

Anthony Bourdain. Food critic, traveler, writer, author, eater and host of an action packed and intriguing television series No Reservations. Not only do I adore and try to emulate his style of writing, I absolutely love his down-to-earth attitude and honestly when criticizing new and different cuisines. Bourdain also grew up in New York City, and held almost every possible position in the restaurant business. Living and growing up in New York City, there is an endless possibility of new and unique foods always peeping up on the horizon. Well known eaters such as Anthony Bourdain play a quintessential role in the decision of what and where to eat. 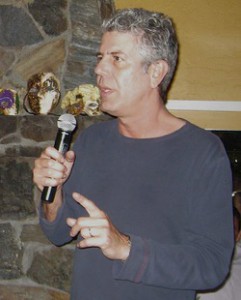 Linked here is Anthony Bourdain’s Tumblr page. Just give it a read and you’ll have a taste of his writing style and why he’s my foodie role model.

This is a photograph that I captured when I was enrolled in the Introduction to Digital Photography course here at City Tech.

The concept of this photograph appeals to me because this was of the first images that I was proud of composing when I first started learning photography. The outcome of this image took multiple test trials and failed under/over exposed shots. This shot was the result of about 10 trials, and I achieved it by playing with the exposure settings on my camera and with the use of a tripod.

Other than the fact that I chose to capture this image during the nighttime to put extra emphasis on the streaks of light from the moving cars, I took this image to capture the constant hustle and bustle of this ever-so-busy metropolis. Fifth Avenue by Central Park was the perfect setting for this image with the barrage of tourists and moving cars.

This image differs from the other images on my blog because of it’s complexity. Generally, when we look at pictures of food, we usually see simplicity and order. Specific items are placed on specific parts of the plate. Meanwhile in this image, there is an abundance of hues of colors, ranging from the dark colors to the left of the image, to the very bright colors to the right of this image.

The capturing of light is an extremely popular form of photography especially here in the city where even at nighttime, artificial light illuminates the sky.

One of the earliest forms of motion photography was brought up in 1838 on the Boulevard du Temple by Louis Daguerre. In this image, one can see a “empty street”. But was the street really empty? No. The first motion exposed photography ever produced did not capture anyone on the street because of its long exposure during the daytime. What it did capture was a someone who was getting his shoes shined, since he must had been stationary for a long period of time.

Facebook. It seems that everyone has a Facebook account these days. Young, old, mothers, grandmothers, and even elementary school kids. Facebook was one of the first social media pages, created by now world famous billionaire; Mark Zuckerberg.

I made my Facebook account back in 2008, when I noticed that my friends were sharing pictures and updating their statuses on this site. I was surprised to see more people than just my friends. I saw a lot of my elementary and middle school classmates in this jungle of gossip and photo sharing social media networking site. When I first made my Facebook account, I didn’t have a lot of friends. I received a few friends requests here and there, and also an abundance of requests to online games. I was confused, but after playing around with the site, I quickly adjusted and became used to it.

Now, (like back then) Facebook is still a site where friends vent about their problems, post photos from Friday night’s party and a place where stores pay to advertise their sales on the page. Unlike back when I first created my Facebook page back in ’08, I didn’t care about what I posted. I posted a lot of derogatory statuses and statuses that were inappropriate. As I grew older, I started to make my Facebook “more professional”. I deleted all of my past statuses, inappropriate pictures and I stopped adding fuel to the fire on other people’s statuses.  This was mainly because I didn’t know who could be looking through my profile. Anyone from my family members, church members to potential employers can be “stalking” me.

If you look through my profile now, you’ll just see a few photo albums here and there. I think twice before I post statuses now. Now that Facebook is making easier to “stalk” people, I stopped using profanity in my statuses. I also go “offline” when I don’t want to be bothered lol.

Yeah, so Facebook has sure gone a long way since it’s introduction back in 2004. It’s being used by all sorts of people from all around the world to connect with others.

Whats up?! Henry here. Thank you for stumbling upon my blog! The purpose of this blog is to take my readers along with me as I trek around New York City trying new cuisines.

The strategic mission of Henry’ Food Adventures is to provide viewers with a blog that includes an abundance of suggestions, recommendations and photographs of cuisines that are offered in the New York City area to aid in the choosing of restaurants.

I will respond to:
My readers:  They will be addressed in a quick and prompt fashion after reaching out to me section of the blog.
The eaters: My short-term goal is to provide the eaters with easy to follow recipes on my blog.My long- term goal is to ensure that the eaters will enjoy these recipes that I have
provided and recommend them to a friend. I will provide a Feedback section on my page so that my viewers can leave feedback after trying out the recipes.