Gruit (alternately grut or gruyt) is an old-fashionedherb mixture used for bittering and flavoring beer, popular before the extensive use of hops. Gruit or grut ale may also refer to the beverage produced using gruit.

The wine shop I decided to visit for my project was Uva Wine & Spirits. It is located on 199 Bedford Ave, on the corner of S.6th St. It is a fairly small location but they carry a vast amount of wines at varying prices and the staff is always willing to help every time I go there on the way to my mom’s house. Because if i’m going to my mom’s house lord knows I need a drink. The staff is fairly young I would say mid thirties, hipsters of course, but vey friendly, two guys Mark and afdfgirtio, which is what I understood for some reason, after asking him twice I gave up and nodded in failure, and one girl named Lauren. 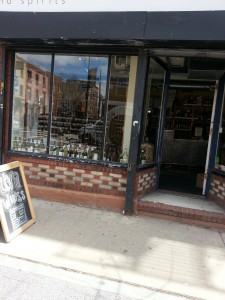 The out side of the store

The day that I went was on a Saturday mid-afternoon and they had just got in a Chilean wine from some French manufacturers called Pipeno. It was very oaky and I smelled blackberry for some reason. It didn’t coat the pallate which I like and it didn’t linger in the throat either. It had mild acidity but yet very pleasant and a bit of a kick with the alcohol. I don’t remember the year or much else because people kept walking in and getting Lauren’s attention, after that happened two time I walked away. With my drink in had of course, no spit cup. Pipeno is usually cheap wine in Chile made from you grapes, but according to Lauren is not that easy to get in the U.S. and she was hoping to get the word out with the tasting. Pipeno is also used to make a mixed drink called terremoto, which means earthquake, and it is composed of a cheap sweet wine (pipeno) and pineapple ice-cream(sorbet). You can play with the recipe a little but when done right it is delicious and strong. Back to the topic. 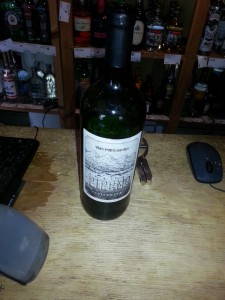 To the left of the store they have the Italian wines just 4 simple racks divided into North, South, East and West. I stood there a while and saw some wine from Piedmont, which I forgot to take the name down, sorry, and a a moscato d’asti. This particular one I ended up purchasing because I had bought a little cheesecake from Fabian’s pastry shop a block down and according to Lauren it would make a good pairing. To the right of the store you have France, Germany, Spain, as well as other regions. Again about 3 to 4 racks each. The prices range from $11 to $30 on average, right up my alley, but I did see wines for $60, $80 and above, not my alley, in each rack. The racks are against the wall so it lends itself to be walked around, the only thing that I saw that was maybe weird is that if your not paying attention you’ll go from one region to another without noticing because there aren’t any variations to the racks, just the signage above them to distinguish them apart. I like the fact that they sell cases and I believe they might serve parties if their large enough, because at the time that I was there someone was inquiring about what kind of discount they would get for a large order. 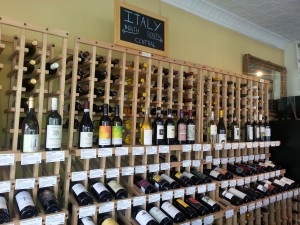 In my opinion the place is small but can do a better job at organizing itself. Maybe a couple of shelves that you can walk around with the $7-$15 wines on it. That way people like me are not walking around taking up valuable real estate, we can just get in and get out but if we’re in the mood to shop we also have the option. Another thing was that they were doing stock replenishment on a Saturday afternoon while customers were shopping around. I have worked retail many years and was a stock guy and a stock manager and you should replenish your stock by Thursday in anticipation of your weekend rush. as thing sell down you replenish during down time or after closing. Deliveries should be made early in the week, Friday morning the latest, so you can know what it is you have and be able to plan accordingly your sales and your staff. Besides that I like this place and the people that work there. I bought a wine here to enjoy with a dessert and I will say it was fantastic. The wine should have been a less sweeter maybe more towards the dry side to balance the sweetness of the cheesecake better. But in my house everyone like the pairing. 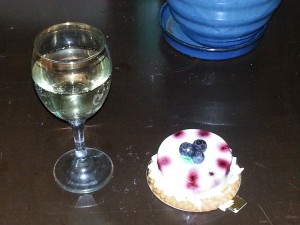 Enjoying the wine with a blueberry cheesecake, nice.

I plan to go back, maybe for a wine tasting next, and put some of my new found skill set to test. I must admit you do get a weird feeling of pride when you walk in and you recognize something or make a fact based decision on a wine instead of just “ahhhh this one, no wait this one, $12 yep this one, that type of randomness.

I saw this segment on Bloomberg tv, thought to share it with the class. This is the link: