I had the chance to visit Macari Vineyard located at 150 Bergen Avenue Mattituck, NY

Macari Vineyard goes back from the 30’s and 40’s when Joseph Macari Sr. started making wine in the basement with father and grandfather in Corona Queens. In the 60’s they purchased a 500 acre from a former potato farm in Long Island. After 30 years of growing grapes and producing wine they hoped on and moved out to North Folk and started to plant vines.

Joseph studied with bio dynamic viticulture which is also known as organic farming, with the studies that he gathered he knows the health of the plants, character of the grapes the living soil, and produce some if the best fruit on the east coast.

It was about an hour and a half ride to get to Macari Vineyard, I didn’t feel it much because I had taken a nap. The sky was blue with some nice light clouds. When we arrived it felt very homey, very countryside and relaxed. When I walked in there was this huge display of their 2016 Rose Wine. They had wooden barrels below them to support the weight, also cute gift bags and decorations around them.

After looking around someone finally came to us and introduce herself. Me and my friend did call previously if they offered a tour but they said they weren’t available for tours, we mentioned it again but the tour wasn’t available. So we just told her we were on a school assignment and wanted to explore some tastings. She was excited to give us some tastings and pulled out a what looked like a menu.

It was organized in three different categories from light body wines, to medium, and full body. We decided to go with the Medium bodied wines for $25 which included, Sauvignon Blanc 15′, Chardonnay Estate 13′, Rose 15′, Carbernt Franc 13′ & Merlot Reserve 10′. Right before getting to the tasting they asked us if we want to purchase some cheese and crackers for the tasting. We decided to purchase some Honey Lavender Fromage Blanc and Crostini Tuscan Crackers.

The first wine that we tasted was the Sauvignon Blanc 2015 produced from a steel barrel which is where Macari Vineyard Produces their wine. Unfortunately I wasn’t able to get a photo of the steel barrel because it was in the back room which we weren’t allowed to go in to. Back to the wine, being underage I wasn’t able to taste the wine but I did get the chance to smell it. Swirling it, it had medium viscosity, it was day bright and smelled very clean. I smelled green apples, lime, very much in the citrus side.

The next wine that we tasted was Chardonnay 2013 produced as mentioned previously in a steel barrel. The viscosity was also medium, It was day bright as well with hints of lime green. The smell was clean, and had hints of peach and vanilla.

We came to upon the 4th wine which was the 2010 Merlot reserve, in which I remembered in class we touched on that. When a wine has reserve on the front label is because it’s said to be the wine has a higher quality than usual, or a wine that has been aged before being sold. When I asked the lady who was attending us, she said the meaning reserve here doesn’t have much meaning as it does for wines in France for say.

After exploring a bit, and smelling a few wines, it was time to head back home this was a very educational trip because it helped me know the aromas of each wine, something I never looked into before taking this wine class. In the future I would come out and by then be able to try the wine and learn more about it mouth wise.

When I first encountered this assignment, I didn’t quite know how to approach it because I’m not a big fan of wine and don’t ever really drink it. Although I wasn’t going to be tasting the wine, I wasn’t sure I had the enough information to go in a wine store and question them regarding their store. Luckily we came up with questions in class which gave me a sense of confidence to go.

I visited a close by wine shop by where I work, Warehouse Wine & Spirt located 276 Avenue X Brooklyn, NY 11223. 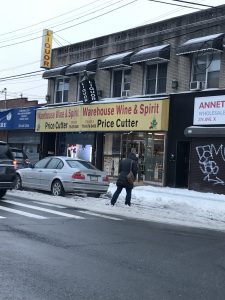 Right before I entered I took a breath and opened the door and my eyes quickly noticed how big long the store expanded to and how organized it was. I then was approach by a gentleman name Sam. I informed him that I was doing an assignment for wine class and if he had some time to answer a few questions and take few photos. He answered, “oh sure I have all the time in the world as you can tell” (empty store) As I

My first question which one was which was is the most popular wine during this season?

He said it would have to be the Yellowtail Sauvignon, because it’s an affordable price bottle for a good quantity.

My next question was, How much money does a customer usually spend?

Sam said around $20-$40, as mentioned their price is very economic for their location and also they know who they are targeting so the range is fine for the community.

The following question was Do you get questioned by customers for answers or recommendations on the product they are buying?

He mentioned that not a lot of customers come in looking for questions, they pretty much know what they’re here for, pay and the head out. There has been a few times couple of weeks ago, where someone asked him about the region of the wine or whether it was dry. 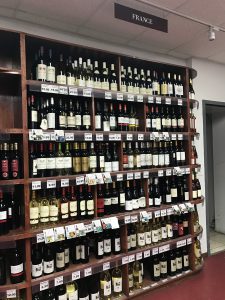 The following question I had was Which category of wine was sold the most Red or White wine?

He said, it’s very hard to say because there is so many varieties of both and they both seem to hit the top.

I then asked if I was able to photograph around and he said sure, I really like how they had mix wines of Red and White in one category according to their country, of course it’s to save storage, but I just liked seeing the different regions, grape variety, producer. 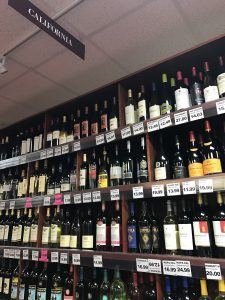 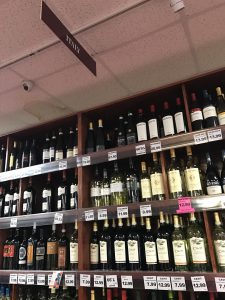 I also liked how they had sales for their wine, like the one above. An Italian White wine Ruffino- Pinot Grigio it was on sale, 3 for $10.58 Ea. They also had a small section of different regions and producers of Sauvignon Blanc (photo below) There was one from Chile, New Zealand from Marlborough which refreshed my memory from last week wine class. 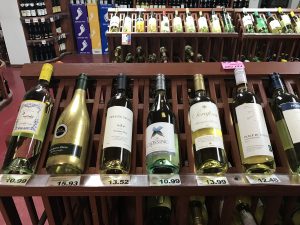 From never entering a wine store I would recommend this store for a quick stop on your way to friends/family house, or for a special someone. It’s super affordable and have a wide range in varieties of wines to vodka, liquor. It was a nice experience and made me more curious into learning more about wines.