Have you been to a brewery? I know I never been to one. This was my first time going to a brewery because of this assignment. Although, I was a little disappointed that I couldn’t go to a winery/vineyard, but it wasn’t bad going to a brewery. It was a really fun experience and I got to learn some new things about beer. The brewery I went to is Coney Island Brewery. It is located at 1904 Surf Ave., Brooklyn, NY. 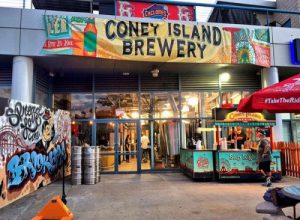 The place is not so big, but can still try to get the most out of it. They also provide free tours from Thursday through Sunday at 2pm, 4pm, and 6pm. At the brewery there are also tasting, but it will cost a fee of $5. It is nice to go on the tour to learn more about beer, but the unfortunate thing is that it is a little difficult to hear the tour guy due to all the noise outside and in the room. 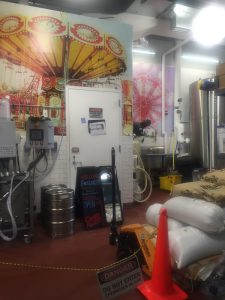 During the tour at the Coney Island Brewery, we got to see the processing room of where they make their beer. It is where they keep their kegs and try to create new type of beers. The room is not really big. It is like going straight in and making some turns and you’re finish. Although it is small, but I still got to learn some things about beer. As I was having the tour in the processing room, I saw many carbon dioxide tanks. The carbon dioxide are used to produce the foam on the top surface of the beer.  I also learned that it was form during the process of fermentation. Before I went on the tour I didn’t know that that’s how they form bubbles and I wonder why is there always so much foam in beer.

Aside from carbon dioxide tanks, there were also many other tanks. The tour guy explained what each buckets and tanks were for and how they process their beer. In the processing room there are yellow buckets that are filled with different grains. After choosing their grain they want to use, they will place it in the grain mill. When all the grains are broken up; it goes into the mash tun tank to mix up the broken grain with hot water. With hot water, it will turn starch into sugar.

After those steps the beer will go into the kettle of hops. I learned that different hops from different places will have different flavors. The next step is to move everything to the heat exchange machine to bring the boiling liquid down to a lower temperature around 55 degrees; depending on what beer. But this doesn’t mean your beer is ready because you don’t have beer until you add the yeast. For the last few steps of making beer, they fill the fermentation tank with yeast including the liquid that was made previously and add any other flavoring or fruits if they want to create a different flavor beer. 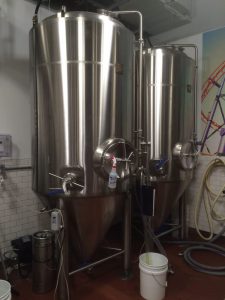 When the process of making beer is finished they will go through a filter. After going through the filter they will store the beer in kegs. At Coney Island Brewery, not all beers are filter, only some. For every batch of beer they make, they can fill up 15 kegs. In the processing room, they also had another small room where they keep their kegs. The kegs are used to store their beer and keep the freshness. 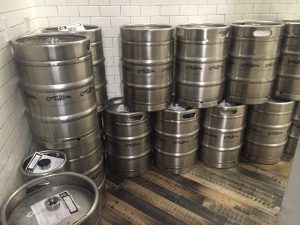 At Coney Island Brewery, there are a lot of history. Their brewery is filled with old Coney Island pictures around the place and old ride pictures that Coney Island was known or represented for. I believe same goes for their beer. Beer at Coney Island Brewery can also be a place representing Coney Island. Their brewery also have many different types of beer. There is 8 tap beers that they serve, but it rotates through out the year. During summers the Cotton Candy Beer is a good sell. Although, the most popular beer there is Mermaid Pilsner but when I was there I also notice a lot of people like to get the Flight. The Flight costs $8 and you get four different types of beer. It looks quite interesting. Here at Coney Island Brewery, I had fun and enjoyed my tour. I learned a lot about beers and some day when I get to drink, I will definitely come back and give it a try. I would recommend others to come here and have a nice drink. 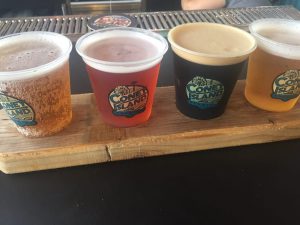