This was actually my favorite part of the class. When I was making my plans for this trip I wanted it to be something me and my family member could be, so I figured the best time to go would be during spring break for I had about two weeks off from school. I had three places in mind

The place in L.I. was more of a last resort so I didn’t do much research for it. Some of my family members live in the area and if I found myself in between a rock and a hard place then we would just make a weekend adventure out of my project. The more the merrier; this was a first-time experience for not only me but my family as well, I wanted everyone to understand some of the joys of life. Unfortunately, that didn’t happen. I was overcome with happiness when I found Millbrook Vineyards & Winery, not only did they compensate the fee for entry for students but they also had a coupon on Groupon for groups. I guess the timing wasn’t right for my time at Millbrook because I and my family didn’t make it.  My mother had a doctors’ appointment beforehand and the drive was about 2 hours give or take, so my brother and I just canceled that plan, but our Groupon can still be used at a later date.

However, that same day we did have time to take a visit to Gun Hill Brewing Co. which as the name states is not actually on Gun Hill Road but is on Laconia Avenue. The name Gun Hill came from the brave soldiers who climbed said Hill to fight off the Britsh army (Gun Hill Brewing Company). With a name like this to represent the Bronx, this was the best choice. My top three choices there was one outside my comfort zone, and one was a safety net. Since it was only a 5-7 minutes drive to the brewery we figured why not go check it out, and at the end of the day it would fulfill my requirements.

This brewery is only 3 years old with its opening being in the year of 2014, and the locals really love their unfiltered beers. “One notable brewer of the style is in the Bronx, which had a breakout year in 2016″(Licata) according to the Daily Meal, in 2016 GHBC collaborated with the Broadway show “Hamilton” to craft a brew. Not only was the brew a big hit, but some of the profit goes towards a charity that was established by Alexander Hamilton’s late wife. 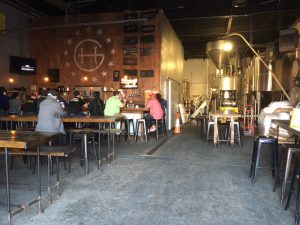 Upon entering I thought I was in the wrong place. It basically looked like a fancy garage.

My brother mentioned that he knew where it was that we were heading to, he and my uncles occasionally stop by when they want something different. He thought my reaction to walking in was funny but assured me it does like a “fancy garage”. In the back, you can see where the magic happens. All the beers served here are made in the same place. Of course, there is a border to how far you can go into the premises. This is where the hard part comes in. It was really hard for me to get a tour of the place. The first time the manager didn’t have time, and I understood because it was last minute, I made sure to get a business card so I could call next time. The second time when I called the day that I was given was way after this assignment was due, so I turned it down. The third time didn’t work out either. In the pictures below you can see for yourself what it was like for my first visit to one of the Bronxs’ many diamonds in the rough. 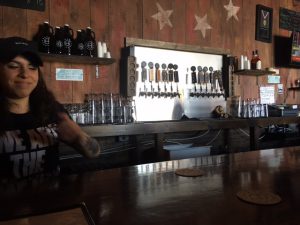 Here in this picture is how their tap is set up. The person seen is the very helpful and only bartender at GHB co. Even though we weren’t able to get a tour she made sure my mother, brother and I enjoyed our time spent there. 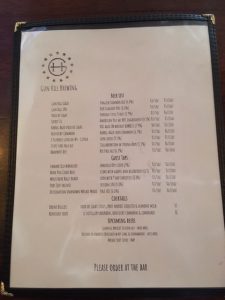 The front of the menu which showed the beer list, guest taps ( brews only there for a certain time), beers/brews coming soon, and two cocktails they offer, both made with their brews in it

Beer cocktails was actually a new term for me. Not only did the two they carried sound delicious but when I watched the bartender make one it look really good. To define what a beer cocktail consist of is simple “some style of beer mixed with other ingredients to produce a finished, balanced drink. While most traditional cocktails are made with hard liquor as a base, beer cocktails don’t necessarily have to feature anything but beer“(VinePair). Apparently, this is a rather new concept to the brewing world and I can’t wait to try it. 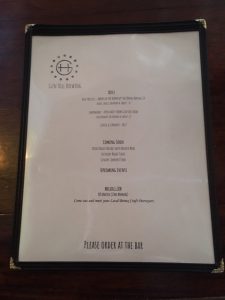 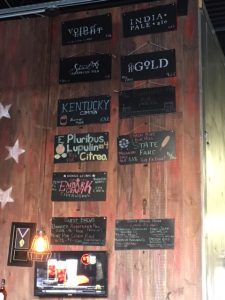 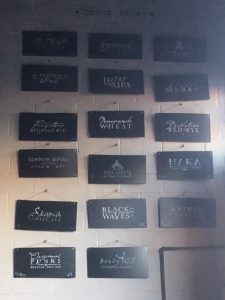 When you walk in there is a wall to the right where all their famous brews are. These brews never go away. 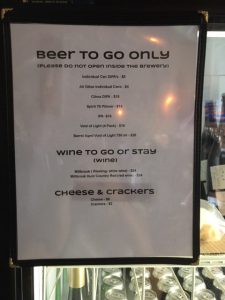 Apparently, they stopped doing tasting of their brews however, you can bring the goodness home with you 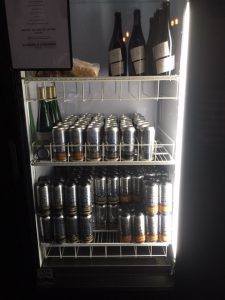 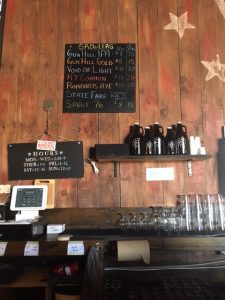 This board shows how you can order each brew and how much they cost. Then there is another small on which show the hours.

Even though there were no tastings of the brews,  the bartender (I feel bad because she never gave us her name but she helped me so much. I forgot to get her name by the end of our visit. She even comped half our bill.) did let us sample any brew we seemed interested in. I couldn’t taste due to age but I took notes from my brothers’ approval. 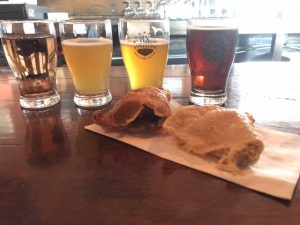 From Left to Right
Nine Pin Cider Rose 6.9% Cider with grapes and blueberries, E. Pluribus Lupulin Citrea 9.3%, Stron Rope and Gun Hill State Fare ‘Murican Pale Ale 5.3%, Kentucky Common Barrel Aged 6.4%.
On the bottom are their Empanadas which aren’t made in-house but delivered fresh from a Latino restaurant close by delivered every morning, and served that same day. There are only two kinds, Chicken and cheese, and a Chop-cheese which was my favorite. I couldn’t have any beer so I had about 4-5 of those bad boys.