So two months prior, in Spring I was in Orlando, Florida for my birthday end of the week. Regardless of all the fun I was having and school being the minimum essential thing at the forefront of my thoughts now, something instructed me to simply look into vineyards to check whether one was adjacent where I was remaining. I'm glad I did that in light of the fact that there was one only 28 miles from where I was remaining. So the following day, I devoted my day to visiting this vineyard, so I won't need to pressure myself about going to one amid spring break in New York. The name of the vineyard I visited is Lakeridge Winery and Vineyards, which is situated in Clermont, Florida.

Here at this vineyard they offer complimentary winery visits and wine sampling which was a major in addition to. On Spring twelfth, 2016, my cousin and I took the 28 mile drive to Lakeridge Winery and Vineyards so I can finish this task. We touched base at 10:50 am and the visit begun at 11 am. The visit kept going around 50 – 55 minutes. It began with a 10 minute short video introduction, where Ben who was forever my visit control for the day talked the developing of the grapes on this site, wine making process and the packaging and naming of the wines made here.

In the wake of viewing the video, we quickly gone to see the vineyards. The five grape assortments developed at this vineyard are: Blanc Du Bois, Stover and Suwannee which are crossover grapes and Honorable and Carlos (red) which are Muscadine grapes. Ben revealed to us that Mixture and muscadine grapes developed in Florida endure in view of the ailment obstruction they have and versatility to the warm, moist atmosphere that Florida brings to the table all year around. Next we went to the tasting room, where we tasted four wines that are created and packaged at this area. The four wines are:

Lakeridge Chardonnay-this medium bodied white wine was exceptionally smooth and reviving. It's the first on this rundown since it was my most loved wine I experimented with of the other three we attempted.

Southern Red-this is a light bodied red wine produced using the Honorable assortment of Muscadine
grape. This wine was extremely fruity, yet had a harsh delayed flavor impression that I didn't appreciate
by any stretch of the imagination.

Southern White-this is a white wine produced using the Muscadine grapes that this site gets from neighborhood ranchers. It was light bodied, fresh and finished with a fruity delayed flavor impression. This wine sort of helps me to remember Riesling.

Stover Reserve– this white wine is produced using Stover grapes developed nearby. It is medium bodied to me and dry. In the smell and taste of this wine all I got from it was green apples. This wine must be tasted on visits giving on Saturdays on account of the restrictions of the creation. I was extremely fortunate to go on a Saturday and attempt this wine.

Paumanok traditionally makes wine from Premium Vinifera grapevines with an impressive range of grape varieties like Riesling, Chardonnay, Sauvignon Blanc, Merlot, Cabernet Franc, Cabernet Sauvignon and Petit Verdot, but Chenine Blanc is the oldest and best. Paumanok is the only winery in Long Island to have grown the grape for many years. The vineyard plants 1100 to 1400 vines per acre to produces concentrated fruit for high quality wines.

Paumanok Vineyards climate is most common with Bordeaux which is very much a maritime climate, as Long Island is an island that extends out into the Atlantic and is surrounded by the Peconic Bay. The soil of North Fork is sandy and gravely subs soil, so the soil drains exceptionally well when it rains. Due to the cool climate the grapes are allowed to have a long ripening period. Due to the weather patterns they sometimes have variation in their vintage, and the alcohol percentages in the white wines are from 11% to 13% and the red wines fall in the range of 11% to 14%.  The vineyards are open to different viticulture methods but they follow a simple 100% sustainable vinicultural technique which is to grow the healthiest and plump grapes to make great wine, bottle it and preserve it, the remains are used in the soil which also helps with the flavor. The vineyard has a range of minimalist wines which consists of Chenine Blanc, Sauvignon Blanc and Cabernet Franc.

I visited Paumanok with my friend and mum and was surprised by how big and rustic it looked. When we entered the barn like house we found ourselves in the tasting room which was not very big and overlooked the vineyard and a patio. I was met by an employee who was willing to answer my questions but she had limited knowledge about the vineyard and its practices. She mentioned that we could go and take photographs of the vineyard and the crushing area where I took my picture. When we returned back to the tasting room for a wine tasting, we met Beth, she was very knowledgeable and was able to answer all my questions as well as give me additional information. She mentioned that they make around 10,000 – 15,000 cases of wine in a year. 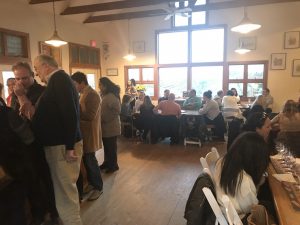 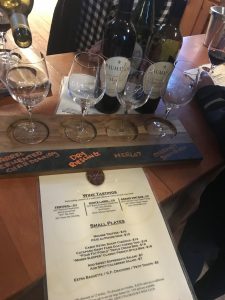 They had 3 simple tasting menus ranging from $15 to $20. We decided to taste the White Label wines which consisted of

And a cheese platter 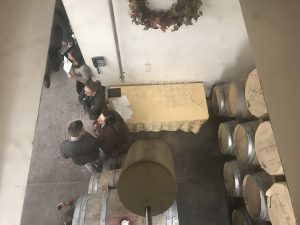 I was unable to tour the barrel tasting room as they had an event, but took a photograph from the glass ceiling of the event in progress. 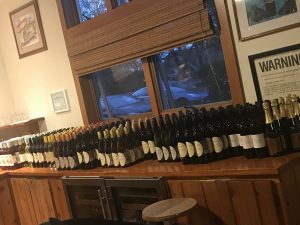 All the wines mentioned in their list was for sale. 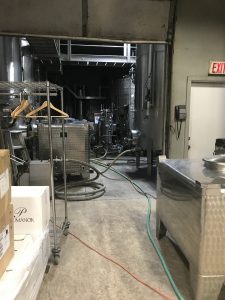 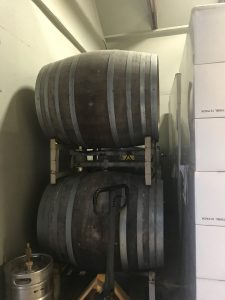 Vinification process they use Oak Barrels and Stainless steel tanks, they bottle the wines on the vineyard with their bottling equipment. 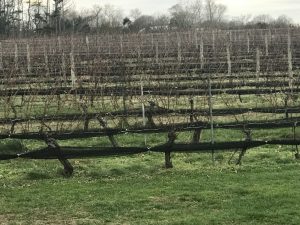 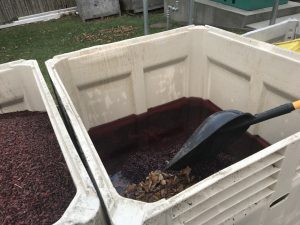 When passing the large bins the smell of wine and yeast was strong and surprisingly pleasant. I resisted the urge to stick my finger in the bin. 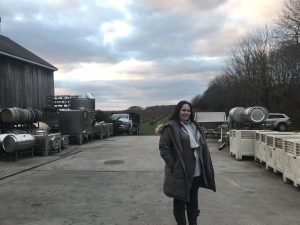 PHOTO OF ME STANDING IN THE GRAPE CRUSHING AREA