I went to Sannino Bella Vita Vineyard on October 21 at 12 pm with two classmates, Mei and Preeya. Sannino Vineyard is in the North Fork of long Island, New York. The three major AVAs are Finger Lakes AVA, Hudson River AVA and Long Island AVA in New York State. The Finger Lakes region is the largest wine region in the state. In the Hudson River AVA, chardonnay is one of the most successful grapes being produced today. Long Island wineries began in 1973. The Long Island AVA, the Hamptons AVA and the North Fork AVA are all on the eastern end of the island (Austin, 2017). At the Sannino Vineyard, they offer several different types of wine tour experiences. We chose the vine to wine tour. It costs $50 per person, including the wine tasting and cheese plate. It was worth it. It was supposed to be a one and a half hour tour, but we stayed there almost three hours.

Actually, it was a really bad day to tour the Vineyard.  The weather center issued a gale warning on that day. It was a beautiful day with the clear blue sky except for a strong windy. We arrived at the vineyard around 11:50 am. Our tour started at 12pm. There were 5 people for the tour, including Mei, Preeya and me. A couple joined the tour too. Bill Kovacsik was a guide. When we walked in, they served us welcoming drink, which was white wine. We went to the tasting room. Bill explained what it takes to make an exceptional wine, starting with the vines, soil and climate conditions which all impact the type of wine being produced. The North Fork is bounded by Long Island Sound and Peconic Bay. Therefore, Long Island enjoys a maritime climate, which offers protection from spring frosts and damaging winter low temperatures. East of the North Fork, spring frosts can be a limiting factor for grapes. Fewer vineyards are located on the South Fork, due to escalating land values and a slightly cooler growing season relative to the North Fork. Soils are naturally acidic and low in organic matter. Many vineyards on sandier sites benefit from irrigation (Extension, 2018).  Bill Sanok came and joined the tour while Bill Kovacsik was explaining about the vine. He studied the agriculture. Bill Sanok also explained about the wine agriculture history in Long Island, New York. The vineyard has many estate wines to choose from, such as cabernet Franc, Merlot, Cabernet Sauvignon, White Merlot, and Chardonnay. We went out to see the vines.  They harvested Merlot just before the day, so we could not see it on the vines. We saw the Cabernet Sauvignon grapes on the vines. Bill Kavacsik explained how to protect grapevines from birds and animals. They use bird netting. They cover the grapevines. Even though they use nets, birds still feed on the grapes, near the net. He also explained the difference between Merlot and Cabernet Sauvignon grapes. Both Merlot and Cabernet Sauvignon originated in the Bordeaux region of France in the 15th century. Cabernet Sauvignon thrives when planted in the gravely soil as was found in the Medoc region along the left bank. Gravel-based soil is well drained, yielding to the conditions that this particular type of vine needs. Merlot grows much better in the clay and limestone-based soils that are found along the right bank in the Gironde estuary region. This type of soil holds a much cooler temperature resulting in delayed ripening. Today, both wine grapes are grown in a variety of locations. Cabernet Sauvignon comes from a small and thick grape. This is why there is so much tannin in Cabernet, as the tannin is found in the skin itself. Merlot grapes must be picked immediately after ripening or they will over-ripen and lose their acidity (Sarah, 2014). We could not stay outside for a long because of the wind. We went to the back of the building to see the vinification. There were 3 different machines for crushing, pressing and fermentation outside and many inert vessels and French barrels inside for aging. They use French barrels. Bill Kavacsik said one French barrel costs $1,000. Most red wines are aged 22 months in the barrel at Sanninos. We had 6 glasses of tasting wine with a cheese plate. Bill Kavacsik mentioned how cheese makes wine taste better. Cheese improves the wine’s aroma. Cheese also changes the wines and makes them more enjoyable. Our last tasting wine was spiced wine. It was my first time to taste spiced wine. It was North Fork red blend wine, infused with cinnamon, nutmeg, clove, and allspice. They served it warm. It was sweet wine with high alcohol. My favorite tasting wine was a rose, 2017 Bianca Dolce. It is a semi-sweet rose made from 100% merlot grapes.

Sannino Bella Vita Vineyard is a small vineyard. It has a cute indoor area that has a nice size bar and comfy couches. The outside area has a large seating selection with a beautiful view of their vineyards. We could not enjoy it outside because of gale. I would definitely recommend this vineyard. I learned a lot about wine. Both Bill Kavacsik and Bill Sanok were very knowledgeable and friendly. Actually, Mei and Preeya bought the rose wine for my surprise birthday gift. I definitely recommend the rose wine. 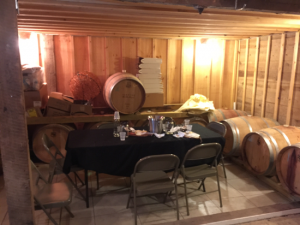 Testing Room The tasting room is small and cozy. 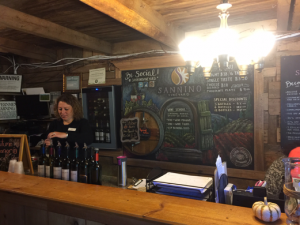 The Tasting Bar When you walk in, there is the tasting bar. The lady welcomed us with a smile. The tasting bar is small and cozy. There is a large window looking in on the wine making room. 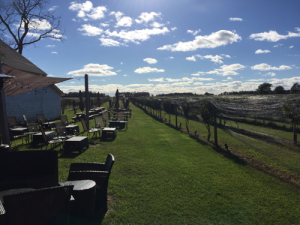 The Vineyard The outside area has a large seating selection with a beautiful view of their vineyards. 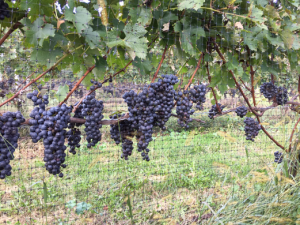 The Cabernet Sauvignon Grapes They cover the grapevines for protecting grapes from birds and animals. 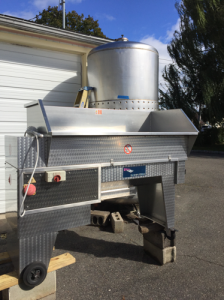 Equipments There are 3 different types of equipment for crushing, pressing, and fermentation behind the building. 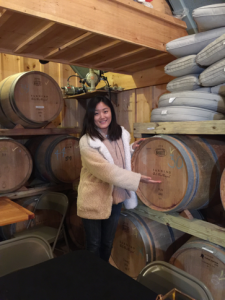 French Barrels One French barrel costs $1,000. Most red wines are aged 22 months in the barrel at Sanninos. There are a lot of the barrels inside. 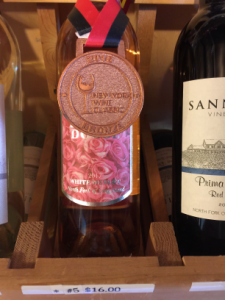 2017 Bianca Dolce Semi-Sweet rose made from 100% merlot grapes: this was my favorite tasting wine. It costs $16 plus tax per bottle.