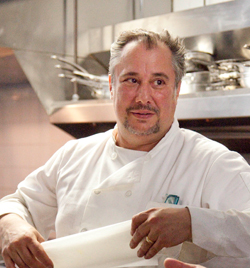 What Did He Do?

The first thing he did was make mozzarella cheese. He had hot water in a bowl with cheese and was mixing it so it can turn a certain way, then he drained the water and started making balls out of the cheese and putting it in cold water. He made probably about 20 little balls and left them n the cold water for a few minutes. He just started answering questions and talking about the history of pizza. Then he started cutting the balls into three pieces so that he can give everyone a piece. He added big black pieced of salt called lava salt, with oil on top of the cheese to give it more flavor. After that he started talking more and asked more questions. He talked about the different pizzas he does in his restaurants, he stated that he has three generations of pizzas on he’s menu. One generation I the Italian types like the Neapolitan pizza. The second generation us like the pizzas we eat now like pepperoni and the third generation is pizzas he creates on his own.

How Did I Feel?

I felt that it was a really good experience. It was the first time I’ve seen a person make mozzarella from scratch and also seeing the way he made his pizza. I really expected the cheese to be really good but I honestly wasn’t a big fan of it, however my friends loved it only because of the lava salt. On the contrary the pizza was good and it had me thinking that I might want to visit his restaurant maybe at least once. Over all I was glad I showed up to this Anna Nurse Workshop.

Ginette Castillo, but people also call her Ginie or Gee. She was born and raised in the Bronx and is currently 22 years old. She graduated The Bronx Guild High School (Inside Stevenson High School) with a GPA of about 3.7. She was able to attend different types of internships while attending The Bronx Guild. Being in this school, she realized what she wanted to major in college (which is baking). She has had internship’s in places like Marc Ecko, Columbia University, a dentist office, donors choose, a Mexican/American restaurant, a chef at senior center and so forth. The job she loved the most was working in William Hudson Senior Center with a very good chef. He taught her a lot and helped her to enjoy the culinary/baking world. She has had a passion of learning to cook and bake but it just hasn’t come clear in her mind and she’s determined to learn in college. Her reason for attending NYC College of Technology is because it was the closest and only school in New York that had cooking/baking together and she’s hoping that this is the school that will help her react her goal of being a great chef and baker. Besides being passionate in culinary; she loves to play softball, traveling, hanging out, attending Yankee and Mets games when she can, and baking cakes on her spare time. Her greatest accomplishment has to be graduating high school and getting everything done early, however something she looks back on was not graduating her third year of high school because of different reasons, but at least she was able to do all the senior actives like she wanted. She got to learn though that something’s happen for a reason and people learn from their own mistake. She’s very shy but when she gets to know you she will come out of her comfort zone and you will get to see how cool and real she can be. Whenever you see her around say hi and get to know her, she won’t bit =)
View all posts by Ginette →
This entry was posted in Uncategorized. Bookmark the permalink.