Out of the five borough New York City has to offer, Brooklyn is one where you can find historic significance. As it shows the importance of monuments and architecture along with the culture, food and music that was once here. 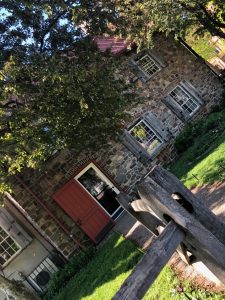 Located in Washington Park sits the Old Stone House. Which was built in 1699 by wealthy man named Hendrick Claessen Vechte and his farther Claes Arentsen Vechte. Where later on Hendricks son Nicholas than lived in with his wife throughout the Revolutionary War.  This house was known to be a Dutch family farmhouse. The family took advantage of land located nearby and occupied it for farming. The Vechte’s harvested oysters in Gowanus Creek, which was part of the town at that moment. They had also transported their produce to lower Manhattan. Being a part of war for American Independence, this house was a significance use to the United States Army as it stood during the Battle of Long Island during the Revolutionary War. Weapons, clothes, documents and artifacts can be found within the house. The Old Stone had been destroyed in a fire and rebuilt, but the remains were kept and is now presented as a remembrance. It is now the center of attention in kid friendly playground which now offers recreational facilities along with events and community involvement opportunities. 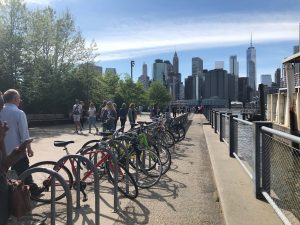 Designed by Michael Van Valkenburgh, Brooklyn Bridge Park was first a part of the port authority for cargo operations. Which then ended in 1984. It had been abandoned for a while with wearhouses and open space that was not in use, until the decision was made for it to undergo commercial development. Empire Stores and the Tobacco Warehouse were two civil war infrastructures that were kept and included into the rebuilding of the Brooklyn Bridge Park. The empire stores were built between 1868-1885 where goods like sugar, molasses, wool, rubber, and coffee were stored. The building was made with thick walls that included red brick and schist interior walls which kept the inside dark and kept at perfect temperature for the storage of produce. The Tabacco Warehouse remains without a roof today, and has kept it’s significance throughout the years and is a famous spot where tourists tend to take photos. At Brooklyn Bridge Park you can see multiple green space spots and piers that are sectioned off, while offering recreational facilities along with peaceful vibes. 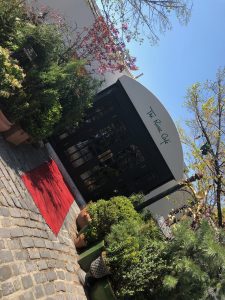 Located within the Brooklyn Bridge Park, you will find The River Cafe where it opened in 1977. Seen in an unseen area of abandonment The River Cafe grew as the years passed by producing and selling the fanciest types of meals. With fresh and exquisite ingredients The River Cafe has been classified as an American Cuisine on the East Coast. This Cafe is known to produce many of culinaries first such as the “free range chicken.” Breakfast, Brunch, Lunch and Dinner along with Dessert is offered by The River. Seafood is said to be their primary focus. If you’re looking for a high end type of Restaurant The River Cafe is perfect as you will also have to follow their casual Dress Code. 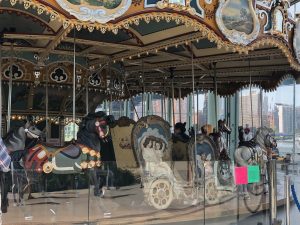 The home of Janes Carousel was originally in Idora Park located in Ohio and built in 1922, by the Philadelphia Toboggan Company. In 1984 the Carousel was purchased by a man named David Walentas who wanted something of historic significance to take part in his plans. Ms. Walentas then began to restore the look of the horses as when it was sold in bad condition. She restored the horses to their original condition by scraping off old paint called “Park Paint” which then exposed the original colors and carvings. Following the detailed descriptions of the 1922 carousel, the remodeling was based carefully on their findings. Now the mechanical systems of the carousel have been upgraded, along with bright lights all around. 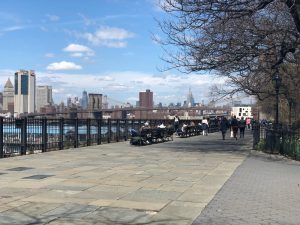 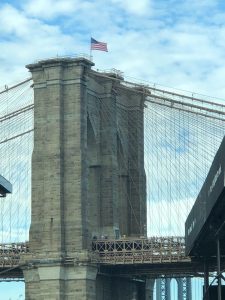 When New Yorker’s think of Brooklyn, we all think of the famous Brooklyn Bridge and how this bridge allows two boroughs to connect. Which is Manhattan and Brooklyn as this bridge crosses over the East River. Designed by John Roebling, this Bridge took fourteen years to be  constructed. It is known to be the first steel wire bridge. During this period of time, steel wire was chosen because that was said to be the strongest type of material compared to iron, which was used for other bridges. While the Brooklyn Bridge was in its building process many people were doubtful on a successful outcome. In 1883, the bridge was officially opened  to the public where people were proven wrong about their negative suspicions. Today the Brooklyn Bridge stands prominently. As it is known to attract many tourists and locals for it’s breathtaking views of Brooklyn and Manhattan. Bike riding across the Brooklyn Bridge is famous for a leisurely ride following with a scenic view, as it has separate paths for bike riders and walkers. On the bridge you can spot the Statue of Liberty and other significant buildings for example, The One World Trade Center. 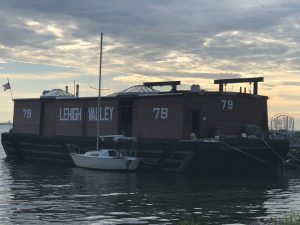 Founded in 1985, The Waterfront Barge Museum was used for educational and culture purposes.  The educational section focuses on the New York’s maritime history and its importance. The barge was built in 1914 and was the last wooden barge that still stays afloat in the New York Harbor. This Museum was once used to transport goods from New Jersey railroad terminals to New York City. During summer and spring free tours are offered, also when the barge is docked. The museum also offers special performances while showcasing events. Activities such as “juggling for fun” are available for you take take part in. 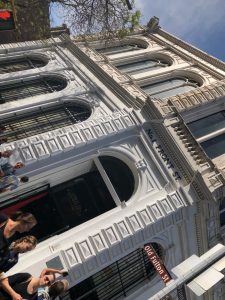 As a young boy Patsy Grimaldi, was known for his pizza making. Located in Brooklyn at 1 Front Street you can try an brick oven pizza. Originally Patsy wanted his business to be in Manhattan, but brick ovens were illegal at that time there. He then decided to do more research and found that Brooklyn was the perfect location. Grimaldi’s is located around the Brooklyn Bride area and  has been visited by many people as there is always a line to enter. 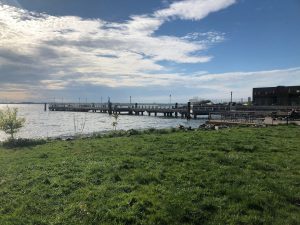 Louis Valentino, Jr Park and Pier provides views of the Statue of Liberty, Governor’s Island, New York Harbor, Staten Island and the Manhattan skyline. This park was known for the route that New York shipping industries used during the 1800’s to 1950. During the summer, kayaking tours along with movie screenings are open to the public at no cost.  In the park you can relax in the available grass space and walk out onto the pier for a more scenic view. 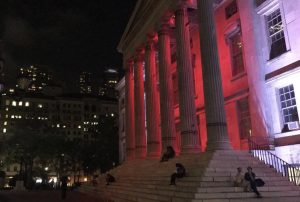 The construction of Brooklyn’s Bridge Borough Hall was built in 1848 as Brooklyn’s City Hall, following the architectural style of Greek revival. Today the Brooklyn Bridge Borough Hall has been accompanied by many people from all over that provided an amusing seating for a quick meal or resting spot, along with a great photo taking spot. Nearby restaurants and shops can be easily located in this area. As everything is close by and in walking distance weather you just want to grab food to go or dine in. 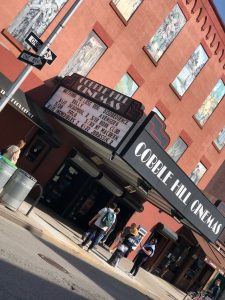 Originally this theater was called The Lido Theater, built in 1925.  This theater had became famous in the 1960’s when the neighborhood began to improve. In 1967 the theaters named had changed to the Cobble Hill Cinemas. This movie theater had successful and unsuccessful business over the years, but is now a well known theater for a brooklyn local. It is now a five plex theater and if you are looking for an escape from reality Cobble Hills Cinemas will provide you with that along with their unique and recent movie options.

One thought on “36 Hours in Brooklyn, New York”