This was shared with me by another Prof. Reid and I thought you should could consider starting now!

New York City is dubbed as the City that Never Sleeps which most of its citizens would consider accurate. From early Morning bustling students or workers to late night partiers or tourists, there is always something to do in the city at any time of the day. Some tourists take trips to New York with their families and in this article; we will explain some of the major sites to visit while in New York City so keep the children entertained and the adults sane.

Nintendo World Store
The Nintendo World store is located at 10 Rockefeller Plaza between 5th and 6th Avenue. It is accessible via the B, D, F and M trains to the 47-50 Streets Rockefeller Center train station. This two floor store houses two separate sections that both tie into the video game theme. The first floor has handheld video game demos and a section dedicated to the Pokemon franchise with plushies, bookbags and books. Upstairs is dedicated to other Nintendo franchises from Super Mario, Donkey Kong and The Legend of Zelda. They have board games, plushies, clothing, hats and bookbags as well. They also have the bigger platform systems like the Wii and the Wii U. The store can be hectic but it has enough space to roam around. The cashiers are also fast and efficient with a friendly demeanor. It is an excellent place to take kids to have fun and relieve stress. 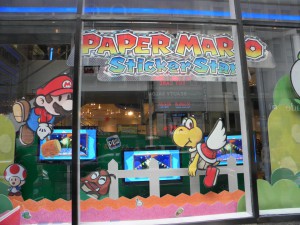 Madison Square Garden
Madison Square Garden is located at 4 Penn Plaza between 7th and 8th Avenue. It is accessible via the 1, 2 and 3 trains to 34th Street-Penn Station or the A, C and E trains to 34th Street-Penn Station. The arena is home to the New York Knicks basketball team and the New York Rangers hockey team. While both of these teams play from the months of October till June, they are much respected franchises in their respective leagues. Even if you’re unable to catch a game at the Garden, it is often a big place for concerts with musical stars such as The Who, Paul McCartney, Kanye West, Alicia Keys and more. This beautiful staple of New York City represents the excitement and livelihood of the area. 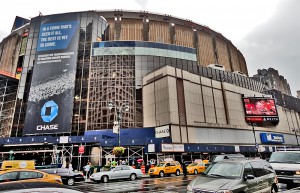 Bryant Park
Bryant Park is located on 41 West 40th Street between 5th and 6th Avenue. It is accessible via the 7 train to 5th Avenue or the B, D, F and M trains to 42nd Street-Bryant Park. The park has a large arrangement of small booths that sell different assortments of products from jewelry to food to art. There are seats around the park to sit and enjoy the beautiful scenery of the park. There is a skating rink for the winter time that can hold a large number of people so it would be excellent for families to enjoy. A restaurant also is located within the park which puts lush furniture over standard seating and has heating lamps if the weather is too cold for people. We can’t forget the New York Public Library for the adults who may want to read, just joking. 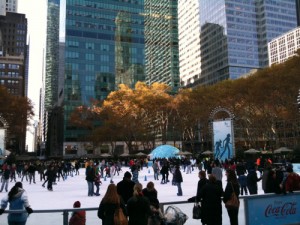 Bloomingdales’s
The main entrance to Bloomingdale’s is on Lexington Avenue between 59th and 60th Street. It can be reached by the N/R/W and 4/5/6 trains to 59th Street/Lexington Avenue or is easily walked to from many other areas in Manhattan. This beautiful department store has all your shopping needs ranging from fine jewelry and trendy women’s clothing to soaps and fine china. Cashiers can also arrange for your purchases to be shipped home for you. There is also a restaurant called David Burke at Bloomingdale’s “In the Box” that features a very inclusive relaxed menu. They have items ranging from cheeseburgers to crab cake sliders. It is best to be there weekdays before lunch when it is least crowded. 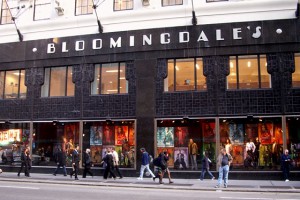 Dylan’s Candy Bar
When you are done shopping in Bloomingdale’s and chowing down at David Burke’s restaurant head right across the street to Dylan’s Candy Bar located on 3rd Avenue between 60th and 61st street. Dylan’s Candy Bar boasts a selection of over 3,000 different candies to choose from. On the top floor, Dylan’s also offers an ice cream bar serving milkshakes and frozen Belgian hot chocolate. For the adults, Dylan’s has an adult bar offering drink such as the Strawberry Nerds Margarita. The bar also gives a wonderful view of the New York streets below. 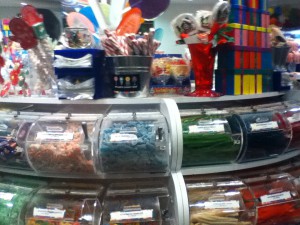 Central Park
Central Park is located in the heart of New York City and spans from 59th Street to 110th Street with multiple different entrances. It is accessible through multiple trains from the A, C, E, B, D, 1, 2, 3, Q, F, R and N trains all having train stations near the 59th Street area. Central Park’s massive space allows for different paths of travel with wide open fields and intricate natural beauties. It holds many facilities for different sports such as baseball, handball, basketball and volleyball. There are also playgrounds for the children around the park and a carousel as well. 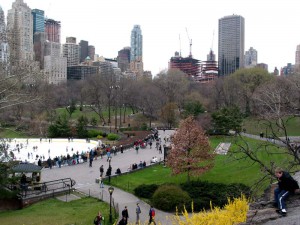 Broadway Theatre
The performing arts are synonymous to New York. What better way to experience Broadway with your child than going to see the Mary Poppins show. This show is filled with singing and dancing guaranteed to make this performance fun and entertaining; an experience the family will remember. Mary Poppins can be seen at the New Amsterdam Theatre, 214 west 42nd Street.

Hotel of Choice: Crowne Plaza Hotel
The Crowne Plaza Hotel is located on 1605 Broadway in Times Square. It is accessible through the Q, N and R trains to 49th Street and the 1 train to 50th Street. With 46 floors, a restaurant, a gym with pool and workout room and several other amenities, the Crowne Plaza Hotel is an amazing hotel for those with no real budget. Its location is close to the recommended areas to visit and its room rates are phenomenal. It has rooms for the disabled as well and it has ease of access areas if necessary. 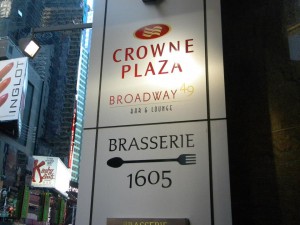 Recommended Schedule
With many of the main sites being near each other, they are all easily accessible to each other and only require some walking. Walking would be recommended because walking to the sites exposes you to other sites and neighborhoods that will later be recommended in this article.

Moving from the Crowne Plaza Hotel, the first area to visit would be the Bloomingdales because it allows shopping to be done and breakfast can be eaten there. It also one of the two sites that are farthest from the hotel, the other one being Madison Square Garden. If you start from Bloomingdales, you can move downwards and through the avenues to reach other sites easily. From the Bloomingdales, you can go to Dylan’s Candy Bar to explore the sweets flagship store.

The next area to visit would be the Nintendo World Store/Rockefeller Center area for the children to play some video games and expose themselves to other children. From there, Bryant Park would be the next area to visit to enjoy the scenery and beauty of the park while visiting the many booths and ice skating of course. Finally, a show or game at Madison Square Garden would end the day for the family, possibly eating before or after the game.

The rest of the hours left in the next should be invested to Central Park and possibly Times Square. With such a vast area to explore and different facilities to choose from, it will take some time to experience a majority of what Central Park has to offer. It is also a good way to end the trip for both the adults and children with the street performers and artists all around the park.

Other Recommended Sites
While there are many other sites in New York City to visit, we are just giving out recommendations to help tourists decide how to spend their time in the city. This guide isn’t perfect; we just want to allow people to formulate a good idea on what there is to offer and allow them to work from there. In case you are having trouble finding the link to the HR article it is found in the discussion section of the site at https://openlab.citytech.cuny.edu/groups/hmgt-1101-fall-2012/forum/topic/human-resources-reading/.

Museum at Fashion Institution of Technology.