The event I attended for this assignment was Pratt Institutes by Design Symposium 2017 “Design DNA: The DNA of Design.” The event was sponsored and moderated by Marc Rosen. The event was kind of like a TED Talk with very distinguished designers in their various fields in design. The speakers included Debbie Millman one of the top brand strategists in the country. Arne van Oosterom founder of Design Thinkers and DT Academy from Holland. Terry Young brand consultant and CEO and Founder of Data company Sparks & Honey was among one of the speakers. Last, but not the least was the amazing Paula Scher world renowned graphic designer most famous for her iconic logos and abstract paintings. The discussion was about design appreciation for all, design as a state of mind and everyone having an influence in design and its its meaning. 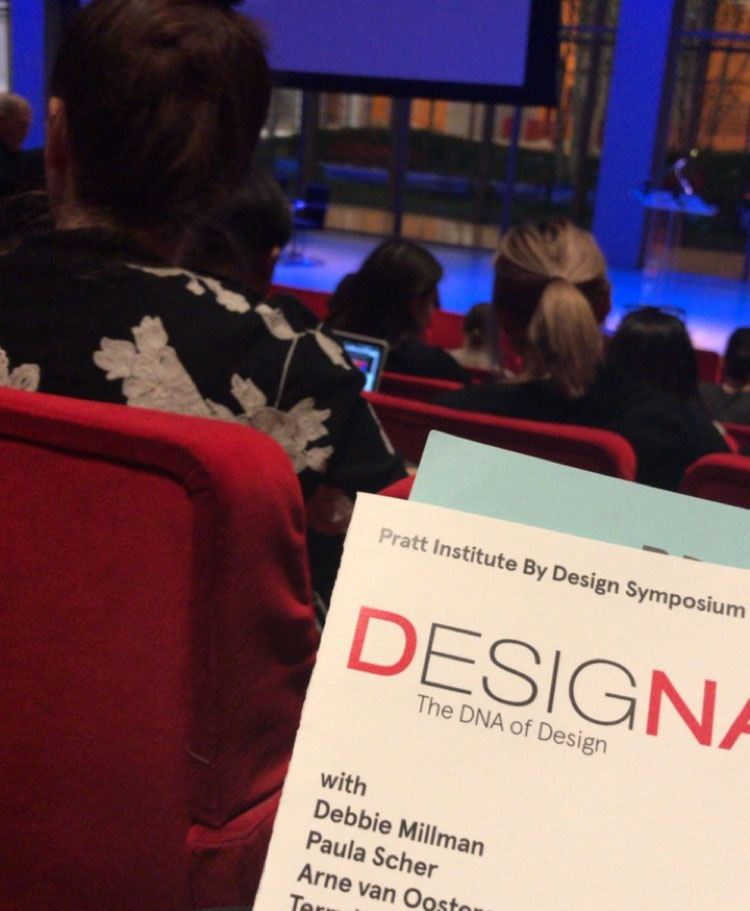 The key points I obtained from each speaker are the following. From Debbie I understood that branding today is no longer part of capitalism, it’s now about belonging to a group (tribe, religion, political party etc.) and if one as a designer can comprehend these things than “Branding can create a movement.” From Arne I realized that Designers are taught to question the question, and this should encourage us to value-co creation and that in the end your hiring a company to fulfill your need, and that design thinking is not about the shoe (reference to Nike). Terry Young opened my eyes to culture relevance and big data and how human patterns of here and now will help in the future to create better design for the masses. Lastly, what Paula Scher showed me was that people are not just a data in design and branding. People really can influence a design’s meaning. She gave the example of her Highline project was a conservation project for the low-income buildings around the highline and the people of New York, but the outcome didn’t come out how she has expected it. The highline is now known as a number one tourist attraction in NYC and it became very codified and elitist. She said, “It became excepted by the word but not by native New Yorkers.” I really enjoyed being part of this discussion and hearing from people in the industry what is expected to be next. 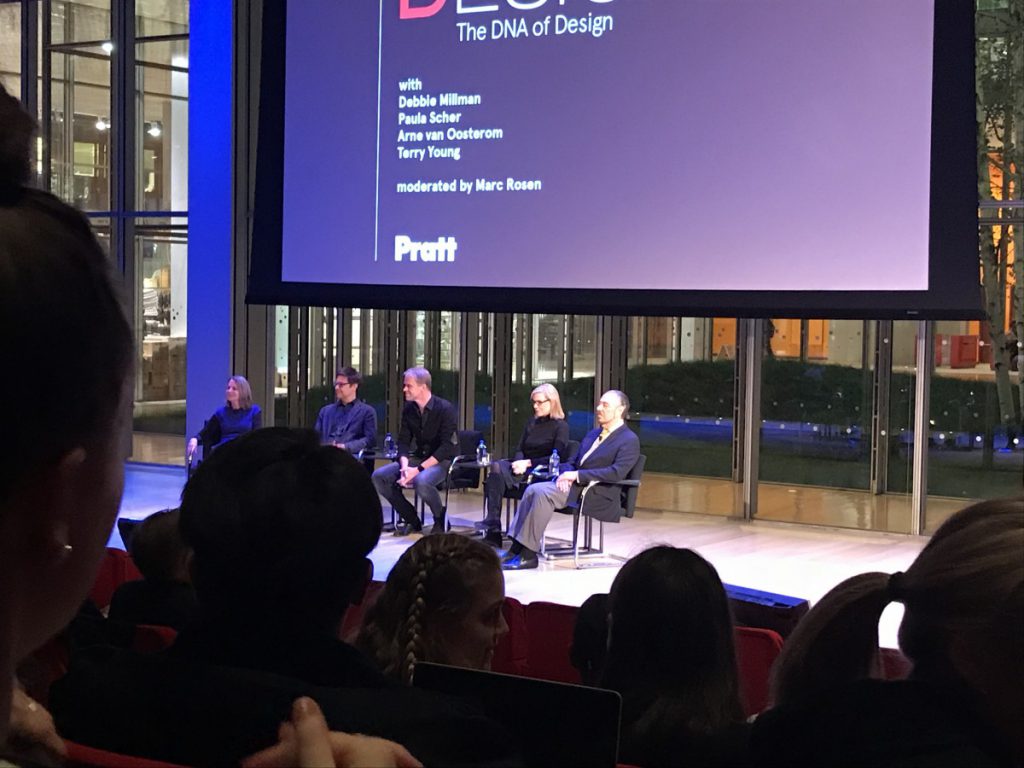 As the discussion ended people proceeded to the reception area for cocktail hour. My first instinct was to approach the two women sitting next to me for their business cards. Unfortunately, they weren’t prepared, but they really wanted to help me out with my assignment they gave me a random business card from there wallet. She handed it to me and said this is someone we work with sorry. That worked for a warm up, but I was still determined to get two legitimate business cards. I headed to the reception area my first instinct was to look for Paula, she wasn’t anywhere to be found.  I later noticed the speakers exiting, I approached Terry Young and Debbie Millman and I complimented them on the discussion. I than later proceeded to ask them about there day to day and popped the question.  I was hoping to kill two birds with one stone, but only Terry had a card Debbie was not prepared. I exchanged my card as well, but he failed to acknowledge me after he handed me his and left my hand in the air for 30 seconds, but it seemed like 3 hours.  First card down I later went by the light refreshments table and I casually bumped into Marc Rosen the moderator. I had read his bio from the program and he’s a professor at Pratt, so I lead with that. I stated that I was a student from City Tech that I don’t go to Pratt but I’m glad I took advantage to attend the event. I asked him about his scholarship program and obtained his card. I was ready to leave but I than saw Paula Scher. She was already talking to someone because who would miss an opportunity to talk to her. I waited 20 minutes and finally made my way up to her. I was flabbergasted and didn’t know what to say but I told her I learn a lot about her in all my classes and that I aspire to be as successful as her. She grabbed my arm and told me I can do it, which I won’t ever forget. I also thanked her for fixing the Rockaway’s since I’m a Queens native. I than subtly, told her about my assignment and how I’d like to wow my professor with her business card. She was very polite, but she said “Oh, I didn’t have the ones with the new address just yet.” Which in her defense its true, Pentagram did move recently? But I will always wonder if she just didn’t want to share it with me.

I’m overall grateful for this experience. As an introvert this was out of my comfort zone, but I’m glad I did it and I learned a lot from it. I have decided for myself that I’m not a cocktail hour small talker, it’s just not my thing it feels forced and fake for me. I feel like if I approached anyone else that wasn’t a speaker maybe they wouldn’t be as forthcoming or as prepared. This has motivated me to better my communication skills, so that when I do network and communicate its well received.