During the thirteenth century in Florence, Italy many painters portrayed biblical scenes in surrealistic settings through a Byzantine style. (Cimabue, Giovanni Cenni Di Pepo Is Part Of New Catholic Encyclopedia Supplement 2011). This style often contained the use of Gold and architectural spaces, closely resonating with the early medieval time period. These characteristics are seen in Cimabue’s painting “Virgin and Child Enthroned, and Prophets”. Through this painting, Giotto is able to combine the styles of the gothic and Byzantine era, as a means to present a similar idolization of Mary but in a different limelight mirroring the late medieval gothic style. Cimabue and Giotto depiction of the Virgin and child resonate with one another; however, Giotto shows a deeper understanding of perspective and exudes a greater sense of idolization of holy figures different than that of Cimabue’s painting.

The painting “Madonna and Child” by Cimabue was created in c. 1280 Galleria Degli Uffizi, Florence by the use of Tempura and gold on wood with dimensions of 12’ 7’ by 7’ 4’ to serve a purpose as a high center alter piece in the Saint Trinity church, similarly to the painting by Giotto, painted in c.1305 for the high altar in the church of Ognissanti with dimensions of 10’8 by 6’ 8 1/2 . (Stokstad Marilyn and Cothren Michael 287)

Cimabue’s painting depicts the Virgin Mary seated on a large throne, mirroring the architectural forms of the Byzantine era displayed through an ivory tone representing chastity, a symbol of purity, also depicted in Giotto’s painting by the two angels kneeling beside the throne offering vases contained with roses and lilies (Virgin and Child Enthroned, Surrounded by Angels and Saints Ognissanti Maestà). In her lap, rests Christ whom she is shown pointing to by her right hand as a means to direct the audience’s attention and acknowledge him as the way to salvation. Giotto, however, portrays Mary and Christ on a “pointed tabernacle”, referring to a place of worship, constructed with marble, rich in somber colors, representing the gothic style. In Cimabue’s painting, Christ exudes a sense of wisdom represented through the scroll of the law placed in his right hand and his adult facial features, similarly portrayed in Giotto’s painting. The clothes worn by Mary and Christ embody streaks of gold as a means to “reflect the light of heaven” (Khan Academy 2:03) whereas Giotto illustrates Mary in a less decorative drapery, hinting at a much darker tone balanced by the pastel pink clothing of Christ. Surrounding them are eight angels, four on each side in order to produce symmetry, a characteristic also present in Giotto’s painting through the equal division of angels and prophets on each side of the throne. This symmetrical alignment in the subjects of the painting is also seen by the tilted heads of the angels, congruent to their opposites, the prophets below Mary and Christ in Cimabue’s painting and in the architecture of the thrones in both paintings. Cimabue illuminates the angels through their distinct halos and vibrant wings, whereas Giotto presents the angels in a more human-like state by the hindrance of their wings. In Cimabue’s painting the prophets are seen from left to right as Jeremiah, Abraham, David and Isaiah (Virgin and Child Enthroned, and Prophets Santa Trinita Maestà), all of whom are holding “phylacteries with writings from the Holy Scriptures,” whereas Giotto intermingles them in the crowd of angels diminishing their importance. 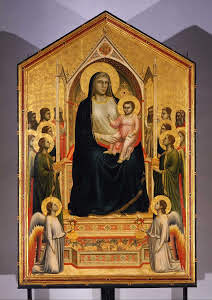 The way Cimabue presents his variation of the Virgin Enthroned differs from that of Giotto’s in that Cimabue strays away from a realistic perspective. In Cimabue’s painting there’s a certain disproportionation given to the Virgin Mary that allows the viewers to envision her elongation if she were to stand (Khan Academy 2:24), whereas in Giotto’s painting we’re presented a naturalistic figure of Mary’s prominent through her physically features such as the highlight of her breast, around her knees and around her head where the drapery falls. The throne that the Virgin Mary sits on also shows an understanding of a more Three-dimensional space through its representation of steps, whereas in Cimabue’s the perspective is altered by the four prophets that are depicted underneath Mary conveying an unrealistic view. In the article, it says, “An astonishing areas of the picture is given over to the architectonic throne in which, for the first time in Italian Art, the artist thoroughly examines perspective recession” (Stubblebine, H. James 97). In Giotto’s painting, the angels help exude this perspective through the masking of angels by the halos, allowing the audience to acquire a deeper understanding of foreground and middleground. There’s also a distinct attention to each angel whom, although are depicted in similar clothing, portray different beings, with different facial features, a characteristic hindered in Cimabue’s conveyance of angels, which present an idealistic view of the angels, who are all similarity alike. In Cimabue’s painting, the angel all seem to be stacked on top of one another seeming as if they’re floating, adhering to a more two-dimensional space seen also through the lack of physicality of Mary’s figure.

With the induction to the prior, we can concur that although both paintings beautifully portray their version of the Mary Enthroned, Giotto di Bondone does so in a way that allows his viewers to perceive Mary as an idolized figure. He’s able to do this through various aspects such as focusing on the gaze of the angels and prophets, having a sense of light and shadow, and being able to portray a three-dimensional space onto a two-dimensional canvas, a characteristic not evident in Cimabue’s piece. Through this piece, Giotto di Bondone was able to establish a different style of painting during the proto-renaissance period that allowed a greater understanding of art that eventually progressed and flourished into the Renaissance Period.